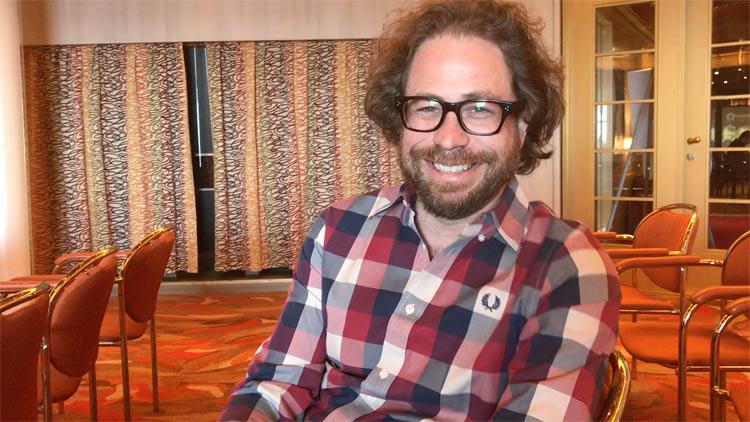 Jonathan Coulton, the singer-songwriter who puts the JoCo in JoCo Cruise each year.

Earlier this month I spent a week on JoCo Cruise, the annual gathering of superfans of indie musician/singer/songwriter Jonathan Coulton, along with diehard fans of board games, alt rock, comedy, knitting, magicians and other odds and ends.

Over the past seven years the JoCo Cruise has grown from about 350 people to nearly 1,700, enough for the backers to charter the entire ship — Holland America's erstwhle Westerdam — this time around. Our weeklong sailing took us from San Diego to Cabo San Lucas and Loreto, Mexico, scene of the first land-based JoCo Cruise music & food festival, fancifully dubbed JoCoachella.

On the final full day of the cruise, I sat down with Jonathan Coulton for this 11-minute video interview. (Production note: This was shot with my iPhone 7 without a tripod ... which led me to order a portable tripod today.)

Coulton: It's a ‘floating ComiCon without the lines’

Coulton, who's warm, personable and self-effacing in person (and charmingly genuine on stage), discussed the genesis of JoCo Cruise, what happens behind the scenes, how the event attracts rock stars like Aimee Mann and Ted Leo ("they're secret nerds themselves,") how JoCoachella came together, and plans for 2018. I also had to ask him about my favorite show of summer 2016, "Braindead," which unfortunately CBS deep-sixed; Coulton wrote and performed the hilariously entertaining "previously on Braindead" weekly recap.

A few Coulton snippets from our talk:

‘It's an exciting time to be an artist. For the most part you can get all the tools you need to ... become the master of your own career in an unprecedented way.’
— Jonathan Coulton

"When I first started as a professional musician, it wasn't clear how you could make it as an artist without a record label. I always used the tools available to me on the Internet, whether it was blogging or social media to stay directly in touch with fans. For people like me who have a small global fan base, I can pull all those people together on the Internet and I don't have to sell out Madison Square Garden to make a living."

"It's an exciting time to be an artist. For the most part you can get all the tools you need to make your art at home and you can publish and promote yourself and it really lets you become the master of your own career in an unprecedented way."

Coulton, whose hits include "Code Monkey" and "Re: Your Brains" (as Wikipedia tells us), has a new album, "Solid State," due out on April 28. "It's about Internet trolls and how the Internet stopped being a utopian society and became a dumpster fire of angry people, and what is next for humanity," he said. Here's a taste of one track, "All This Time":

The next JoCo Cruise will take place Feb. 18-25, 2018, aboard Holland America's Oosterdam, sailing from San Diego to the Mexican Riviera. In addition to Coulton's collaborators, the talented comedic musical duo Paul Sabourin and Storm DiCostanzo — who do much of the heavy lifting in organizing and executing this seven-day floating music concert — actor Wil Wheaton will be on board and rumor is that John Hodgman may be back.

Once again they'll charter the entire ship, so book your tickets now before it sells out.

JD Lasica
I'm CEO of Agile Travel Group and co-founder of Cruiseable. Follow your cruise bliss to any land where it may lead. Let's connect! I'm @jdlasica on Twitter.