Nassau is both the capital and largest city in the Bahamas. Nestled on New Providence Island, Nassau is a tantalizing treat for travelers looking for fun in the sun mixed with local culture and shopping. From the cool ocean breeze beckoning you to go for a swim or the city’s iconic landmarks, Nassau is home to a variety of adventures.

And while Nassau isn't everyone's cup of tea — it's often crowded and not as pretty as some Caribbean ports — the city is one of the biggest cruise ports in the Caribbean. On a busy day, it's not unusual to see five, six or even seven cruise ships at Prince George Wharf Cruise Terminal, adding 20,000 to 25,000 tourists to the city's population of 260,000. This city's main business is tourism, and there is plenty to explore both in the city and in the sand and surf around and beyond it.

Cruise lines that call on Nassau

The following cruise lines have ships that call on Nassau, capital of the Bahamas:

Things to do & see in Nassau

Connected to mainland Nassau by a 600-foot bridge, the 685-acre Paradise Island features a casino, aquarium, golf course, and many dining and shopping opportunities. Here you can visit the stunning Atlantis Hotel, famous for its striking architecture and wealth of indoor and outdoor activities.

Due to the Bahamas' strategic location near trade routes and its multitude of islands, Nassau became popular for pirates in the 17th century, most notably Edward Teach, better known as Blackbeard. The Pirates of Nassau Museum celebrates the "golden age of piracy," which took place from 1690-1720. Nassau was a lively pirate town and this little city recreates the bawdy days of swashbuckling and philandering.

Get up close to the city’s exotic wildlife of flamingoes and reptiles at the Ardastra Gardens, Zoo and Conservation Park. Located on Chippingham Road, it features five acres of lush, tropical gardens and all kinds of exotic life. The pink flamingos, native to New Providence, were almost extinct in the 1940s, until an endangered species program began on the island. Now, at the Ardastra Gardens, you can see these Flamingos prosper in their natural form. Other fascinating life in the Gardens includes boa constrictors, macaws, honey bears, lemurs, and crocodiles, along with gorgeous trees and flora.

The areas surrounding Nassau are some of the most fabulous water sports centers in the entire world, whether you want to scuba dive, deep-sea fish, swim or water-ski. Cable Beach is the most popular beach on New Providence. In addition to a magnificent beach, you can find a casino, restaurants, bars, and an arts bazaar here as well. Paradise Beach is more secluded and peaceful than Cable Beach, with tranquil waters perfect for an afternoon swim.

Kennedy Gallery (242-325-7662) on Parliament Street is a fabulous place to purchase all sorts of original artwork, limited edition handcrafts, sculptures, and pottery. Festival Place draws many shoppers with its colorful displays of genuine collectibles while offering a taste of some of the Bahamas’ treats. Straw Market also reflects the heritage of Nassau’s early inhabitants with genuine crafts created by its locals.The Brass and Leather Shop (242-322-3806) at 12 Charlotte Street features English brass, luggage, briefcases, belts, and other nice accessories.

The gastronomy of Nassau is a cultural adventure.   Be prepared to satisfy your pallet with traditional Bahamian delicacies dripping with flavor. Restaurants like Bahamian Cookin’ and Bahama Grill Café specialize in Caribbean cuisine; however, if you're craving something different, there are lots of restaurants with varied offerings.

Graycliff, on West Hill Street, is considered the finest restaurant in the Bahamas. The pheasant and lobster are winning dishes. Enjoy an after dinner cigar; their collection of Cuban cigars is reportedly the most extensive in the world. Sun And is a restaurant with an interesting name and an even more interesting menu. Located on Lakeview Drive, local favorite Sun And (242-393-1205) has the best conch chowder in Nassau. The braised duckling in raspberry sauce and grilled veal chop are also excellent.

The weather in Nassau is usually best between May and November, as December through April can get slightly chilly. Crowds and prices dip in May. However, the weather is typically beautiful all year round. 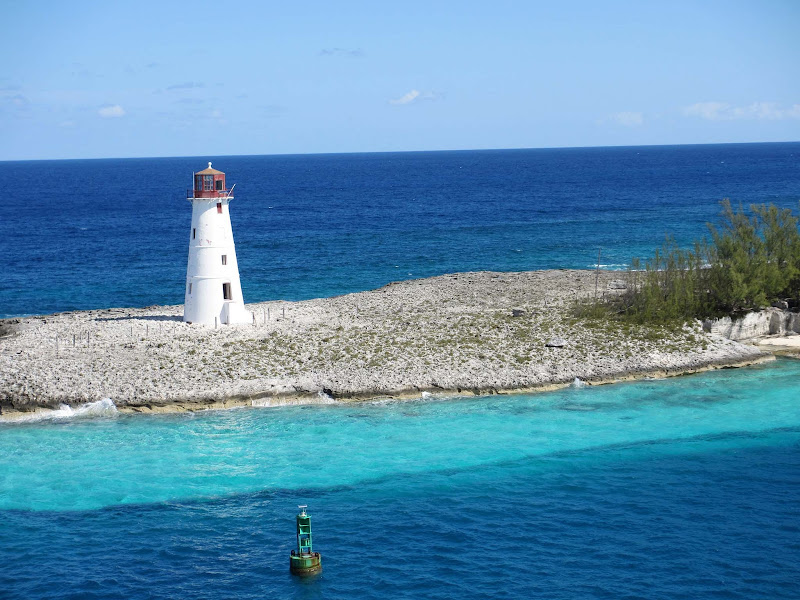 Michael Nienaltowski / Creative Commons BY-NDLighthouse near Nassau, the capital and largest city in the Bahamas.

All cruise ships dock right in downtown Nassau at the Prince George Wharf Cruise Terminal within easy walking distance of the major shopping and tourist areas.

Taxis and minivans are plentiful and can be found and hailed everywhere. You can identify them by their yellow license plates and black “Taxi” lettering. Some rates are fixed by law and are posted in the cruise pier. For other routes taxis are equipped with meters but drivers will usually refuse to use them, so agree on the fare in advance.

Jitney buses are a common form of public transport in Nassau. These run at 30-minute intervals between the downtown area to Cable Beach and Paradise Island from early morning until about 7 pm. Fares vary, though they’re generally about $1.25 per person each way, depending on the route. Exact change is required or you will need to overpay when leaving the bus.

The Nassau Water Taxi departs every 30 minutes from the west side of the cruise pier for Paradise Island. The Water Taxi service operates daily from 9 am to 6 pm. The roundtrip cost is $6 and it takes about 10 minutes each way. However, the operators give you a bit of a tour along the way, showing off celebrity homes and movies shot in the area.

Passports: All U.S. and Canadian citizens need a passport to enter.

Store hours: Most stores are open from 9 am to 5 pm Monday to Saturday and closed on Sunday.

Tipping: The usual tip for service from a taxi driver or waiter is 15%. Many hotels and restaurants automatically add a 15% gratuity to your bill, so be sure to check.

Safety advice: Pickpocketing and theft remain the most common crimes perpetrated against tourists, but otherwise Nassau is considered safe. As always be aware of your surroundings and leave expensive jewelry, most credit cards and extra cash on your ship.

Have you been to Nassau? Please share a story, tip or discovery. Any advice for first-timers?

“Plenty of people visit Atlantis without ever setting foot in one of its gaming areas. They’re there for the beach, the pools, the water slides, the sun and what the resort claims is the largest open-air aquarium in the world.”

“The island is small, so driving from far north to far south is as easy as it is essential to see the crowds thin out. Some of the best snorkeling is off the southwest coast at Stuart Cove.”

“A mere mile from the cruise-ship terminal, this bustling stretch of waterfront stalls tucked under the Paradise Island Bridge is a world away from duty-free shops and glitzy resorts. Locals come to buy fresh seafood and produce, and enjoy a truly Bahamian lunch.”

“Play croquet on the Rosewood's U.S.-regulation lawns. Then head to the hotel's Riva Bar for a Dark'n'Stormy made with Bahamian rum.”