Fiji: Tropical paradise with the friendliest people on earth

Health advisory: Tourism to Fiji is expected to resume in late 2021; see Fiji Travel for details. Tourism Fiji is working with airlines to streamline protocols for visitors, who will be required to be fully vaccinated.

The South Pacific island chain of Fiji just might be the closest to paradise I’ll ever get, unless I catch St. Peter napping at the pearly gates. About 1,600 miles east of Australia, Fiji's 333 idyllic islands (110 of which are inhabited) are made for romance and destination weddings, and they're also perfect for travelers looking for an active vacation or for big swaths of relaxation. A few years back I decided to splurge a little by heading to the South Seas for two blissed-out weeks. 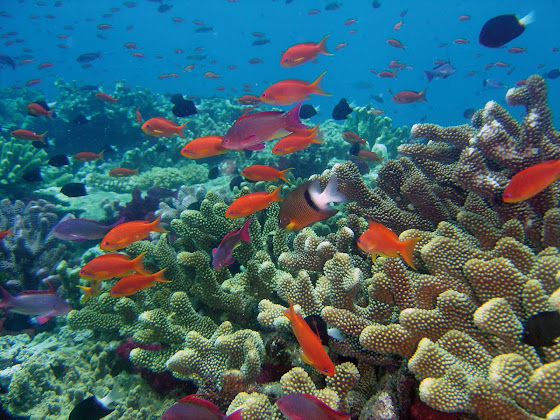 Fiji is a good vacation choice for several reasons. The place is drop-dead gorgeous. Despite that, it hasn’t been overrun with tourists (Hawaii, by contrast, gets 20 times more visitors). They speak English everywhere here (a former British colony, Fiji became a parliamentary democracy in 1970). And there's lots to discover: You can spend days exploring the main island of Viti Levu; kick back at the water sports mecca of Castaway Island; or take a four-day Blue Lagoon cruise to the northern Yasawa Islands. I did all three, and each was worthy of a full vacation by itself.

Cruise lines that call on Fiji

Here are the cruise lines with ships that call on Fiji: 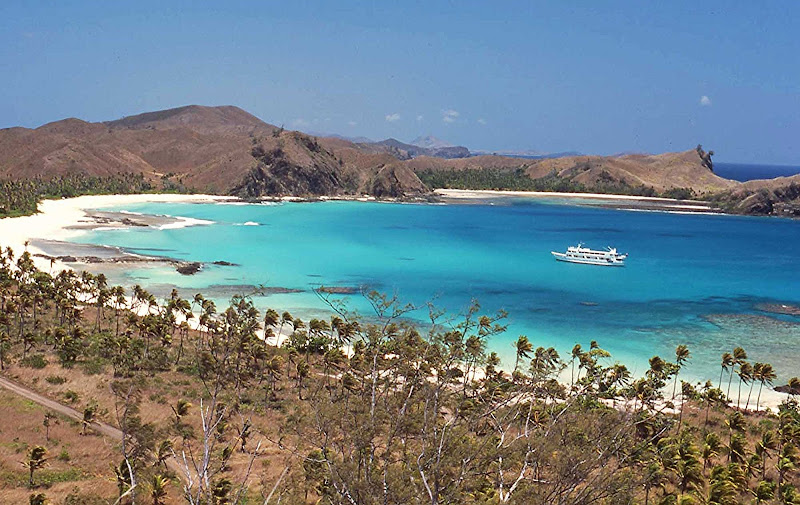 Top things to do & see in Fiji 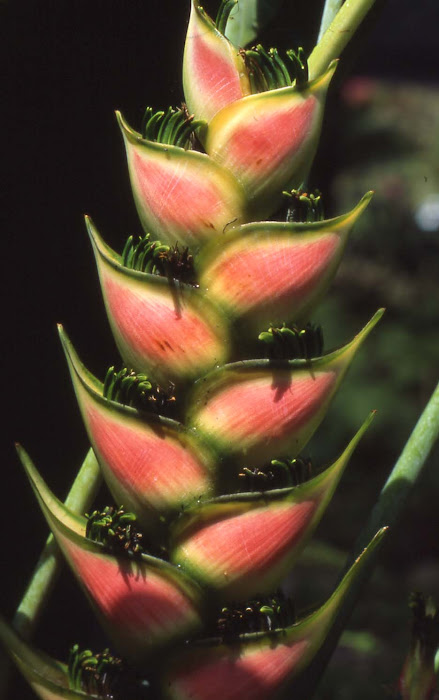 JD Lasica / Special to CruiseableA lobster claw, or heliconia, at Fiji's Garden of the Sleeping Giant, home to 25,000 species of flowers.

The charms of Fiji are widely dispersed: You can enjoy a week in Fiji without ever visiting the capital of Suva. If you do, you'll find a city of lush parks, wide avenues and colorful markets. The Fiji Museum, set within the Victorian-era Thurston Gardens, contains traditional canoes, war clubs and tattooing tools. Perhaps most interesting are the remains of the H.M.S. Bounty, which sank in 1789.

By day, lots of folks shop for jewelry and handicrafts from all over the South Pacific. If you're not heading out for scuba diving or snorkeling, consider a swim in one of the area's gorgeous outdoor pools. The best is the Suva Olympic Pool, behind Old Town Hall in the heart of the city. When the stars come out, the restaurants get hopping and the clubs get going. While Suva is on the island's rainy east side, the weather is generally pretty great, and the area is one of the premier places in the South Pacific to scuba dive and snorkel.

One of the highlights of my visit to Nadi, on the west coast of Fiji's main island, was a trip to the Garden of the Sleeping Giant, a botanical garden of 25,000 species of flowers just north of Nadi that originally belonged to actor Raymond Burr. The grounds are ablaze with pink ginger and red parrots beak, sweet-scented cattleya orchids and buttery dancing ballerinas. You won't see these at your local park!

Diving in the Beqa Lagoon is an otherwordly experience. Accessible only by boat and surrounded by rainforest and tropical gardens, the all-inclusive Beqa Lagoon Resort is set on a secluded island with no towns or roads, just garden-, pond-view and beachfront bungalows with private gardens, sun decks with hammocks and private pools.

Snorkeling: Fiji is famed for its coral reefs — and with good reason. You’ve heard of schools of fish? We’re talking universities here. At every spot I snorkeled, while the currents ran hot and cold like a crazy spa, tropical fish flashed by in breathtaking numbers and colors: plum-spotted leatherjackets, snub-nosed parrot fish, yellow-striped butterfly fish, needle-nosed garfish that came up as if to kiss my snorkeling mask. 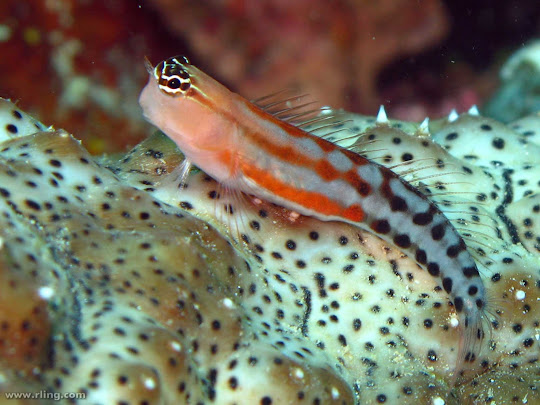 At Liku Lagoon, a sweep of white sand stroked by mint waters, I followed a school of Day Glo fish along a 10-foot-deep trench to a spot where a half-dozen bright blue starfish rested. Jutting up on both sides of the trench were sandy rock outcroppings covered with coralheads in shades of cinnamon and olive, some corals shaped like antlers, others like blue-tipped brainstems, still others like cabbages and broccoli and spindly porcupines.

I've gone snorkeling in lots of spots in the Caribbean, Hawaii and the South Seas, but none have come close to Fiji. You can bring your own snorkel, mask and fins, or rent them at a fairly modest cost at scores of rental places around the islands.

Scuba diving: There are lots of first-rate snorkeling and diving sites all around the island. Scubahire Ltd., a reputable company at 75 Marine Dr., Suva (679-336-1088), offers both half-day and whole day expeditions. Scubahire offers several PADI courses, and the instructors are all experts in the sport of scuba diving. You'll find lots of other good choices throughout both the main island and outlying islands. Serious scuba divers head to the Great Astrolabe Reef on Kadavu island, known for its manta rays, billfish marlin and whales; Aqua-Trek runs expeditions there at (800) 541-4334.

Water sports: Fiji is water sports heaven. Windsurfing, waterskiing, surfing, paddleboats, sea kayaks, parasailing, jet skiing, seaplane rides — you name it, you'll find it on one of Fiji's islands. The Mamanucas in particular brim with choices. Hard-core surfers head to Tavarua island, which has two of the top 10 surf breaks in the world.

At the end of the day, after the tangerine sunset melts into dusk, the sky flames up with constellations that will blow you away. 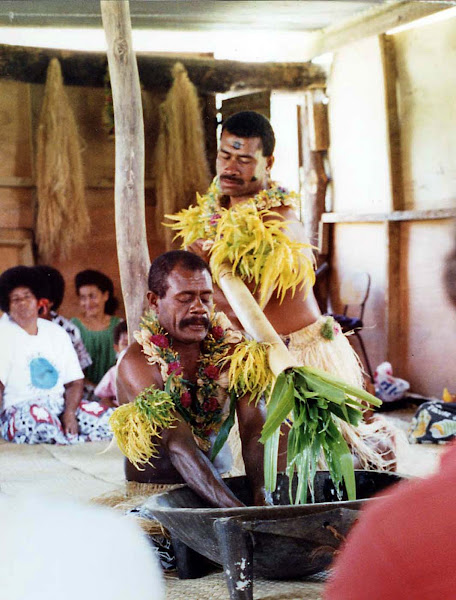 JD Lasica / Special to CruiseableThe ceremonial mixing of kava, made from the crushed root of the pepper plant, in Namuamua, Fiji.

At some point during your visit, you'll likely be entreated to attend a traditional kava ceremony. Expect to enter a bure (thatched hut) where Fijian men wearing grasslike costumes made from tapa and croton leaves, their faces smudged with black, will produce bowls of kava, made from the crushed root of the pepper plant. Fijians wolf down kava like we drink coffee, and which it's nonalcoholic, it'll numb your lips and taste like bitter dishwater. Ah, cultural immersion!

During my travels I mostly enjoyed communal meals. The food was wonderful: chicken curry, sweet potatoes, tuna sandwiches, bananas, rourou (a spinach-like dish made of taro leaves and drenched in coconut milk) and breadfruit, a starchy white fruit that tasted like baked dough. Try some of the local delicacies during your visit: paulsami (baked taro leaves marinated in lemon juice and coconut milk often with some meat or fish filling and a bit of onion or garlic), kokoda (fish or other seafood marinated in lemon and coconut milk), and anything cooked in a lovo or pit oven.

If you'd prefer a sit-down meal, Tiko's Floating Restaurant and Steakhouse, at Sukuna Park in Suva (679-331-3626), serves fresh seafood and succulent steaks. The setting is ideal: Tiko's is a boat on the harbor that sways calmly on the Suva waters with live jazz. Vine Yard Palace, in Old Town Hall, is a popular outpost that serves traditional Cantonese.

The Government Handicraft Centre, at MacArthur Street and Victoria Parade in Suva (679-331-5899), has a wide selection of pottery, woodworking pieces and woven items. On the western end of the island, the Nadi Handicraft Market offers woven pandanus baskets, mats, traditional tapa cloth and other goods. Boutiques and high-end handicrafts can be found at Port Denarau. In the Yasawa Islands I purchased a traditional carved bowl and set of Fijian war clubs that I've mounted on my wall at home. Make sure to get the backstory! 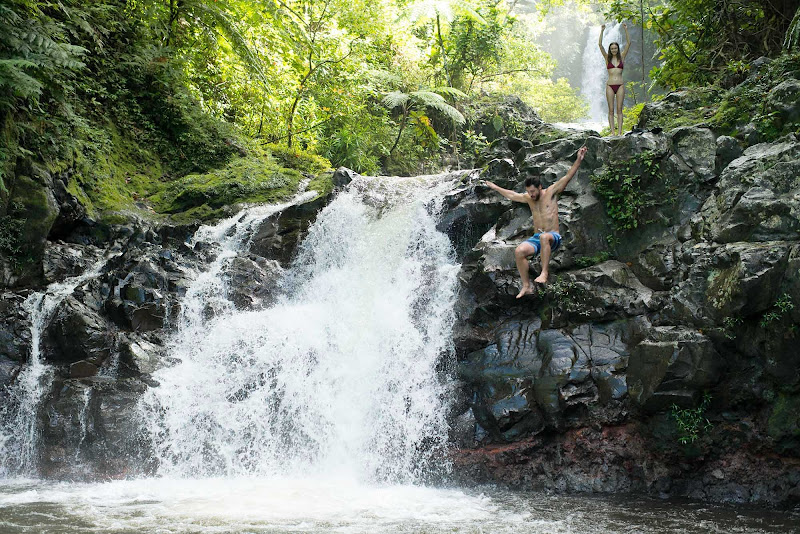 Courtesy of Tourism FijiCome to Fiji and race a waterfall.

High season: May to October (the dry season)

Temperatures in Fiji don’t vary much all year long: upper 70s during the day, 60s at night. The low season tends to be a bit wetter, with balmy, sunny days sometimes interrupted by sporadic showers. But the low season is still a fine time to visit. During my trip in November, we had 14 days of sunshine.

On the main island, cruise ships dock at the Port of Suva.

Public transportation in Fiji includes buses, “share taxis” and private taxes. Suva is served by a rather efficient local bus system that can take you around the island. Want to rent a car in Suva? Contact Avis (679-331-3833) on Foster Road. Just remember driving is on the left side of the road.

Language: Although the official language of the country is Fijian, English is taught in all schools and is spoken everywhere.

Safety: Fiji is one of the safest travel destinations in the world. You'll want to exercise the usual precautions against petty theft.

Have you been to Fiji? Please share a story, tip or discovery. What was the highlight for you? Please share in the comments below.

“More than 4,000 square miles of coral reef are home to an immense range of marine diversity, from 1,000 species of fish to several hundred varieties of sponges and coral. Fiji, in fact, is known as the 'soft coral capital of the world' and is renowned for its Great Astrolabe Reef.”

“In spring 2018, Lindblad Expeditions/National Geographic is scheduled to begin a series of cruises to the South Pacific, including stops in Fiji’s lesser-visited islands like Taveuni and Beqa, while Fiji Airways inaugurated a new direct flight to Fiji’s Nadi International Airport from San Francisco in fall 2017.”

“Each night, the rain comes down, and that sound in the jungle is the second most peaceful sound I've ever fallen asleep to, like the reassurance of true love snoring softly. And each morning, the sun rises into a perfect, cloudless sky. Bula.”

“Tige points to his map again, and says we're headed for Taveuni to the east, the first of our old-Fiji stops. When we arrive after a long and lonely leg of our cruise, Tige says we're in for some of the best diving in the world.”