The Amalfi Coast in southern Italy is as much a state of mind as an actual place. The endlessly deep blue of its sea vistas, the confetti colors of towns rising out of the cliffs and its seemingly endless sunshine make it the “go-to” place for an escape from the rigors of everyday life. And it’s had that image have made it a vacation haven for two centuries. It’s been both an escape and an inspiration for all sorts of artists from the 19th century to today — Giovanni Boccaccio, Richard Wagner, Pablo Picasso, Gore Vidal and plenty of others.

Besides its namesake port of Amalfi, Positano is another busy port along the Amalfi Coast. Positano, once a sleepy fishing village, is now one of Italy's most popular resort towns. You've seen it in "The Talented Mr. Ripley." Built into the steep seaside slope, it offers amazing views, especially if you walk or take the bus to the top. Frenetic Naples is about two and a half hours away from by bus. But you'll want to  stick close by.

You'll do well by making Sorrento your home base. It offers great restaurants, a few nice if pebbly beaches and plenty of charming shops.

Cruise ships that call on the Amalfi Coast 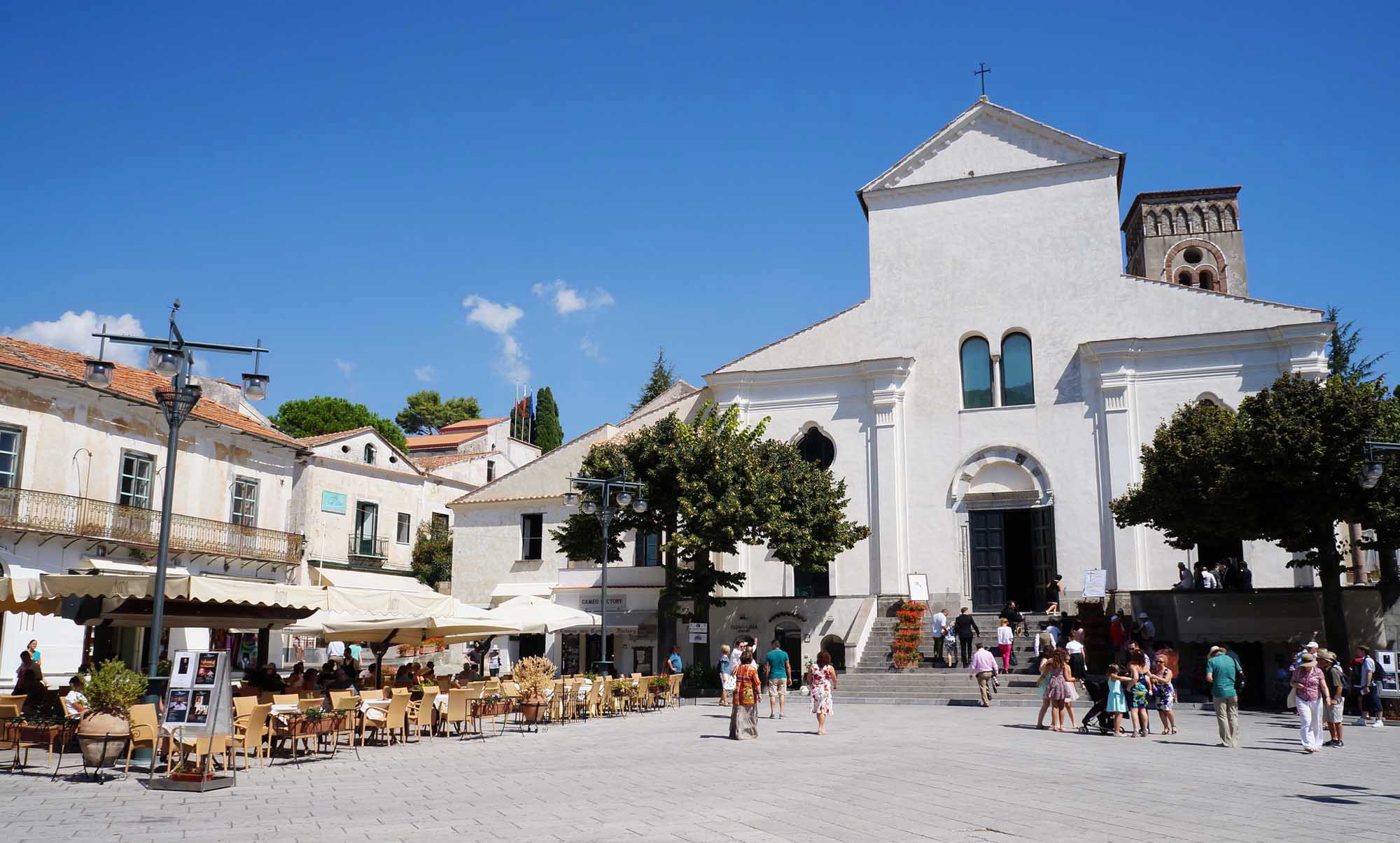 What to do & see along the Amalfi Coast

This stretch of southern coast along Italy’s Gulf of Salerno, is mix of cliffs, sea and picturesque villages, with small beaches tucked in here and there. The two major ports on the coast are Amalfi and Positano; this stretch of the Amalfi Coast is its busiest.  There are smaller and equally attractive villages such as Cetara, Minori and Praiano.

The easternmost village is Vietri sul Mare, followed by Cetara, both popular tourist towns. Continuing west, you’ll enter the Bay of Amalfi and find Maiori, Minori, Atrani and Amalfi. Continue from Amalfi to Positano, located in deep cove. This is one of the world’s most-visited stretch of seacoast, particularly in the spring and summer, when there are many art and cultural events. The fun begins when the sun goes down on the Amalfi Coast. At one bar (actually built into a cave that overlooks the ocean) New Age music meets age-old fishing techniques when local fishermen pull up nets full of seafood at the very edge of the dance floor. There are Irish pubs, wine-and-beer bars and wonderful restaurants.

The Amalfi Coast is on the UNESCO World Heritage List for its exceptional Mediterranean landscape. In the course of history the seaport Amalfi was traditionally an important trading power in the Mediterranean. As early as the seventh century Amalfi came to be feared as a maritime power. In 839 AD it won independence from the Duke of Naples and grew into a thriving republic. During the 1920s and 1930s, British upper class and aristocracy used to enjoy their holidays in Amalfi. The seaside view on Amalfi shows a picturesque Mediterranean town, with medieval architecture at its center. The town is neatly built into the rocky shoreline. So, if you fancy visiting the historical center, make sure to wear comfortable walking shoes for the many stairs and steps.

Dining out is a major part of the Amalfi experience. You’ll find some of the world’s best fish and seafood here. Tucked into the narrow streets of small villages are creative chefs producing menus based on whatever the fishermen brought in that day — pasta and clams, fish sauce and pesto. Other restaurateurs bring a contemporary twist to regional classics. Try Eolo (closed during the winter) for excellent seafood, or for a Michelin-star experience, La Caravella.  For cheap eats, Cuoppo d'Amalfi at Supportico Ferrari 10, phone +39 334 626 1440, is a good bet.

A well-known product in Amalfi is Limoncello liqueur. The area is famous for the cultivation of lemons, which grow in terraced gardens. Another product with a long tradition is the hand-made paper of Amalfi, called Bambagina. 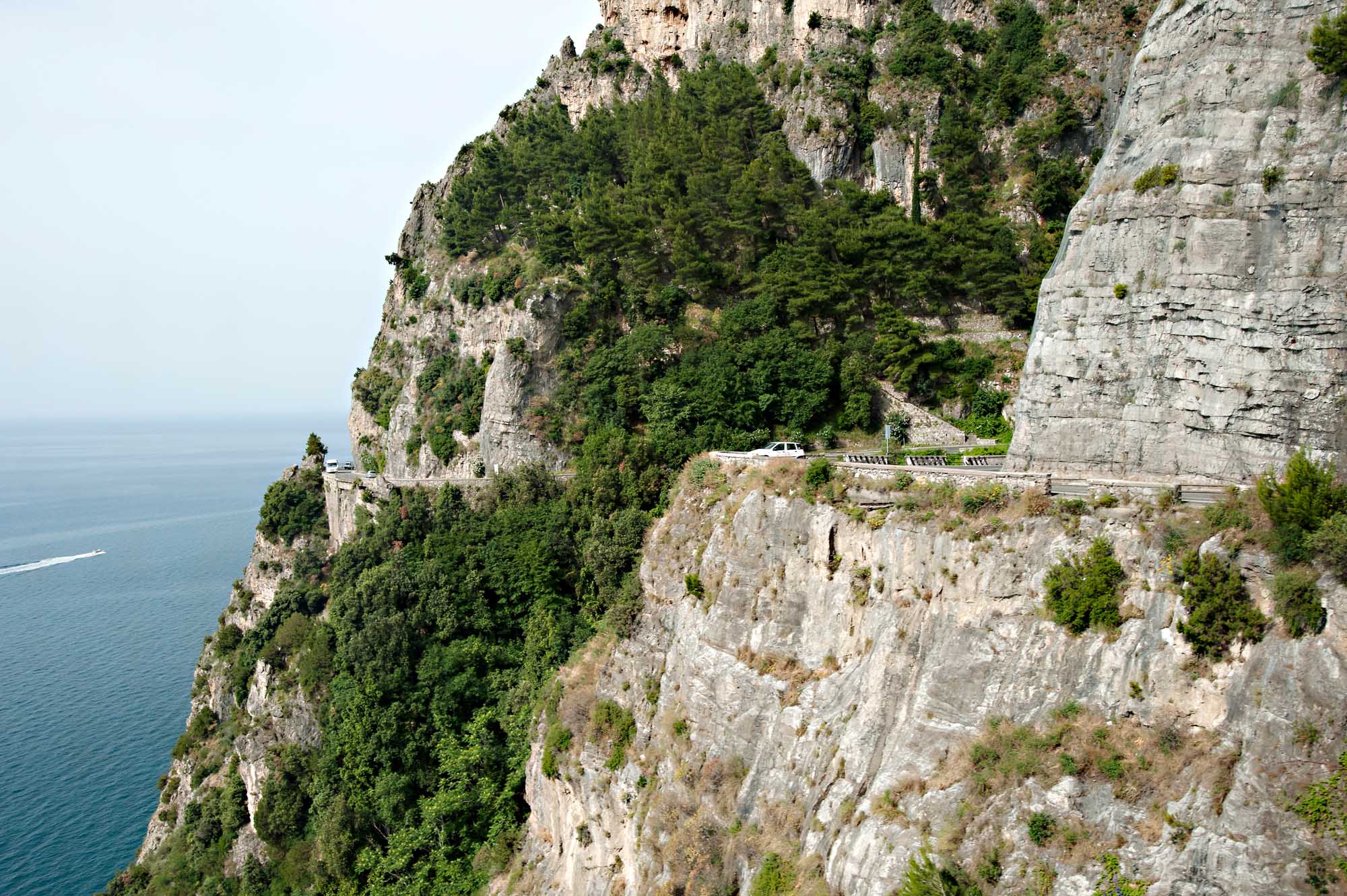 Amalfi is a tendering port. The small boats drop your right in the center of the town.

Taxis are expensive in Amalfi. As long as you want to stay in the town, you shouldn’t need one since Amalfi is very walkable. If you want to tool along the famous coastal road, with its images of carefree jet-setters in shades and scarves tooling along its famous hairpin bends, precipitous drops and heart-stopping views, you will have to rent a car.

Cars are not available in Amalfi. In Naples, you can rent a small car at the airport for about $30 a day, but you have to know how to drive a stick shift. Try Holiday Autos, Avis or Hertz. If you're uneasy taking a bus to the airport, taxis have a fixed rate of 19 euros from the port to the airport. Ferries, which run frequently, can be the best ways of getting around, especially because local roads can be clogged in the summer.

Store hours: Business hours are Monday to Saturday from 9 am to 1 pm and again from about 4 pm to 7 pm. Businesses are generally closed on Sundays.

Tipping: As in most of Europe, tipping isn’t expected in Italy. A service charge is sometimes added to the bill. Some may also add an extra charge for the dinnerware and extras (tablecloth, silverware, plates, bread, etc.) — this is normal.

Safety: Amalfi is not a dangerous city but always beware of pickpockets and purse snatchers. These are pretty common activities against tourists. It is recommended only to carry with you what you need and keep the rest locked up on the ship.

Have you been to the Amalfi Coast? Please share a story, tip or discovery. What was the highlight for you? Any photos you'd like to share?

“The Amalfi is Italy's coast with the most. Whether you ride the bus or a taxi, the trip south from Sorrento is one of the world's great road trips. ... The resort town of Positano hangs on the most spectacular stretch of the coast.”

“If you visit the Amalfi Coast and don't stay in Positano, take the once-in-a-lifetime white-knuckles bus or taxi ride to upper Positano, then walk downhill to the waterfront shops and cafes. You can ferry back to your home base viewing the lovely coastline from the water.”

“For a great day trip from Naples, Positano or Sorrento, catch the early morning jetboat to the island of Capri, which served as the vacation hideaway of Roman emperors and Romantic Age aristocrats.”