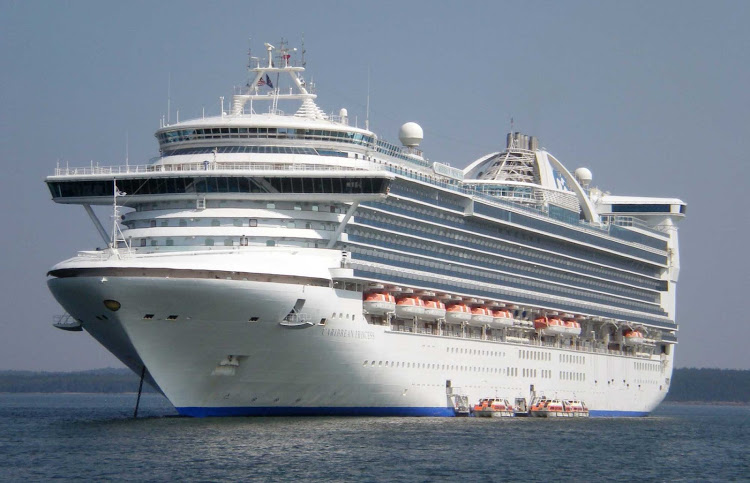 Caribbean Princess in port. We took her on a cruise to the western Caribbean.

Highlights, insider tips, and some suggestions for improvement

September 9, 2015
Editor's note:  We've chosen Bill McNicholas as our first Cruiser of the Week for his review of Caribbean Princess's sailing to the western Caribbean.

Overall impressions of the cruise & the trip

Our family enjoyed the cruise on the Caribbean Princess out of Houston for seven days in the Western Caribbean visiting Cozumel, Roatan, and Belize. The weather was clear, sunny, warm, and humid. It was totally relaxing for the most part except for the norovirus outbreak, a small one, which the ship handled quickly and under the radar. 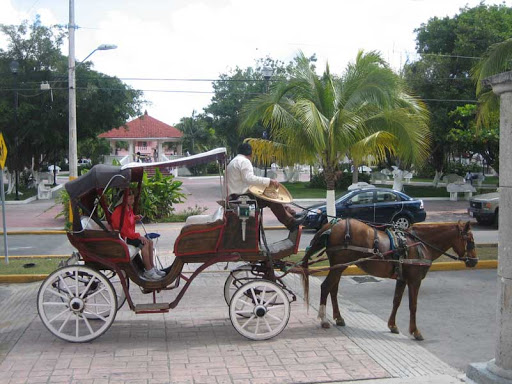 Cruising is a great getaway: You only unpack once, visit different ports, get off and tour if you'd like or just staying on board and enjoy the day and facilities. This is what we enjoy.This was our fourth cruise through the Caribbean, but it will be our last. Yes, there are different ports, but the stores become repetitive after a while, peddling the same merchandise (which we don't want or need), only with different logos.

The Crown Steak House and Sabatini’s Italian Restaurants were great in food and service, but you should know there's a $25/person surcharge for them.  The menu was very creative, the service great, and the food super.

The Lido deck theater was fun and a main attraction on the ship. We enjoyed a lot of first-run movies plus some oldies along with recorded concerts of various stars. 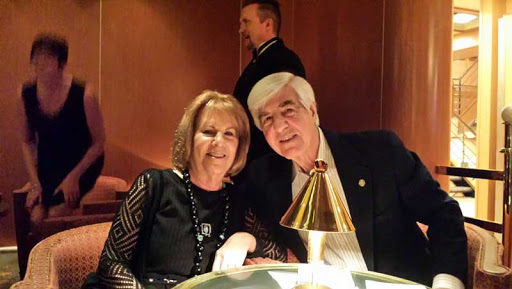 My wife and me while dining in a specialty restaurant on Caribbean Princess.

Impressions ... of the dining

Caribbean Princess has two main dining rooms, and the food went from just OK to great, depending on the menu. Lobster night was superb — it always occurs on the last formal night. Other times, the dining experience was uneven. 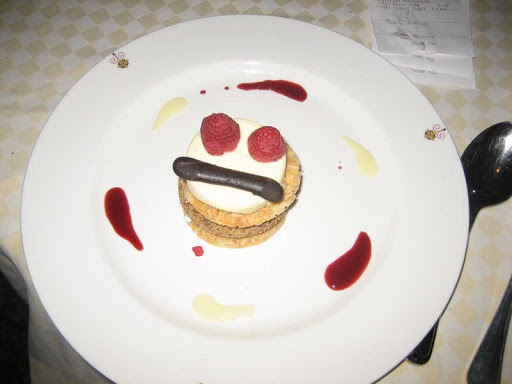 This being our second cruise on Princess, I would rate the food as not as good as the Grand Princess, which we were on a few months earlier. Service in the two main dining rooms was great aboard Caribbean Princess — much better than the service we received on the Grand. The buffet was a buffet, need I say more?, since I am not a great fan of buffets. The food was served and not self-service due to the norovirus. (Only a small percentage of the passengers came down with it, we were told.) We skipped the Caribe Restaurant Buffet, which changes is ethnic menu daily, as well as the pizza and hamburger/hot dog bars at poolside.

Impressions ... of the stateroom

The stateroom we had was a mini suite with balcony. It was totally comfortable, and we enjoyed it. The one problem is the step into/out of the bathroom. At night in the dark or in rough seas, it is an accident waiting to happen. On the Grand Princess, we had some rough weather, more elderly people, and a lot of falls and minor injuries.

Impressions … of the entertainment

The entertainment was not to our standard or what we expected. The shows were sort of hammy. "The British Invasion," which we also saw on the Grand, was just bad and not what one expected in the way of music. The comedians left a lot to be desired and the material seemed to be just rehashed.

Impressions … of the activities

The ship had continual activities for all ages, you just had to pick what you wanted to do.  At times, desired choices conflicted, since there were so many and ran from 6 am till 1 am.

Impressions … of best bets on shore

Cozumel: Take a local horse and buggy trip around town and through the community.  It's a great opportunity to see Cozumel as it is, which is quite different from the strip along the waterfront.

Roatan: The beach trip to Tabyana Beach and the reef was a fun and enjoyable experience. The beach was beautiful, lunch great, water warm and clear, lots of fish.  On the downside, the reef, though live coral, was brown and gray. 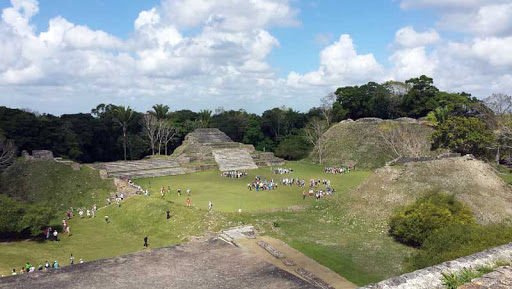 Photo by Bill McNicholasPart of the Altun Ha Mayan ruins in Belize.

Belize: Went on the Altun Ha Mayan Ruins and River Trip. The bus trip to the ruins was an hour long and we had a great guide. The ruins were awesome and the guide was great in taking the time to provide the history. The trip to lunch and the boat took another hour.  Lunch was edible but nothing special. Then we took a boat trip down the river and back.  Nature’s willingness to cooperate plays a major role, from seeing crocs, monkeys, iguanas, birds, termite nests, manatees, dolphins, and many more, including their migration patterns and time of year.

Be prepared for the norovirus on trips to the Caribbean, since there have been numerous outbreaks on various cruise ships in the past year. Carry and use plenty of hand sanitizer, wash hands frequently, and even wear latex gloves when using the railings. Be prepared to kick back, relax, enjoy, and don’t hold unrealistically high expectations, otherwise you may be disappointed. Unpack, kick back, relax, and enjoy — that's what it's all about regardless of destinations.

Who's on board? This cruise had passengers from small children to the almost centurions, with most being in the 50 to 70 age range from all walks of life. We met several first-time cruisers as well as a couple that has cruised on Princess over 800 days.

Internet connectivity is from the satellite and I believe through a wireless router on the ship. Online connectivity was much better than my experience on the Grand. Not what you have at home, but serviceable. The price was in the 50 to 80 cents/minute range, depending on how many minutes you buy. 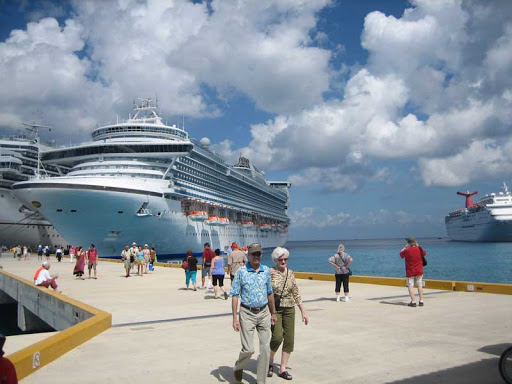 Impressions …. of room for improvement

Some things that could have been better: The embarkation and luggage handling left something to be desired, with long lines and slow delivery of luggage to staterooms. It took 60 minutes between boarding and when we arrived at our stateroom, and it took almost 4 hours for our luggage to arrive. Not like the Grand out of San Francisco, where it was under 30 minutes from when the porter grabbed your luggage and you were at your stateroom with the luggage waiting there.  Debarkation was a different story, swift and efficient: It took under 20 minutes from our checkout time to pick up our luggage, pass through Customs, and exit the terminal.

Traveling the 2.5 hours down the channel from Houston limited the ship to what alcoholic drinks it could serve, and the casino was closed until the ship cleared Texas law and reached international waters. Not a strong positive if you wanted a good drink or leave a little money at the tables, but Houston is the departure port.

The distribution of information and activities seemed to be lacking, even though most were listed in the daily newspaper. It just seemed secretive on some things and activities. (E.g. the balloons in the atrium and then disappeared late in the evening and the talent competition between the two main dining rooms was only announced at dinner, but not in the daily news. Understandable on the norovirus since the ship did not want to create a scare. 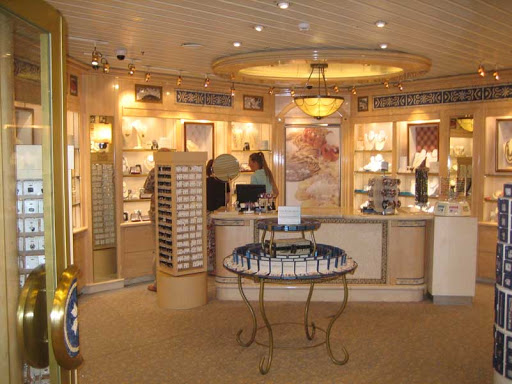 Our 7-day cruise on Caribbean Princess in the mini-suite came to about $1,100/person. The itinerary was depart Houston at 5 pm Saturday, Sunday was formal night, Monday in Cozumel, Tuesday in Roatan, Wednesday in Belize, Thursday (formal night) and Friday were sea days, and on Saturday we disembarked starting at 8 am.

My wife and I were fortunate to have our youngest son and his wife from Austin cruising with us on this totally enjoyable and fun experience.