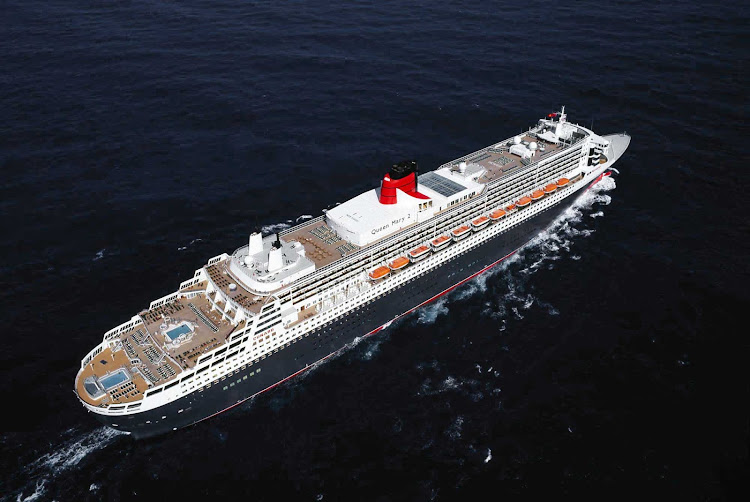 An aerial view of Queen Mary 2. Go ballroom dancing, meet new acquaintances at one of her several bars and lounges, take in a theater production or dine at a first-class restaurant.

What's it like to go on a transatlantic cruise? I've been on a few now and no two are alike. So let me tell you about my crossing aboard the regal Queen Mary 2, a memorable autumn voyage. (Here's my review of the ship!)

Queen Mary 2 isn't the only ship that does transatlantic crossings, of course. Besides sister ships Queen Elizabeth and Queen Victoria, you'll find ships doing world cruises and others doing repositioning cruises each spring and fall. All of these offer experiences that are quite different from typical cruise itineraries.

Ralph Waldo Emerson once said, “Life is a journey, not a destination,” and for ships making a transatlantic crossing, that's apt indeed. This sailing was all about the things we could do and see during seven days on one of the world's last remaining dedicated ocean liners. 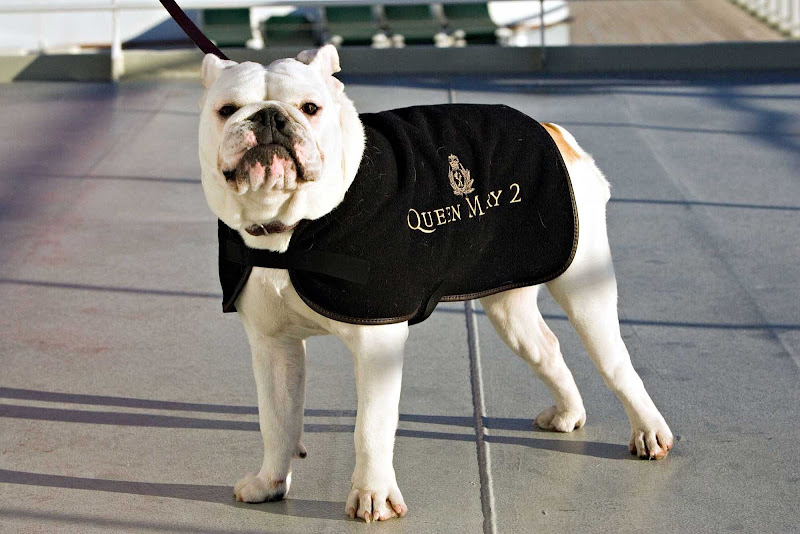 Courtesy of Cunard LineCan't cruise without your pooch? Queen Mary 2 offers dog owners a kennel program in which your dog is walked and looked after — even if your pet isn't a Winston Churchill lookalike.

Preparing for our voyage

A transatlantic cruise begins with a simple decision: Do you depart from the States and fly back from Europe (often England), or do you embark from across the pond?

For us, we began with an overnight at the Marriott at the Brooklyn Bridge, a superb pre-cruise hotel just a short distance from the Brooklyn port where Queen Mary 2 docks. Still, it took us over an hour to drive to the port because of regular traffic and passengers en route to the ship. Embarkation took another two hours — there were well over 2,500 passengers climbing aboard.

Soon, though, we were settled in our Britannia Club Balcony suite and, after the mandatory lifeboat drill was over, we were ready to roll. But not so fast. First came an announcement by Capt. Chris Wells that the sailing would be delayed. “This time it’s because of our four-legged passengers,” he quipped. Queen Mary 2 boasts the only shipboard kennel and due to some red tape the 12 canine passengers that were booked on the cruise were denied boarding until their papers were in order. This delayed us by about three hours and, alas, it was too dark by then to enjoy the view, although the Statue of Liberty was very visible. Then we sailed smoothly into the night. For Richard, my first mate, the voyage had extra meaning because it retraced his father’s footsteps. “He did it decades ago on a business trip to England aboard the Queen Mary, QM2’s successor, when I was little and my mother, brother and I saw him off in New York City on his way to England,” he told me. “I was too young then to register much besides general awe. The exception was the roominess of his suite and, more particularly, the bathroom and its large bathtub fitted with multiple taps. I remember asking someone why there were so many taps. I never forgot the answer: Some of them were for salt water.“

I’m not certain why sending salt water to passenger bathtubs was important then, but I can vouch that there were no salt water taps in the Britannia Club stateroom we occupied during our New York to Southampton crossing. In fact, there wasn't a bathtub. 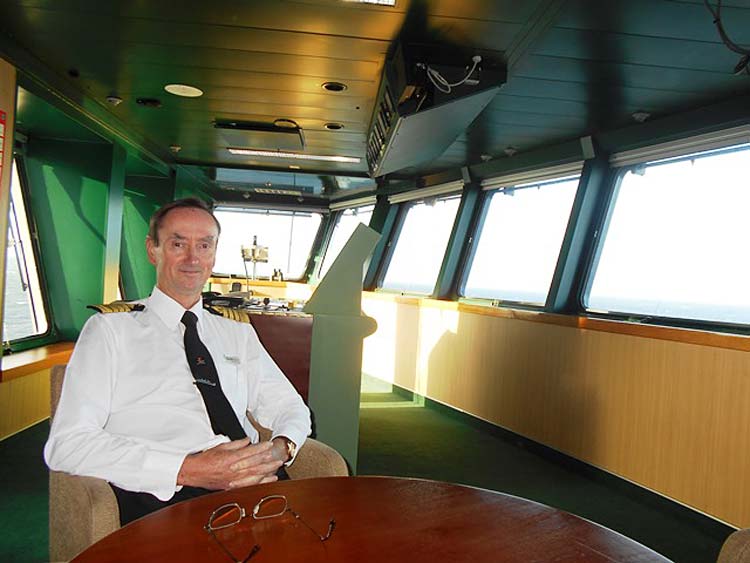 Patti Pietschmann / Special to CruiseableCapt. Christopher Wells on the bridge of Queen Mary 2.

Christopher Wells, the ship's genial captain, soothed our initial loss of time the next day by telling us we would now be “leaping ahead” by an hour, as if it were a parlor game. Today, with jet aircraft flying overhead, leisure time aboard QM2 is the name of the game. “With speed no longer the essence, we like to travel the elegant way,” he told us.

What hasn’t changed, however, is the weather on the traditional circle route taken by QM2 for the shortest distance between North America and the United Kingdom. Even in late October, hardly the peak of foul weather in the North Atlantic, there were two days of rough seas and high winds that closed some outside decks and made negotiating stairways (as well as sleep) something of an adventure. Long swells with steep sides and Force 8 winds caused the ship to roll, pitch and shudder when the hull slapped down.

Through it all, the ship’s crew and the daily program advised passengers to expect “fair with some swell” conditions. Yes, stay calm and carry on. Nothing like that British pluck. 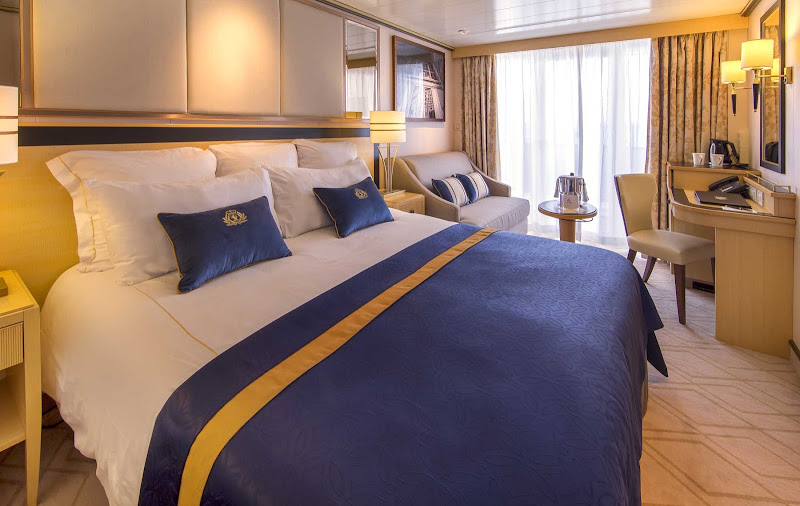 Courtesy of Cunard LineA Balcony Stateroom, category BC, on Queen Mary 2, similar to the one we stayed in.

Three classes of staterooms on QM2

As I described in my ship review, the otherwise outdated English class system survives on QM2. Queens and Princess Grill passengers in true suites have their own serene dining rooms, bar lounges and other amenities that are strictly off-limits to the masses. The rest of us stay in Britannia staterooms, which get you dining privileges in the Britannia Restaurant, the Kings Court buffet, an alternative restaurant or order from room service (free, surprisingly good and available around the clock).

We stayed in one of 30 Britannia Club Balcony rooms (ours was room No. 12077), which come with privileges such as bottles of water (which would have cost $3.95 a pop otherwise), full in-room meals even from the dining room menu, robes, slippers, Wi-Fi that worked quite well (for a fee), a vanity/desk, small bath with shower stocked with decent shampoo, conditioner, moisturizer and body wash, ample storage, hair dryer and that dedicated dining space we so enjoyed. 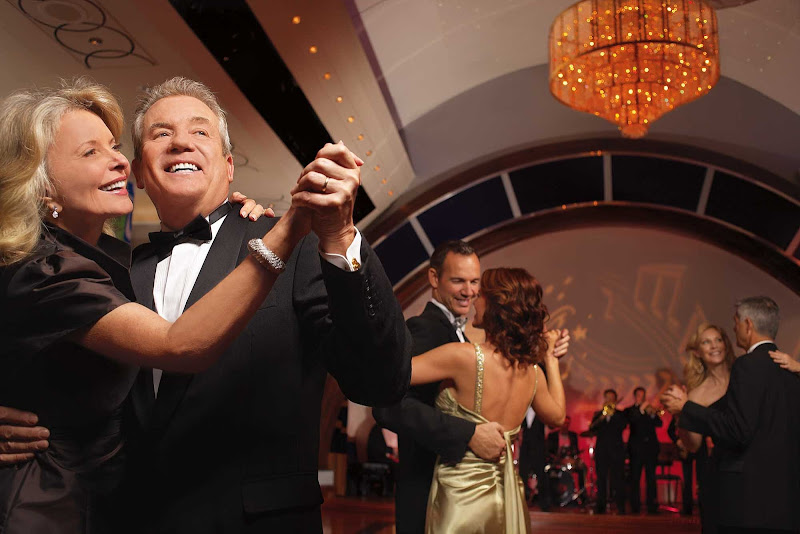 Courtesy of Cunard LineVisit the elegant Queen's Room for Afternoon Tea or to go ballroom dancing to a live orchestra.

Apart from staterooms and restaurants, the classes do mingle in common areas, such as entertainment venues, and for lectures and other activities. This is where Queen Mary 2 shined. One might think that a solid week at sea with no port stops might tend to monotony and boredom. Not true on this trip. Sometimes, there was barely time to finish a meal or dress before rushing off to a must-do activity or performance.

That was especially so on this Blue Note Jazz at Sea theme voyage. Jazz greats and Grammy-winners Gregory Porter and Dee Dee Bridgewater both performed more than once, and a highlight was the impromptu informal performance by Bridgewater’s dynamic quartet, which was eventually joined by the scat diva herself. 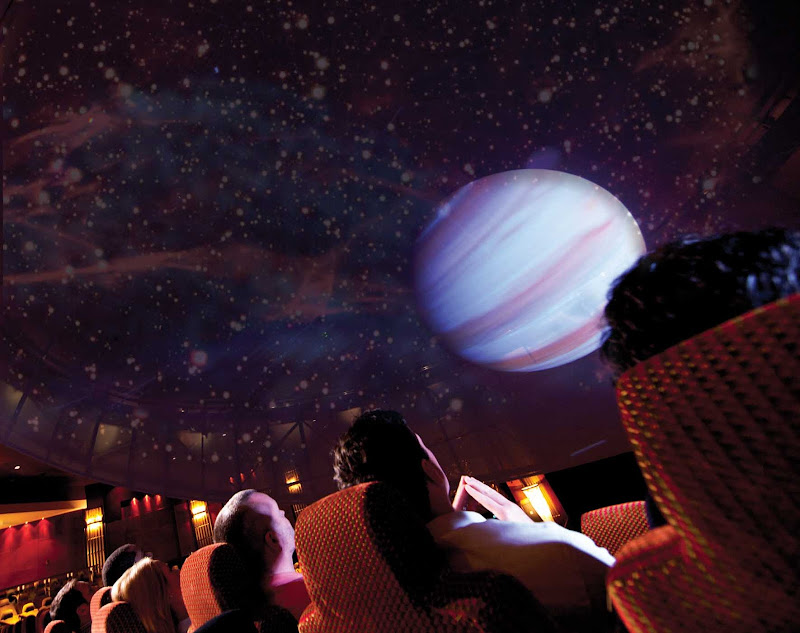 Courtesy of Cunard LineSit back with your family members and gaze at the stars and planets on an exhilarating virtual ride into outer space at Queen Mary 2's full-scale Planetarium.

What we liked best

Here's what we liked best about the ship and our transatlantic crossing.

Seven days at sea to contemplate and relax. Few guests (including us) spent much time at all on the Internet. This was a getaway in the truest sense.

The amazing Planetarium — the only one of its kind at sea — runs several celestial shows that explore the universe, projected on the ceiling with voiceover by Tom Hanks, Meryl Streep, Robert Redford and other stars.

The pleasant indoor pool. while there were few swimmers, it did attract a crowd of chaise loungers. There’s also a bar.

Abundance of onboard activities. There’s everything from fencing to offerings such as poetry, lectures, line dancing, shows, sports, movies, games, wine tasting ($45 a person), spa seminars, Champagne afternoon tea ($30 a person) and more.

The ample deck space, which allowed daily walks around the jogging deck, though it was just too cold during our mid-autumn cruise to spend much time outdoors. 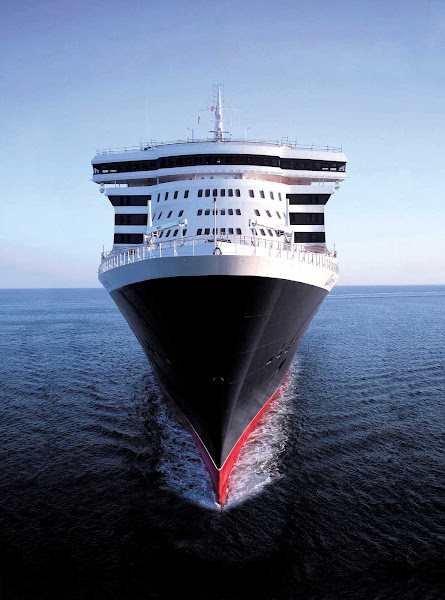 Courtesy of Cunard LineQueen Mary 2 features 17 decks and towers 200 feet above water, a height that is equal to a 23-story building.

The spectacular Royal Showroom with mostly unobstructed views from all of the comfy seats and fantastic sound.

The Bamboo Restaurant ($35 for two, not including wine) features a delicious assortment of Asian appetizers attractively presented in a Bento Box, a choice of entrees that included an exceptional cod and chili beef and a trio of desserts.

Kings Court offered lunch, snack and dinner buffet selections, nicely presented and tasty, from pizzas to sushi and beyond.

A dozen bars to choose from — we tried them all!

The witty, elegant Capt. Chris Wells — a veteran seafarer who was on the build team of the QM2 back in 2002 — comes on the PA system every day at noon packed with info, family tidbits and fun stuff. Wells has worked for Cunard and its corporate owner, Carnival, for 25 years with stints on Princess, P&O, Queen Victoria and Queen Elizabeth. He lives in Southampton and spends two months on the ship and two months off. As the ship sailed through the area where the Titanic sunk, he went into detail about the event, and added anecdotes about other areas of the Atlantic and seafaring.

There are always a couple of things that may not be a fit for everyone, such as:

I’m not sure what Richard’s father found aboard the QM2’s successor, but it couldn’t have been grander than our own crossing of the Atlantic. Having been on more than 300 cruises, I can tell you that while some of them may blur together, there's something memorable and unique about every transatlantic crossing.

How about you? Have you been on a transatlantic cruise? What was it like?