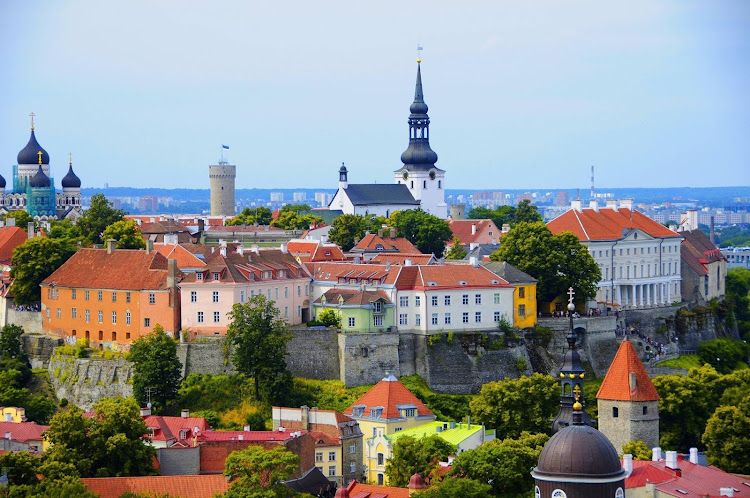 How to spend a perfect day in Tallinn, Estonia

Our first trip to the Baltics was an absolute success. With several days to explore Estonia — more than you'll likely get during a cruise visit — we took the time to uncover the beauty of Tallinn, the country’s capital city. It’s tempting to just stroll the streets of town and take in the picture-perfect facades, but there’s a great deal of history tucked into this tiny capital, and a number of sights and establishments that help you delve a bit deeper to uncover the city’s secret gems. 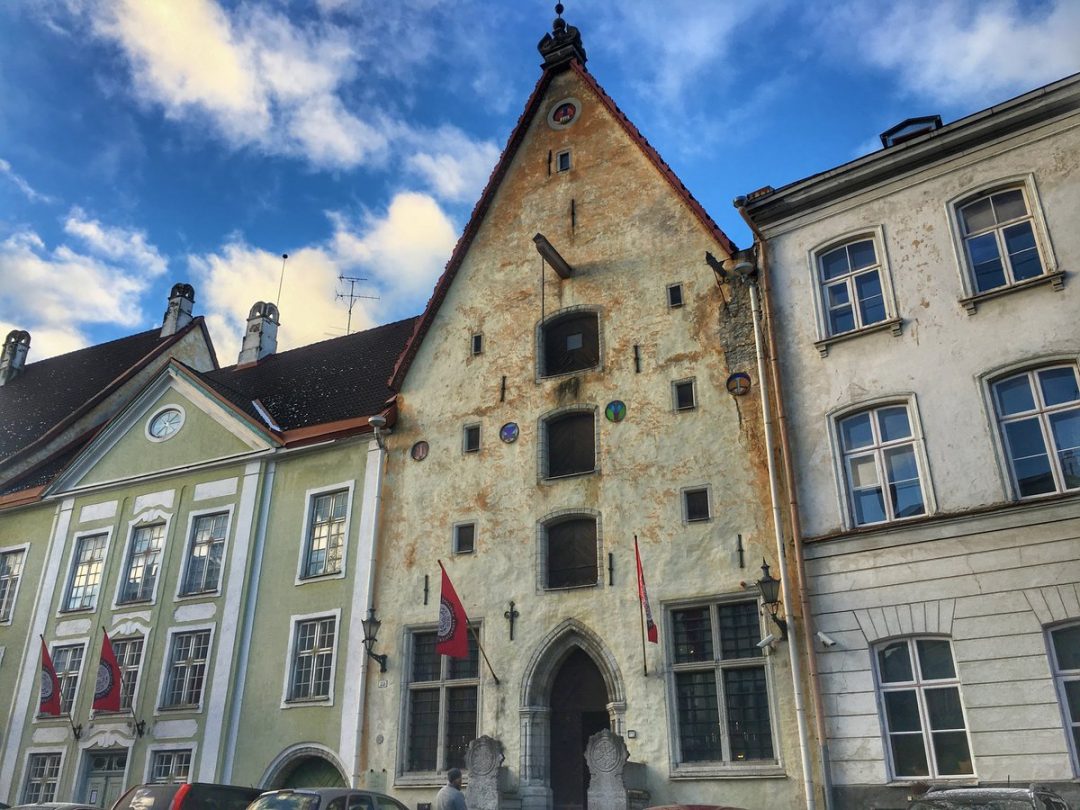 Armed with the 24 Hour Tallinn Card, we aimed to take in the major historic sites of Tallinn in a day. The map that the tourist board will give you provides enough inspiration to keep you busy for days on end. With one day in Tallinn to explore, you’ll want to prioritize, especially if you visit during the winter like we did where days are exceptionally short. First order of business? Set out early so you can maximize your day!

For a primer on Estonian history, the Great Guild Hall is a must. The museum showcases 11,000 years of Estonian history highlighting the evolution of Estonia through recent occupations. Entry is typically €6 (about $7 US) per person, but it's free with your Tallinn Card. Allot at least an hour, though you could easily spend more exploring the interactive space. For those traveling with children, there are plenty of opportunities for them to learn about the region’s history by engaging with some of the child-friendly games and activities on site. When we were there, we saw kids dressed up with swords and capes on an educational scavenger hunt. 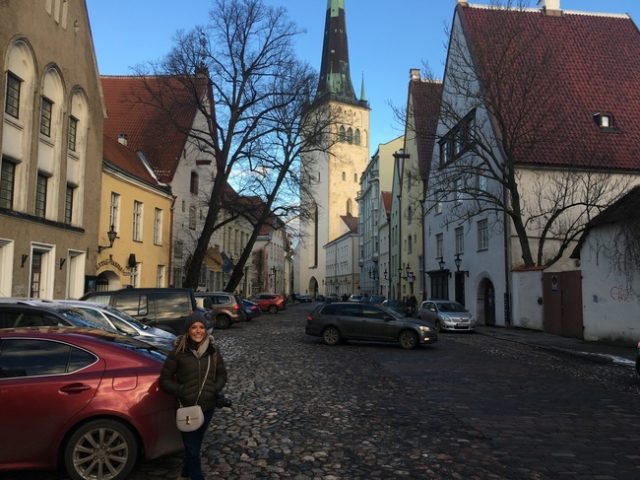 Tallinn is separated into an Upper Old Town and a Lower Old Town (reminiscent of our winter getaway to Quebec City). Historically, the lower town was the commercial area, with a marketplace, community sauna, etc. The upper town was a place for the elite; the dwelling place for those in power. That historical dichotomy still holds true today in some ways, with the lower old town providing more of the tourist offerings in terms of restaurants and accommodations, and the upper town housing parliamentary buildings and embassies.

Until we began focusing on our day in Tallinn by using our Tallinn Cards, we had neglected the upper part of town, which was a sin on our part. I had for some reason (no idea why) assumed that the upper town would be less charming or have less to offer. That’s absolutely not true at all. In fact, some of my favorite moments were from the upper town!

To get there, you’ll either walk a series of stairs or walk up a hill through a passageway that connects the two areas on foot. Use the Russian Orthodox church as your guiding light. Our first mission was actually to visit St. Olaf’s, one of Tallinn’s most famous churches, but it was closed during winter. No matter though, the street that it’s situated on is charming beyond belief, with captivating medieval architecture that will make you extremely snap happy. 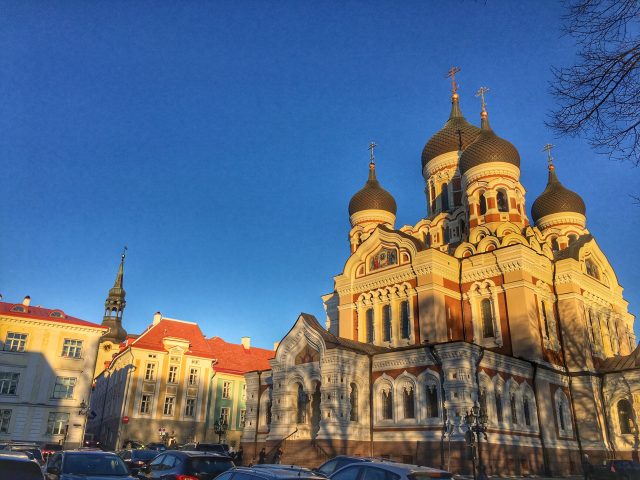 There’s a large Russian influence in Estonia, which was historically done by design during the Soviet occupation. At least a quarter of those living in Estonia are ethnic Russians and that influence is still felt in part throughout the city. The Russian Orthodox church, an impressive anchor in the middle of the upper old town streets, dominates the landscape at the top. My travels have never taken me to Russia or to any place with any significant Russian influence so I was captivated by seeing this beauty in the skyline. Inside it’s equally beautiful and anyone can enter free of charge, no Tallinn Card required.

Across the street is the Estonian Parliament building, a cotton candy pink hue that adds a regal element to the area. Once you’ve reached this area, you’re really in the thick of some major sites and stunning vista points so give yourself time to wander. 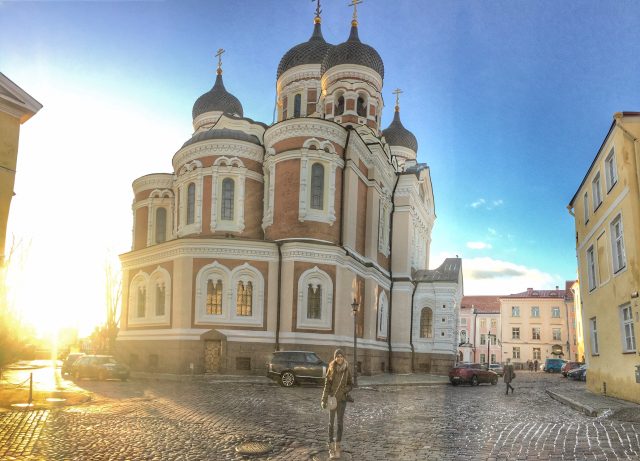 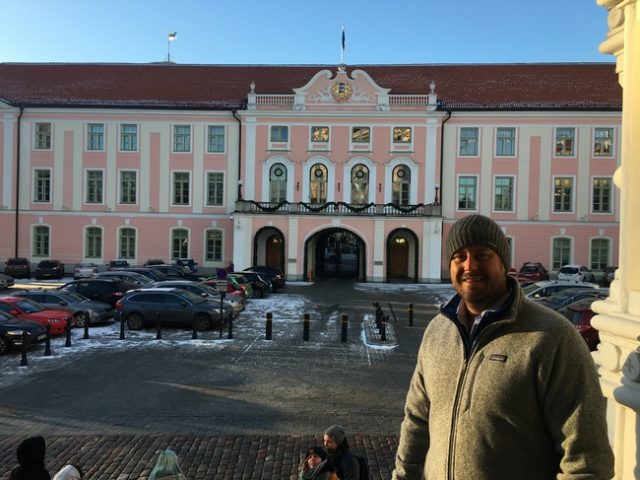 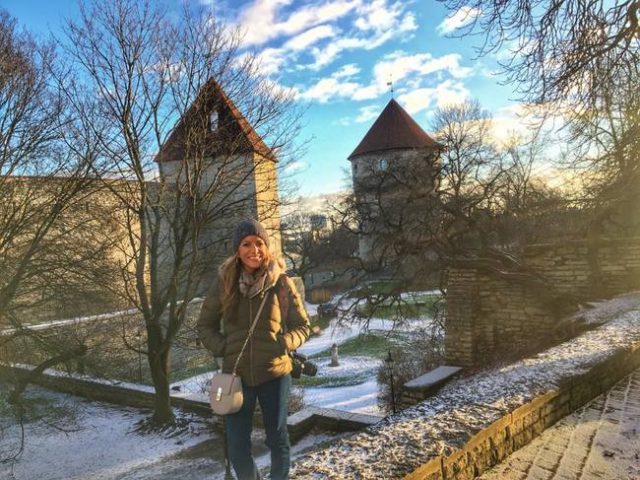 The Parliament building faces the Russian Orthodox church on one side, and a quick walk around brings you beautiful views of the Old Town walls, the perfect place for a gorgeous photo op. Kiek in de Kök is nearby for those wanting a museum fix and to visit the hidden tunnels that run through. Kiek in de Kok literally translates into ‘‘peek into the kitchen,’’ a reference to the tower’s height, which allowed guards unsurpassed views, practically into everyone’s homes.

Let’s talk about my one of the most beautiful views over Tallinn: the vistas from the Cathedral of St. Mary the Virgin Tower. The Tallinn Card will grant you entry to the church and tower, where you’ll have incredible views of the orthodox church and city below. If you have one day in Tallinn, don’t miss out on scoping out some beautiful views – there’s something truly spectacular about seeing the city from above. The church itself is fascinating, too; different from traditional churches with unique wooden artwork gracing the walls and a slightly darker medieval twist. 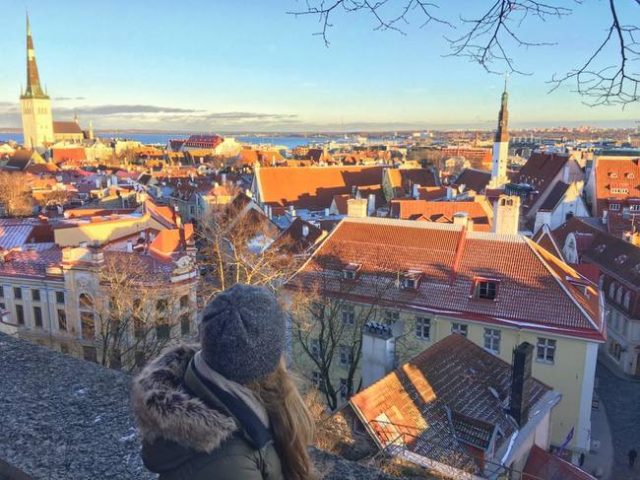 If views are your thing and you’re still on the hunt for viewing platforms, the upper town has you covered. The Tallinn Card map will point out two spots where you can enjoy incredible views of the city below with wide expanses below. Both platforms are gorgeous and offer different angles over the town below. Neither was particularly crowded but you’ll want to head to the platform edge of both viewing areas to take in the scenery – don’t be afraid to ask a fellow tourist for a snapshot, you’ll see plenty of people situating their selfie sticks for a primo snapshot. 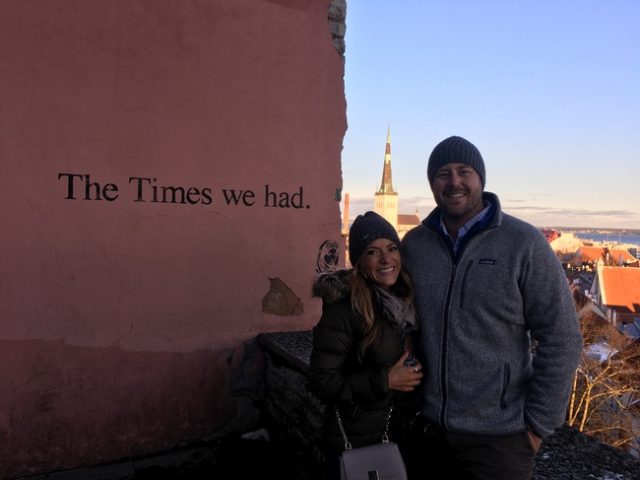 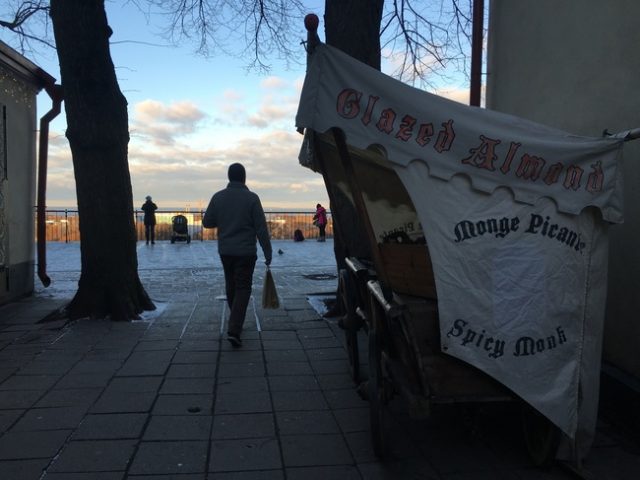 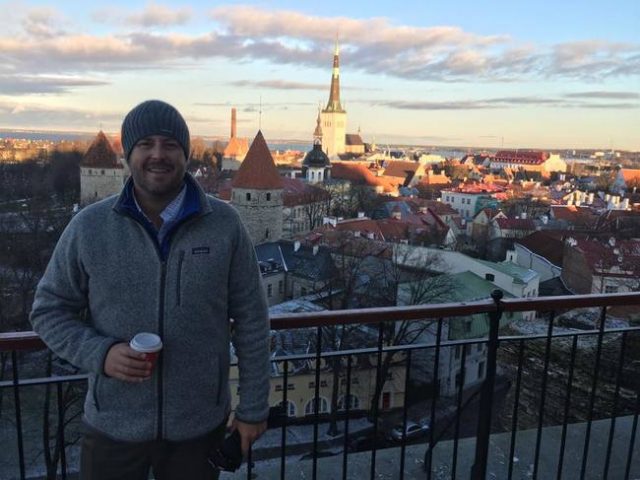 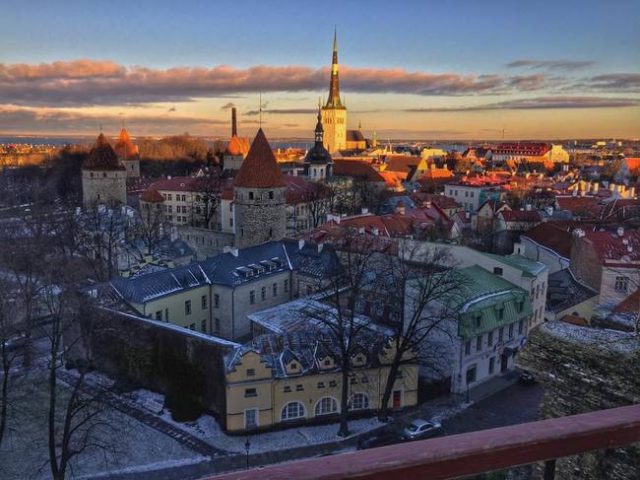 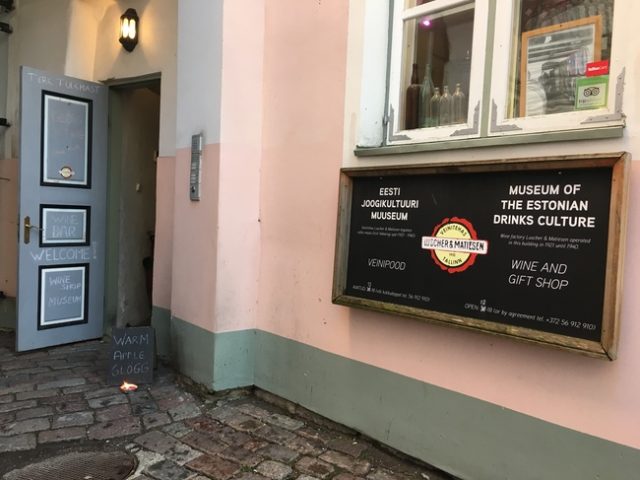 This was one of the museums that I was particularly intrigued by, and we were too close to pass it up! The Museum of Estonian Drink Culture is part museum and part tasting room, and it’s a great little stop for a cup of mulled wine and a lesson on the evolution of Estonian spirits. Historically the Luscher & Matiesen distillery, the museum now occupies that space to lend an authentic and historic quality.

We stopped in to take a peek and grab a hot cup of wine but stayed to talk to the proprietor, who brought serious passion to educating visitors on Estonian liquor production. Estonia was once a huge producer of vodka (about 90 percent of their potatoes were used for vodka production), plus locals produced their version of Cognac and other spirits. Their foray into wine production brings a unique twist on traditional viticulture, focusing on using berries vs. grapes in many instances. 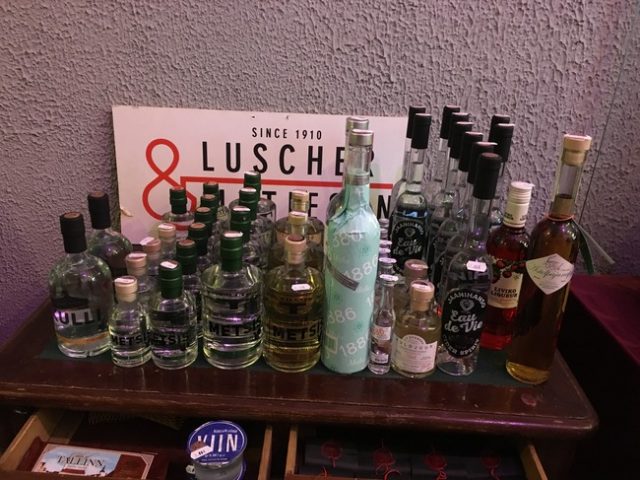 We tasted locally produced gins and their schnapps before purchasing one of each. If you’re in the market for spirits to take home as your souvenir, this is the perfect place to stop for a taste, some insight and a perfect gift for your cocktail lover at home. 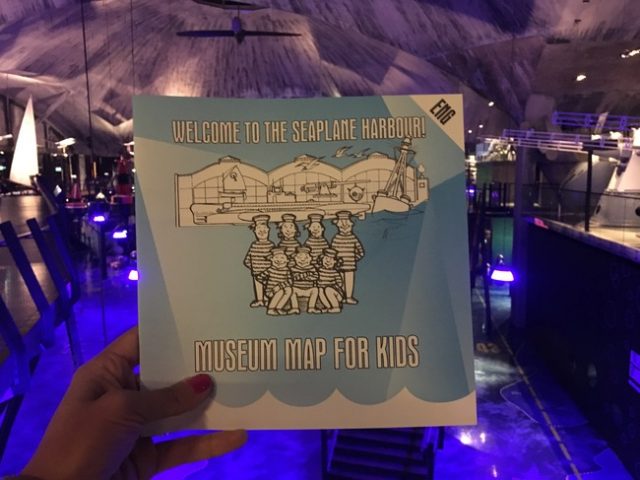 The Maritime Museum is one of Tallinn’s premier spots when it comes to sightseeing and we weren’t going to pass it up. We strategically planned our day so that we visited the museum after the sun had set – there’s no need to use precious daylight hours there since it’s all inside. The museum is exceptionally well done and very family friendly with loads of elements dedicated to kids’ education.

Plan on an hour there but those particularly interested in maritime history may want to spend more time exploring. There’s a virtual reality headset, a submarine (Lembit) that you can explore, a search & rescue helicopter inside, plus lots of interesting pieces focused on Estonia’s seafaring history.

Other places we visited using the Tallinn Card: Maiasmokk, Tallinn’s oldest café (we visited on our food tour in Tallinn) and the Church of the Holy Spirit, just down the street from our home base at Hotel Schlossle.

Hop On Hop Off bus tours

While we didn’t take advantage of this fully, the Tallinn Card also grants you access to public transport plus the Hop On Hop Off bus tour. During the winter months, the HOHO tour only goes three times per day (10 am, noon and 2 pm) so you’ll have to plan accordingly if you want to do that loop. There are many sights you’ll be able to see on foot in the Old Town but further afield you’ll find the Song Festival Grounds plus the TV Tower, both of which are of historical significance.

Visiting by cruise ship? The Tallinn Card is the perfect way to get in all of your key sites in a single day

For those heading to Estonia for the first time, check out The Singing Revolution, a documentary that details Estonia’s history, Soviet and German occupation, and their journey to freedom through their singing revolution where one million voices sang their way to independence (it’s true, and it will help you understand why song and music is such an integral part of Estonian culture).

For those who are visiting off of cruise ships or on day trips from Helsinki, the Tallinn Card is the perfect way to get in all of your key sites in a single day. If you’re like us, it may encourage you to see places that you wouldn’t have normally prioritized as well, which is always a fun way to uncover unexpected gems. In a week that we spent in Tallinn, we still left plenty to see on a future visit. The tiny city packs a big punch in terms of history, and has more museums and theatres than you’d imagine for a destination of its size. No doubt, a successful day in Tallinn.

Check out this quickie minute-long clip of our day in Tallinn:

Have you been to Tallinn? What would you see in a day in Estonia’s capital?

Republished from The Wanderlust Effect.