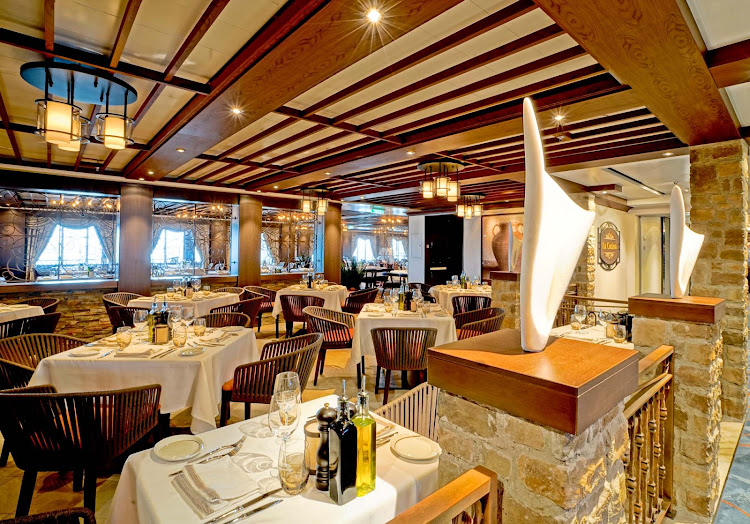 Dine in opulence at La Cucina on board Norwegian Escape.

Our 7 favorite meals on Norwegian Escape

I’ll be the first to admit it. One of the big reasons I love to cruise is the food. Maybe you're one, too — there’s nothing wrong with admitting you’re a cruise foodie. 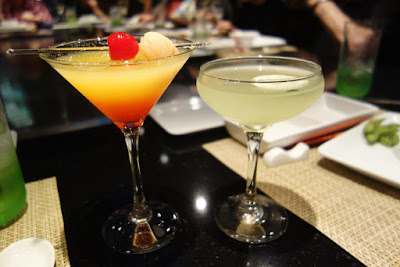 While we’ve sailed many times on ships with a great selection of restaurants and onboard dining, nothing could quite prepare us for our recent cruise on Norwegian Escape, the biggest and newest ship from Norwegian Cruise Line. This megaship boasts over two dozen dining options. You can choose from three main dining rooms and multiple casual dining spots as well as specialty dining venues featuring food from all over the globe.

So, on this cruise we ate, and then ate some more, trying to get to as many venues as possible in the interests of travel journalism. Narrowing down our favorite dining experiences was tough, but in the end, we were able to come up with this list of 7 favorite meals on Norwegian Escape. 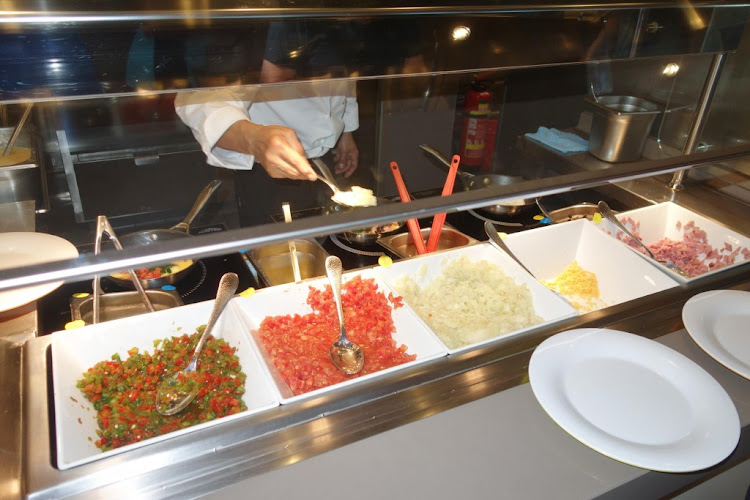 You don’t usually think of the buffet as having some of the best food on a ship, but don’t let the breakfast at Ocean Café fool you. Their made-to-order omelet station offers one of the freshest breakfast you can find on the ship. Watch the chef crack open your eggs and choose from a selection of vegetables, meats and cheeses to add to your custom-made omelet. These omelets are light, flavorful and a great way to start your day without being overcooked or greasy. Best part? If one omelet doesn't satisfy, you're just a few steps away from other great offerings including hot and cold breakfast selections. 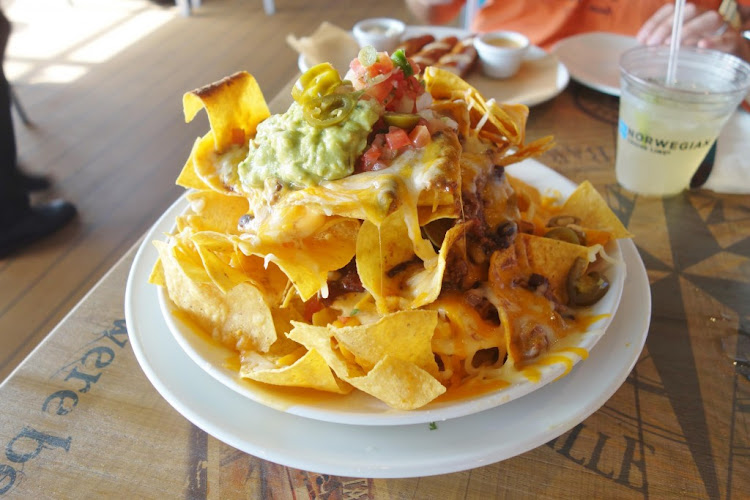 On occasion you'll walk into a restaurant and notice that virtually every table appears to have the same plate of food. This is what we encountered at the first Margaritaville at Sea. While known for its Cheeseburgers in Paradise on land, the must-eat menu item on Norwegian Escape is the Volcano Nachos. Crispy tortilla chips piled high with queso cheese, pico de gallo, jalapeños, guacamole and sour cream, it's a proverbial mountain of food. Share an order with friends as you enjoy a few signature margaritas and boat drinks in this open-air specialty restaurant. 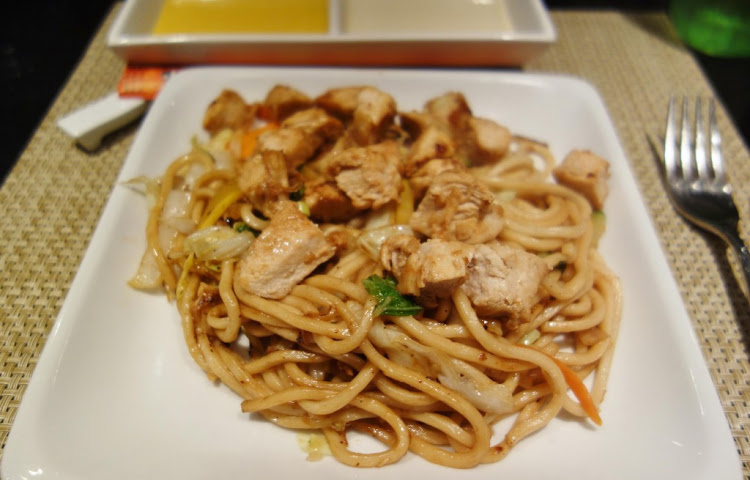 Somehow your food seems to taste a little bit better when it's prepared in front of you. And while the Japanese steakhouse Teppanyaki on Norwegian Escape offers a great variety of steak and seafood, the chicken yaki udon was a clear standout. Made with the traditional cooking sauces and tossed with crisp udon noodles, the perfectly seasoned entrée paired ideally with the soup, salad and fried rice courses that preceded it. I had to snag a couple of forkfuls from my wife’s plate even though I had my own plate full of hibachi steak. 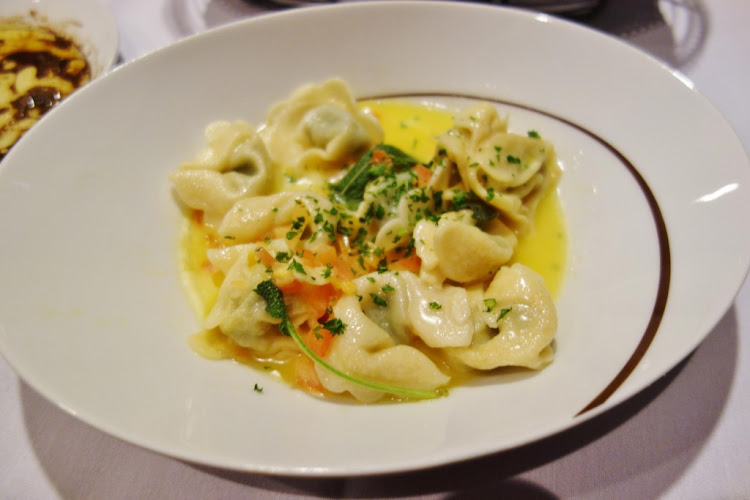 Don Bucolo / Special to CruiseableTortelloni in a sage and butter sauce at La Cucina.

Chances are that you've had mixed experiences when it comes to Italian dining on a cruise ship. However, at La Cucina on Norwegian Escape I'm pleased to report that the chef has does an admiral job with some classic pasta dishes. My linguine cioppino came stocked with clams, mussels, shrimp,and fish in a light, sweet tomato sauce that was worthy of bread dunking. The wife’s tortelloni came coated in a rich sage and butter sauce that was not overly heavy. Adding these dishes as our fifth course of the evening was well worth the extra calories. Now, where's that gym?

One of the hidden gems on Norwegian Escape is the Food Republic. The brainchild of the Pubbelly Boys from the Miami food scene, this fusion restaurant offers some of the best cuisine on the ship. Of the 11 items we sampled at the restaurant (yes, we are gluttons), many were superb. The teriyaki chicken skewers came lightly breaded and pan fried, glazed with a sweet-and-sour ginger sauce worthy of serving as a condiment to the other meals. We followed the waiter's recommendation and also ordered the beef anticuchos, one of the venue's most popular dishes; it was a great mashup of Latin flavors spread on medium-seared beef skewers. Luckily, we did not have to choose one or the other. 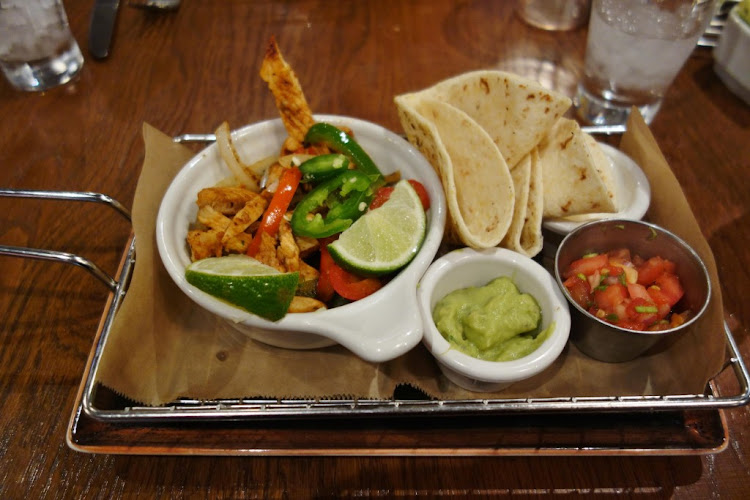 Even if you try to behave perfectly on a cruise, there's bound to be at least one late night when, after enjoying a Broadway show or dancing at the Glow Party, you're going to need a late night snack. Luckily, the 24-hour O’Sheehan’s offers some of the best “late night snacks” of any contemporary cruise ship. Yes, eating fried chicken wings dressed in a tangy buffalo sauce or munching on grilled chicken fajitas is probably not the healthiest thing to do at 1 am. But it just tastes and feels so right. You can worry about the consequences later that day after the sun rises. 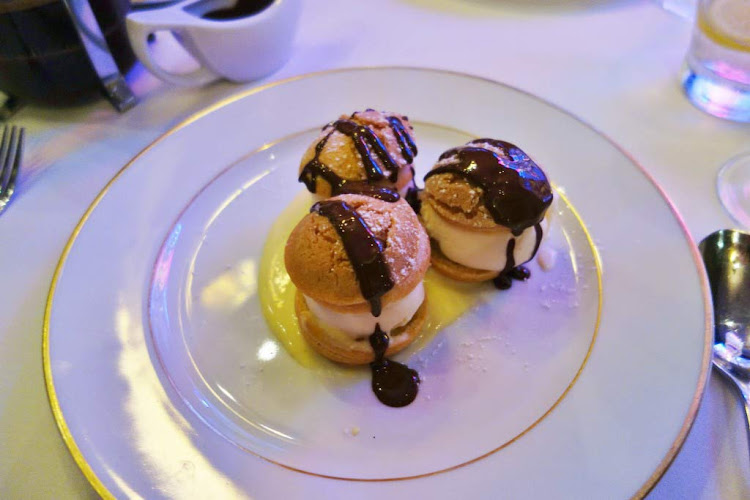 Sometimes the best part of the meal is the dessert. Who are we kidding? Often the best part of the meal is dessert. The traditional French eatery Le Bistro offers our hands-down favorite dessert of the entire cruise. These profiteroles (pro-FIT-er-awls) consist of a scoop of fresh vanilla ice cream sandwiched between two layers of light, airy choux pastry dough. Topped off with a hefty drizzle of chocolate sauce, each bite is the perfect combination of sweetness. Three's a crowd, so sharing this dessert with others is a possibility, although you may want these all to yourself.

What are your favorite cruise foods? Which cruise ship do you think has the best food? Share your cruise foodie memories with us below.