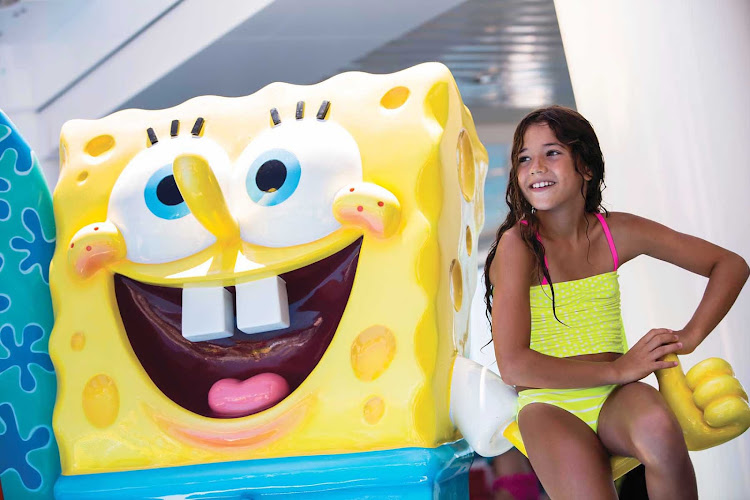 A girl poses for a photo with SpongeBob in the Aqua Park pool aboard Norwegian Breakaway.

Norwegian enables you to cruise with your kids from Miami, New York, Boston, Tampa, New Orleans, Los Angeles, Seattle, Honolulu, Vancouver, Quebec, Barcelona, Copenhagen, Rome (Civitavecchia) or Venice. The line is famous for “Freestyle” Cruising, which means you eat when and where you want. The line’s newest Breakaway class ships even have an outdoor Waterfront promenade with outdoor cafes for the most popular eateries; just be prepared to pay extra to sample some of the specialty restaurants.

What’s new:  The line’s newest ship is the Norwegian Getaway, a 1,062-foot ocean liner featuring an Aqua Park with 5 water slides and three-story sports complex that includes the largest ropes course at sea, bungee trampoline, basketball court, rock climbing wall and more. Norwegian Escape – the third Breakaway class ship — will begin weekly 7-day cruises from Miami to the Eastern Caribbean in November. In addition to the The Haven luxury cabins, Studios for solo travelers; and multi-generational group cabin configurations, the company promises more innovation, like a three-story ropes course and an even larger aquapark, the biggest one yet for the family-welcoming cruise line.

For babies: New to Norwegian is a dedicated nursery area for parents and children, ages 6 months to 2 years. Splash Academy also offers sensory play classes for toddlers under three and their parents including baby art featuring “Wee Can Too” organic art products.

For kids: Activities for kids ages 3 and up might range from pizza making to treasure hunts. Each Norwegian cruise features live Nickelodeon-themed interactive shows, including SlimeTime LIVE! or other game shows; breakfast with Nickelodeon characters; Nick-themed dance parties and meet and greets with popular characters like Dora the Explorer and SpongeBob SquarePants. Kids can also perform in the “Big Top at Sea” show with the new juggling, spinning, and tumbling skills they’ll learn at circus school.

For teens: Entourage is Norwegian’s exclusive teen zone for ages 13 through 17. Teens can choose from 20 sports like Ultimate Frisbee, hang out with new friends at pool parties and other themed events, or chill in the lounge equipped with flat-screen TVs, Wii consoles, and a video jukebox.

Around the ship: Look for onboard bowling alleys and basketball courts, pub crawls and wine tastings for the over-21 crowd, Behind the Scenes tours, and live entertainment. Group sitting services are available nightly and on port days for a small fee ($6/hour for first child, $4/hour for second).