Art and culture have a long tradition in Austria's capital and largest city, Vienna, including theater, opera, classical music and fine arts. River cruises along the Danube often take passengers to Vienna to explore the city's imperial architecture and gracious culture.

If it's Christmas spirit you're looking for, visit Vienna from mid-November to Christmas when the city's prettiest squares transform into magical holiday markets. The aroma of Christmas bakery items and hot punch fill the air as more than 20 official Advent Markets celebrate the season.

Year round on a guided sightseeing tour, you'll see the lavish Hofburg Palace, the impressive Vienna Opera House, the majestic Ringstrasse and the awe-inspiring St. Stephen's Cathedral. You may also choose to stroll along Kärntnerstrasse in the afternoon or sample Vienna's famous pastries. At night, you can explore the vibrant Austrian capital on your own, go to a Mozart and Strauss concert or eat a Krainer sausage off one of the carts on the street. No matter what you choose, be sure to savor each classic sights and sounds.

The following river cruise lines have ships that call on Vienna:

Top things to do & see in Vienna

Those in the know suggest checking whether your venue is air conditioned. Economical “standing room” tickets (roughly $3) become available before most concerts. If you tire of standing, it’s acceptable to leave before the end. Johann Strauss, “the king of waltz” symbolizes Viennese music, a gentle dance in waltz’s ¾ time. Strauss is always featured in the worldwide broadcast of the Vienna Philharmonic Orchestra’s New Year's concert. Performed at the famous Golden Hall of the Musikverein, renowned vocalists and ballet dancers add pageantry to the performance. 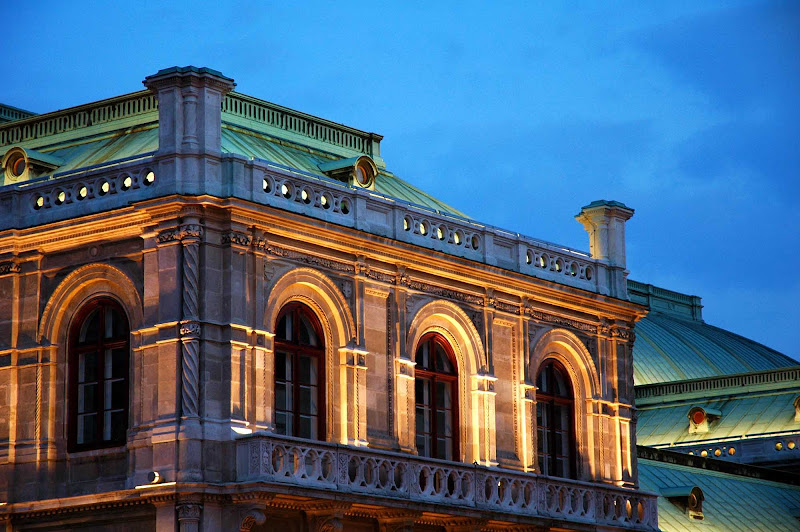 Schönbrunn, the former summer residence of the imperial family, is considered one of the most beautiful baroque palaces in Europe. The Habsburgs resided here the better part of the year in numerous rooms for the large imperial family in addition to representational rooms. Emperor Franz Joseph, who later married the enchanting Sisi and reigned from 1848 to 1916, was born here in 1830. The monarch spent his last years entirely in the palace, which became the property of the new Republic of Austria only two years after his death. Today, the palace is part of UNESCO’s cultural heritage due to its historic importance, its unique grounds and its splendid furnishings.

Open from November 15 or 20 to December 23 or 24, most Viennese Christmas Markets ("Christkindlmarkt", "Adventmarkt" or simply "Weihnachtsmarkt") are not so much for shopping as for eating and drinking. From midday until the late hours of the night, people gather at Christmas markets to drink mulled wine, punch and chat to one another and the occasional stranger. Entry to all of these markets is free. 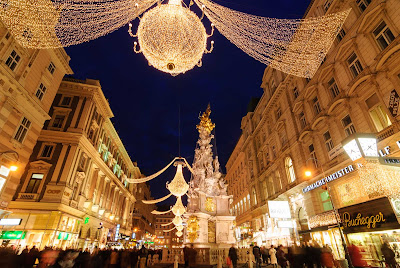 Austrian food is distinctive and delicious, and you can easily avoid hearty "meat and dumplings" offerings like wiener schnitzel (a bread-crumbed and fried veal escalope) or Knödel, a kind of dumpling. Make sure you try an Apfelstrudel for dessert. 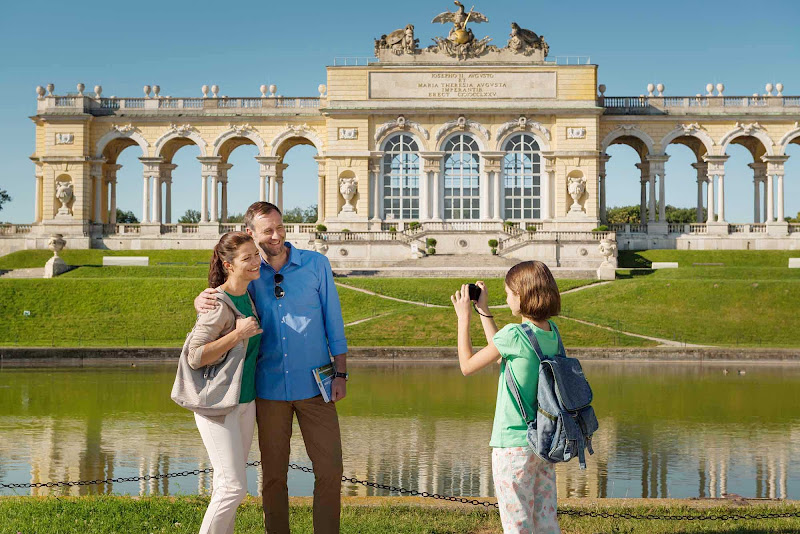 Popp Hackner / Courtesy of Austrian National Tourist Office Posing in front of the Gloriette at Schoenbrunn Palace in Vienna. The history of the palace and its vast gardens spans more than three centuries.

Vienna has a humid continental climate. The city has warm summers while winters are relatively cold with average temperatures at about freezing point, and snowfall occurring mainly from December through March. Spring and autumn are cool to mild. Precipitation is generally moderate throughout the year.

Vienna is situated along the Danube River. Your river cruise ship will dock near the city center at the Reichsbrucke, with easy access to the city center via the U-Bahn 1 Line.

Vienna has an extensive transportation network. Public transport is provided by buses, trams and five subway lines (U-Bahn). Trains are operated by the ÖBB. Vienna has multiple road connections, including motorways.

The Vienna Card 210 costs 18.50 euro and offers discounts and unlimited free travel by underground, bus and tram for 72 hours.

Language: German is the official language of Austria; however, English is commonly spoken in tourist areas.

Tipping: Although it is customary to leave a tip at restaurants and with taxis, it is usually less than 10%.

Safety: Austria is a very safe country; however, like all major destinations, avoid flashing cash and stay in well-lit areas at night.

How about you? Have you been to Vienna? Have any tips for visitors? We'd love to hear about your experience.

“Designated as an Intangible Cultural Heritage by UNESCO, Vienna’s many historic coffeehouses transport guests to an era when visionaries like Freud mingled over Mélange, Vienna’s answer to cappuccino. No other Kaffeehaus has perfected anachronism like the three-year-young Supersense. ... It also offer Wi-Fi.”

“The city is undeniably beautiful: at the center of town is the Golden Quarter, home to a splendid new Park Hyatt hotel and Europe's second-largest Louis Vuitton store after Paris, and from there the districts, or quarters, are arranged like Paris's arrondissements, spiraling out snail-like as they reach the Ringstrasse, the fabled thoroughfare that encircles the central city.”

“Zweitbester: The name means second best, but the organic burgers, venison ragout, and crème brûlée aren't so humble and make chef Robert Haider's restaurant one of the superior values in Vienna.”

“I like to visit Schönbrunn Palace , a Rococo-style residence where the Hapsburg rulers used to vacation. The best part is the Kronprinzgarten, with rare citrus fruit trees that smell heavenly. Nothing is more relaxing than a walk through the French Baroque gardens on the grounds of Belvedere, Prince Eugene of Savoy's 18th-century summer retreat.”

“Even though I had absolutely no interest in Vienna when my travel mate brought it up, it ended up being my favorite city. The people, the buildings, the atmosphere. Hell, I even has a European fling there! I love Vienna.”

“Walk in the footsteps of giants of classical repertory who made Vienna their home, including Ludwig van Beethoven, Wolfgang Amadeus Mozart, Johannes Brahms, Franz Schubert, Antonio Vivaldi, Franz Liszt, Gustav Mahler and a passel of Strausses.”