Sydney greets visitors with one of the world’s most spectacular harbors, marked by the sail-roofed Sydney Opera House, Harbour Bridge and thousands of yachts bobbing in azure waters. The city's OPT terminal offers just-arriving cruise passengers access to a dazzling central location. And beyond the harbor, there’s much to explore in bustling neighborhoods and beach enclaves.

Most trips to Australia begin with a flight into Sydney, on the island nation's east coast.  Nonstop flights are available from Los Angeles and San Francisco. After acclimating to the time change, many travelers set off on a cruise to the port cities encircling the continent, to neighboring New Zealand, southeast Asia or far-flung island destinations. Others visit Sydney as part of world cruise.

Either way, be sure to stay long enough to sample what the city and region have to offer: golden beaches, the iconic Opera House, great pubs, appealing wildlife preserves and more.

Cruise ships that call on Sydney

Top things to do & see in Sydney

Guided tours of the  iconic Sydney Opera House are designed for a variety of interests, including architectural, backstage and historic. If the schedule permits, the opera house has five theaters offering performances in opera, ballet, symphonic music and drama.

Sydney’s oldest district, The Rocks dates from the city’s origins as a British penal colony. Today it’s a great place to explore historic sites such as Cadman’s Cottage and the Customs House, to shop for Australian souvenirs and hang out at a pub. The district is also home to the Museum of Contemporary Art, which has important collections of modern paintings and sculpture as well as aboriginal art. 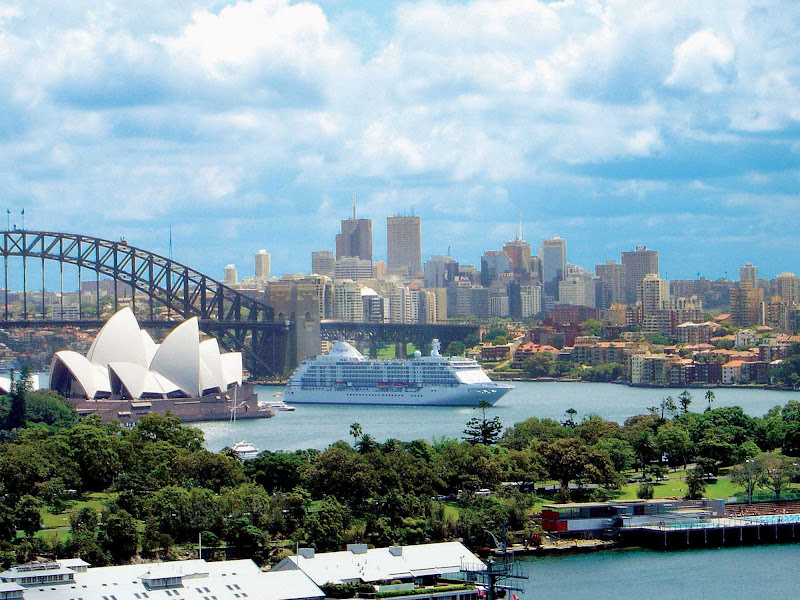 Sydney’s beachside enclaves, the most famous of which are Manly and Bondi Beach, are rich in  water activities, including swimming, surfing and parasailing, as well as cafes, shops and other diversions. Less crowded Balmoral Beach is a favorite among windsurfers and offers a wide esplanade lined with everything from chic restaurants to fish-and-chip shops.

Among local specialties to look for are aboriginal arts and crafts, including wooden bowls, ceremonial items and paintings, which are available in galleries throughout Sydney. For Australian opals, the National Opal Collection offers a showroom and demonstrations on how the fiery gems are cut and polished. Paddington Markets is a popular flea market crammed with stalls offering avant-garde clothing, crafts, jewelry and much more.

Sydney has everything from world-class performing arts at the Opera House to nightclubs, bars and comedy clubs. Located in The Rocks and convenient to the ships, The Basement is the city’s premier venue for live jazz, blues and rock. Popular nightspots in the city center include the Arthouse Hotel and Bambini Wine Room.

Sydney Harbor Bridge Climb: A 3.5-hour trek up, down and along the stairways and catwalks of the landmark bridge provides thrilling views of the harbor. Harnesses and special clothing make it a safe adventure.

Sydney Fish Market: Second only to Tokyo’s fish market in size, this site near Darling Harbor is the place to watch a fish auction shortly after the catch comes in, take a behind-the-scenes tour or sample delicious local oysters, shrimp, sushi and other seafood. 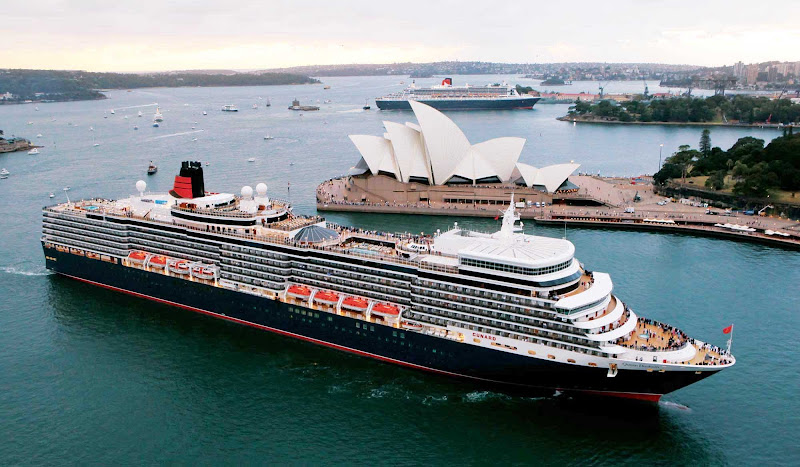 Courtesy of Cunard LineGet a close-up view of some of Sydney's most famous landmarks while Queen Elizabeth sails its coast.

The spring months of October-November and fall months of March-April offer idyllic weather, but even the winter months of June-August bring mostly mild and sunny days. December-February are typically hot and humid but a great time to experience ime to experience Sydney’s summer festivities and beach ambience.

Most cruise ships dock at the Overseas Passenger Terminal in Circular Quay, within walking distance of The Rocks, Opera House and other waterfront sights.

Circular Quay is the city’s mass transit hub, including for the light rail system serving downtown Sydney and buses and trains to outlying areas. Taxis are plentiful at the ship terminal, with reasonable fares for points within the city center. Circular Quay is also the departure point for Sydney Ferries, a fun and scenic way to explore the harbor and visit such areas as Manly, Darling Harbor, Olympic Park and the zoo.

Documents: U.S. and Canadian citizens will need a valid passport and an Australian visa.

Safety: Bag snatchers, pickpockets, water hazards, spiders and sunburns are just a few of the Aussie safety risks. For the most part Sydney is like any other large metropolis, but the main hazards you'll face in Sydney are at the beach. Never mind the snakes, spiders and sharks and any number of other venomous creatures, it's drowning you should be worried about. Follow the beach safety rules and "slip, slap, slop"  (slip on on a shirt, slap on a hat and slop on some sunscreen)!

How about you? Been to Sydney recently, or planning to go? Tell me what's on your must-do-in-Sydney list.

“(Head to) the wonderful, absurdly declious, crazy-ass Argentinian-themed Porteño, the restaurant that takes the new-to-Australia craze for fatty hunks of meat to extreme lengths. And every night, a line down the street.”

“Hike the gentle Bondi to Bronte Coastwalk, which winds two miles along sandstone cliffs and white sand beaches. Don’t miss the Aboriginal rock carvings, such as the shark and whale south of Mackenzies Point.”

“Rent a car or hop on one of the bus tours that leave from Sydney and go wine tasting in the Hunter Valley (a two-hour drive from Sydney), which features some 50 wineries.”

“Australia has a virtual monopoly on the world's supply of opals. ...You can pick up opals all over the city, but if you want a valuable stone, you should visit a specialist.”