St. Tropez has come to define the French Riviera. The world's wealthiest and most eccentric flock here in the summertime. Some travel by yacht, and others arrive by jet, but all come to enjoy a season-long party before departing to let the small town recover again in time for next year.

It wasn't always like this. St. Tropez used to be an important French naval base, with its port overlooking the Mediterranean Sea, although its beauty did not go unnoticed though. Artists like Signac and Matisse and writers like Guy de Maupassant showcased the city's beauty, but the world only caught on in the 1950s when a young French actress named Brigitte Bardot captivated the world's imagination when her film, "And God Created Woman," was shot here.

From that moment on, the city was transformed from a quiet Mediterranean city into a Riviera hotspot, and everyone wanted to go to St. Tropez. Aerosmith wrote of taking a Permanent Vacation here, and one-named celebrities such as Jack, Oprah, Barbara and Elton have been spotted here. However, you don't have to be a star to enjoy St. Tropez's fine restaurants and hip nightclubs.

Courtesy of Visit Côte d'Azur • Ville de Saint-TropezSt. Tropez is known for both the old port and its beautiful beaches.

Top things to do & see in St. Tropez

Unlike the rocky beaches found further east along the Riviera, St. Tropez boasts of smooth golden sand, not to mention scores of smooth golden bodies. The best beaches are located closest to the town center. Plage des Greniers and Plage Bouillabaisse are usually packed with sun worshippers. A little bit out of town are the beaches of Plage de Pampelonne and Les Salins. A five-mile stretch of land called Route des Plages is home to some of the hottest beaches in the world. Plage de Moorea, Club 55 and Plage de Tahiti absolutely sizzle. As usual, topless bathing is the norm, and although nude bathing is officially frowned upon, that doesn't stop some brave souls from baring it all.

A lively and adorable town square, the Place aux Herbes, has been a center of activity for centuries. It's a busy little enclave of vegetable, fruit and flower market stalls. Try to see it in the morning.

Musée de l'Annonciade (Place Georges Grammont, 04-9497-0401) lets you soak in some culture when you're through soaking up the sun. Many of the paintings depict St. Tropez itself, but the paintings by such French luminaries as Seurat and Matisse make this museum stand out. The Musée Naval (Rue de la Citadelle, tel. 04-9497-5943) stands as a memorial to the days when the name St. Tropez meant more to sea admirals than to sun worshippers. There are models of ships and cannons, as well as old pictures of the town. The museum is part of the Citadelle, a structure dating back to the 1500s and a great place to stop for a picnic lunch. Le Maison de Papillons (9 Rue Etienne Berry, 04/9497-6345), or in English the House of Butterflies, is a naturalist's playground with its prodigious collection of butterflies. Walking amongst nature's most beautiful and delicate creatures is the definition of serenity.

No Riviera town would be complete without its fair share of shops and boutiques. Rue Sibilli is the trendy spot of choice, offering the latest in French fashion. Boutique Lily (Place des Lices, 04-9454-8630) sells the latest from Gucci, Prada and more. They have even opened a separate men's store (25 Rue Gambetta, 04-9497-3560). For souvenir hunters, Place des Lices has a biweekly open market, filled with small vendors peddling their wares. Antique hunters would be wise to check out Jacqueline Thienot (12 Rue Georges-Clemenceau, 04-9497-0570). 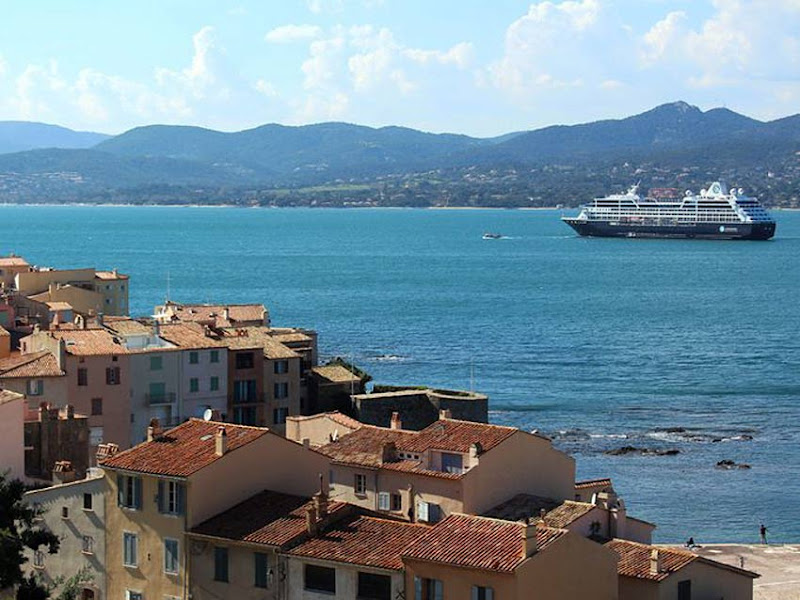 Courtesy of Azamara Club CruisesEnjoy an intimate atmosphere on your Azamara sailing when you visit cruise ports that larger cruise ships can’t access, such as the luxurious island of St. Tropez in France.

St. Tropez is famous for its tropézienne pie (tarte tropézienne), a cream-filled dessert. However, most of the cuisine remains the provincial style, with bouillabaisse being one of the signature dishes. The Byblos Hotel (Avenue Paul Signac, 04-9456-6800) has a great seafood-heavy restaurant that complements its quaint, provincial surroundings.  Les Mouscardins  (1 Rue Portalet, 04-9497-2900) is in St. Tropez's old town, and the veal is magnificent. The restaurant in the Château de la Messardiere (Route de Tahiti, 04-9456-7600) is also an excellent dining option.

Peak tourist season is, of course, the summertime. However, spring and autumn can also offer beautiful weather without the crowds that July and August bring.

Cruise ships dock at the Port of St. Tropez. There is road access from the port to the rest of the city, although the port is practically in the heart of the city itself.

Bicycles are one excellent way to get around town. Holiday Bikes (14 Avenue Général Leclerc, 04-9497-0939) offers well-maintained bikes at affordable prices. Bike along the beach path or head inland for a more rigorous ride. Taxis and buses are available, but you might as well enjoy St. Tropez's fresh air and cover the area on foot.

Language: French, but as it is a popular international destination, many speak English as well.

Safety: St. Tropez tends to be very safe. However, standard precautions of staying in well-lit areas at night and keeping valuables out of sight remain in place.

Do you know the way to St. Tropez? Tell us about your experience with a comment, photos or write a short article!

“La Part des Anges is an unpretentious neo-bistro with outdoor tables and a menu encompassing everything from spaghetti with local mussels to foie gras with truffles. Christophe Leroy, a locally famous caterer and restaurateur, is behind La Table du Marché, a convivial, easygoing spot with a 19-euro two-course lunch menu that changes daily. ... The seaside restaurant, La Vague d’Or, excels at unexpected and nuanced takes on seafood.”