Santo Domingo travel guide: What to do & see

Santo Domingo, capital of the Dominican Republic, is a vibrant urban center. Historic architecture, world-class museums, golf courses and water sports all combine to solidify its position as a top cruise destination.

Christopher Columbus is generally celebrated and certainly well known in North America. However, it is his brother, Bartolomé Columbus, who is recognized in Santo Domingo. Bartolomé founded Columbus City, which became the first European city in the New World. The historical references to the Columbus family in the form of monuments and statues are scattered throughout this Spanish colonial city.

The most important tourist destination of the city is the Zona Colonial or Colonial Zone on the western bank of the river and facing the Caribbean Sea. To the west of the Zona Colonial lies Gazcue, one of the city's oldest neighborhoods, filled with old Victorian houses and tree-lined streets. The city's waterfront George Washington Avenue, known as El Malecon, borders the Caribbean Sea and attracts many tourists because of its hotels, casinos, palm-lined boulevards and monuments. Surrounding the Gazcue area you will find the Palacio Nacional (seat of the Dominican government), the National Theater, the Museums in the Plaza de la Cultura and the Palace of Fine Arts.

Top things to do & see in Santo Domingo

Be sure to take advantage of the exquisite beach atmosphere at Boca Chica. Sit amid the aisles of palm trees and submerge yourself into the royal waters that are as blue as the larimar jewelry that is sold here.

One of the most exciting things Santo Domingo has to offer is its diversity. The place to go for the perfect blend of the past and the present is the Zona Colonial. Since it is the most historic spot the capital has to offer, you can find the most brilliantly preserved architecture here that dates back to the 16th and even the 15th centuries! The Zona Colonial is home to the many "firsts" of the New World. See how the very first hospital was organized and run. Study up at the first university, and worship in the oldest cathedral.

The Columbus Lighthouse Monument (809-591-1492), on the eastern end of Ozama, was constructed to celebrate the 500th anniversary of Columbus' arrival. According to legend, it gives his bones their final resting place encased in the mausoleum here. This site is a must see. Go anytime Tuesday through Saturday, from 10 am to 5 pm.

Be sure to stroll around the Plaza de la Cultura, which consists of six contemporary buildings. There is the beautiful National Theater, located in the Plaza de la Cultura (809-687-3191). The Museum of Dominican Man (809-687-3623) describes the lives of typical Dominicans and their celebrated cultures. This is their history museum where you can learn all about the Taino Indians who originally dwelled here, the European migrants and their African slaves. Also contributing to the beauty of their traditions are paintings and sculptures displayed in the Museum of Modern Art (809-682-8260).

One of the most picturesque natural sights that holds firmly onto its own history is Los Tres Ojos. It consists of several sweet-water lagoons that play along with the huge caverns built there. The history here goes back to pre-Columbian times. Witness this grand sight and learn how the Tainos conducted their religious ceremonies here.

Walk along the same streets as the wife of Columbus did hundreds of years ago. It is the city's oldest road, Calle de las Damas. Along this street, visit the massive tower, Torrede Homenaje, which kept the prisoners secluded from society. Also along this road, among the numerous historical sights, is the Hostal Nicolá's de Ovando. It is a hotel built in the very early 1500s that joins two stone mansions and contains a gorgeous intimate chapel.

Santo Domingo provides some of the best places to dive and explore the undersea world. La Caleta National Underwater Park consists of the Hickory, which is a sunken ship overrun by coral and fish. Many resorts offer supervised dives and classes for beginners. Gus Dive Center, on Roberto Pastoriza, is one of the most reliable and preferred diving boats (809-566-0818). Snorkeling is also an option that can be performed off of almost every beach.

Santo Domingo will not let you go home empty handed. The most popular items to buy are necklaces, earrings, or any other form of jewelry made out of amber. Be wary though, because many shops are overpriced. A good store for amber is Ambar Nacionale, where you can also browse through the coral and larimar pieces. It is located on Calle Arzobispo Meriño (809-686-5700). If you are more interested in artwork, go to La Atarazana, located in the Old City. Before you finish shopping, open up your wallet and splurge on the most superb rums in the whole world. Brugal, in particular, is a very good brand.

Santo Domingo dances into the night with the live music of merengue and bachata filling the air. The Malecón is one of the key places to experience all that Santo Domingo's nightlife has to offer. The streets here are never quiet and are lined with fine restaurants, food shacks and dancing. If clubs tickle your fancy, then go to Avenida Venezuela and Avenida Abraham Lincoln. 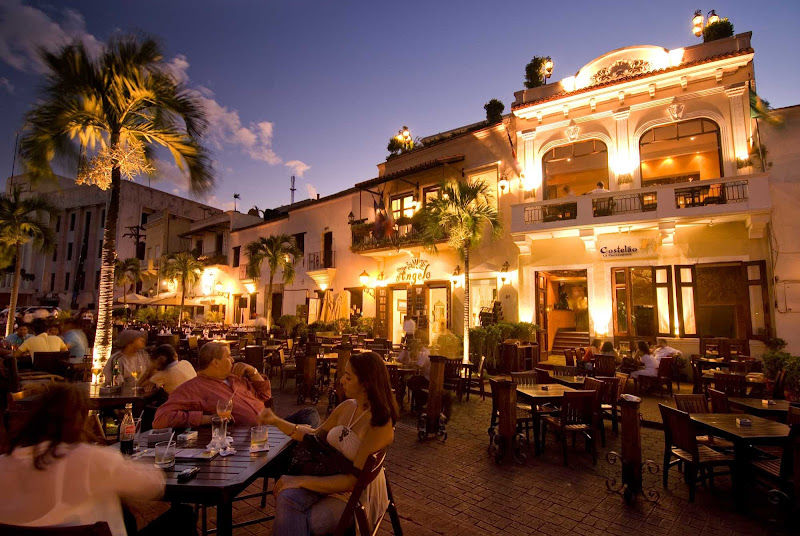 Ministry of Tourism of The Dominican RepublicPlaza De España lies at the heart of Santo Domingo's Zona Colonial (colonial zone).

Santo Domingo offers a variety of cuisines from around the world from Chinese, Italian and Mediterranean to Brazilian.

The following upscale restaurants cater to cruisers and tourists:

The following dining spots are frequented by locals:

Santo Domingo enjoys a tropical climate. Temperature averages from 73.4°F (23°C) in the morning to 89.1°F (31.7°C) by the afternoon. Generally, January and February are the coldest months, and August is the hottest month of the year. The island is prone to hurricanes especially during June 1 to November 30, but fortunately they receive many warnings beforehand to prepare their people and tourist of any harm. Santo Domingo is a great city to visit during any season, because the city's ideal tropical weather runs all year long.

Cruise ships docks directly in Santo Domingo at Puerto de Río Haina. From there, you can arrange for a taxi or bus to take you to any destination on the island.

The public bus system is almost always on schedule and its costs just 25 cents, so this is a great option for large or small groups to get around. Carreras are similar to the publicos but are more like private cars. However, these are not metered so make sure to name a price before closing the door.

Taxis are the best way to get around for the price. They are metered, and the average cost hardly ever exceeds $4.

Language: Spanish is the official language of the country. While people linked to the tourist trade generally speak English, knowing some Spanish is a great advantage.

Currency: The official currency of the Dominican Republic is the Dominican Peso. However most merchants will accept dollars or euros.

Safety: Poverty, though not as bad as next door Haiti, is still rampant and it is best you take precautions. Do not flash obvious wealth in poorer or middle class sections of the city (lots of jewelry, expensive camera, big watches, etc.). Keep your bag away from the street when walking as it can be snatched by kids on mopeds and keep a firm grip on it. Keep your passport on a ship and in a safe. If you are Caucasian (no matter how you are dressed), expect to have a lot of insincerely friendly people on the streets follow you and strike up conversation with you. They are only talking to you in order to get money from you.

Have you traveled or cruised to Santo Domingo? What was it like? We'd love to hear about your experience.