Roatan port guide: What to do & see

Roatan, the largest of the Bay Islands, lies about 35 miles off the coast of mainland Honduras. Just 32 miles long and three miles across at its widest point, Roatan is an island dedicated to the senses, with palm trees, shimmery sand beaches and the second largest barrier reef in the world off its shores.

Roatan is famous as a dive and snorkel site and popular for sport fishing as well. The Roatan Institute for Marine Sciences, with facilities at Anthony's Key Resort, is dedicated to preserving the island's natural resources, particularly the reef, but is best known in the tourism industry for introducing willing cruise passengers and others to a group of personable Atlantic bottlenose dolphins.

Roatan's interior landscape is mostly dense, tropical jungle. Its culture is an eclectic mix of Spanish, British, African and Paya Indian, so it's no surprise that Roatan's history is filled with stories of pirates and slave rebellions. The great majority of the citizens on Roatán speak English, especially in tourist areas.

The best of Roatan's offerings for visitors include the riches provided by nature — glorious beaches, living reefs, endemic creatures and a sense of an island that has not yet been completely changed by tourism.

Cruise ships that call on Roatan

Top things to do & see in Roatan

One of the easiest beaches to access from the cruise dock is Mahogany Beach, part of Carnival Cruise Line's Caribbean holdings. There's a chairlift from the dock area to the beach. Tabyana Beach, popular for shore excursions, is a place to have lunch, shop, paddle kayaks and more. The beaches at West End and West Bay are just a 10-15 minute ride from the cruise docks. They're beautiful but they do get crowded when ships are in port.

For an immersion experience it's hard to do better than the dolphin programs offered by the Roatan Institute for Marine Sciences, located at Anthony's Key Resort on Sandy Bay. There are programs for all ages, from dolphin meet-and-greets to swimming with them or learning to be a trainer.

Arch's Iguana and Marine Park is one of the treasures on Roatan and provides safe haven for hundreds of iguanas. Once plentiful on the island, iguanas have been over-hunted for food and although protected are still a staple in Roatan cuisine. Efforts at this farm have helped to keep local iguanas off the endangered species list.

Gumbalinda Park in West Bay is part animal preserve, part gardens and part adventure park. It features a beach, cafe, shopping, canopy tour, zip line and activities for the whole family. If coming face to face with monkeys and parrots sounds good, this is your place.

Just off Roatan is the second largest barrier coral reef in the world, making scuba diving a huge draw here. The waters off Roatan's shores are teeming with marine life, and there are a variety of great dive sites for visitors to experience. Most ships that dock here offer scuba diving among the shore excursion options. 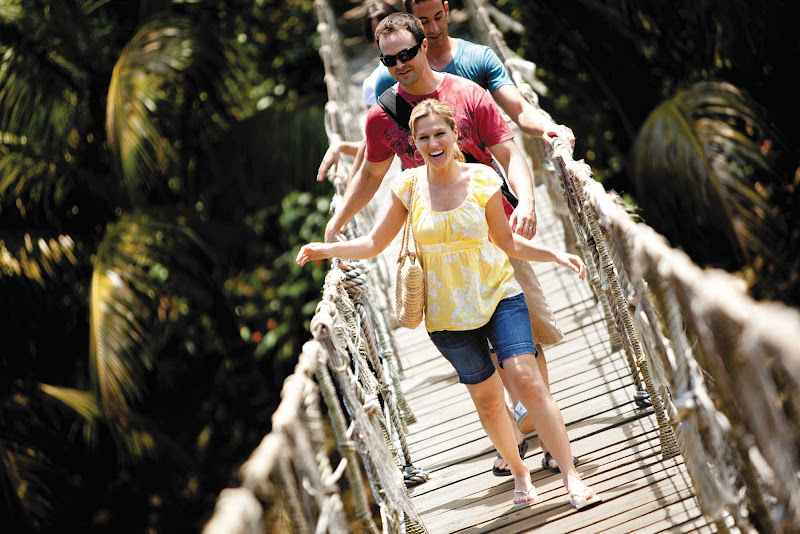 Some of the inns and resorts in West End have restaurants with beach and water views, making them a nice spot to grab a drink and lunch out of the sun but still close to the water.

Yaba Ding Ding in the town of Coxen's Hole is one of the places that sells art, crafts and apparel made on Roatan Island.

Cruise ships anchor on the south side of Roatan at one of two places:

In addition to land taxis there are also water taxis. One of the most popular for tourists is the one between West End and West Bay, where some of the island's most popular beaches lie. Most will take U.S. dollars.

Taxis are available outside the cruise port, but make sure you agree on the fare (and the currency) before entering the car, as most taxis do not have meters. The taxi fare should be about $10/person each way to get to West End and $15/person to West Bay from the cruise ship dock

Minibuses run in either direction from Coxen Hole. There aren’t many dedicated bus stops, instead just flag down the bus by waving at it. Pay the driver’s assistant when you board – about $1 on most routes.

Language: The official language of Roatan is Spanish however the most common language spoken is English.

Store hours:  Most stores are open from 9 am to 5 pm Monday to Saturday, and are closed for lunch from approximately 12 noon to 1 pm. While there are some decent shops and some crafts to be found, most of what's available are outdoor stalls with relatively inexpensive items.

Tipping:  You can bargain for almost everything in Roatan so be prepared!

Currency: The Honduran Lempira but U.S. dollars are widely accepted.

Safety: The U.S. Department of State has an active travel warning in place for mainland Honduras, where crime is unfortunately high. Roatan is considered much safer than mainland Honduras but precautions are important. Don't  take expensive jewelry or lots of cash to shore with you. Book taxis at the ports and make sure they're licensed. Book tours through your ship or established, reputable tour operators only, don't wander around alone on deserted beaches and stay away from large crowds as pickpockets target them. The State Department warning says this: "The vast majority of cruise line passengers in Honduras experience no problems, but incidents of armed robbery and carjacking have been reported. Coxen Hole on the island of Roatan should be avoided after dark." See the full report.

How about you? Have you been to Roatan? Have any tips for visitors? We'd love to hear about your experience.

"Use the sea. It's available 24 hours a day. One night on the dock at Barefoot Cay I saw the phenomenon of bioluminescence — an underwater fireworks show courtesy of glowing plankton. A six-pack of Port Royal beer added to the moment: $5.”

“From almost any shore on this largest of Honduras' Bay Islands, you can swim out to the reef and check on the neighbors — barracudas, sea horses, eagle rays. You can lie in a hammock. Or head out to a golf course, which isn't crowded. Why? Because the island isn't just for those you want to while away hours.”