Rio de Janeiro travel guide: What to do & see

Brazil's key tourist destination is positioned within a spectacularly wild natural landscape. This seductive city is easy to visualize: flamboyant Carnival parades, beaches packed with locals in micro bikinis, the mountaintop statue of Christ the Redeemer with his outstretched arms and the rhythm of the samba beating in the background. The citizens of the city, known as Cariocas, call it "the wonderful city" for good reason.

Rio de Janeiro is divided by a mountain range into two areas: the North Zone and the South Zone. The South Zone holds most of the city’s sights, including the famous beaches of Copacabana and Ipanema, paved with black-and-cream swirl-pattern mosaics, as well as Sugar Loaf Mountain. The North Zone is best known for samba schools, Maracana Stadium (which is hosting the soccer matches of the 2016 Olympics), and the Imperial Palace, home to the National Museum and surrounded by the Quinta da Boa Vista park.

The raucous Carnival festival is the largest in the world. If you are in Rio when it is held (usually during February), you will be swept into the passionate and enthusiastic celebration.

Cruise ships that call on Rio 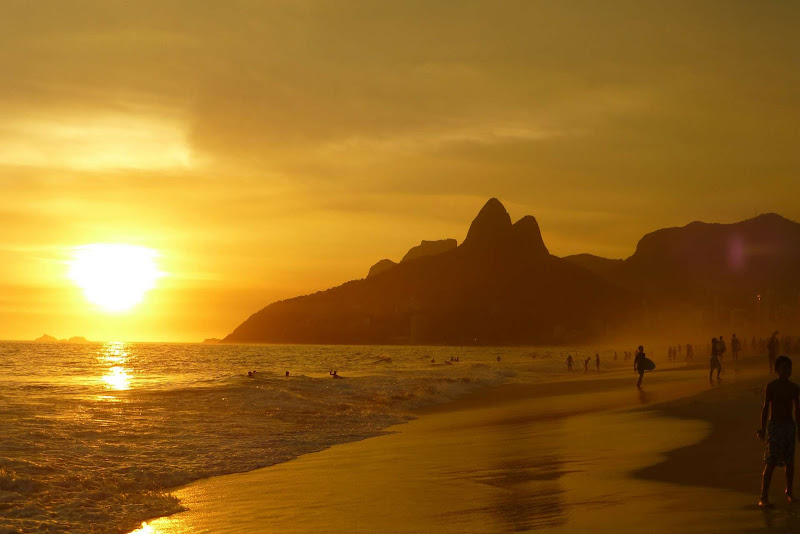 Top things to do & see in Rio

The 23 beaches of Rio de Janeiro connect seamlessly to form a 45-mile stretch of warm sand and sparkling water. Beaches can have strong currents and riptides so check for lifeguard flags indicating whether the area is safe for swimming. The water is cold so you may prefer to lounge on the sand and watch the passing parade of pulchritude. All of the beaches are public and easily accessible by taxi or bus service.

Two-mile Copacabana is an ideal spot to spend an entire day. Explore the 18th-century fort, a favorite location for photographers; sip a refreshing drink from one of the many juice bars; and watch kids play soccer. Vendors ply umbrellas and other beach paraphernalia. Ipanema and Leblon are also wonderfully scenic and full of activity: think beach volleyball, footvolley — a volleyball and soccer mashup played only with the feet and head — and bodybuilders displaying their muscles.

The most famous landmark in Rio De Janeiro is Corcovado Mountain and the 98-foot Cristo Redentor statue that adorns it. The statue was a monument erected to celebrate the centennial anniversary of Brazil's independence from Portugal. Completed in 1931, you can now get an up close look at it by taking the Corcovado Railway to the top of this stunning viewpoint.

This church is located at Rua Dom Gerardo 68 (21-2206-8100) in the middle of Rio de Janeiro. This monastery and church were begun in 1617 and not completed until 1641. The main altar of the church is truly something to behold, and the woodcarvings covered in solid gold are an incredible sight. The silver chandeliers and detailed artwork of the Mosteiro are stunning as well. If you happen to be here on a Sunday, don't miss the Gregorian choir.

This museum, located at Avenida Rio Branco 199 (21-2240-0068), features the talents of numerous Brazilian artists. One of the most notable works is Leandro Joaquim's landscape of Rio de Janeiro from the 18th century. In addition to Brazilian art, the national museum contains a sculpture gallery with works by Rodin, Brazilian sculptor Victor Brecheret and others, European engravings, and collections of African and folk art.

Some portions of this great edifice on Praça Marechal Âncora (21-2550-9224) date to 1603, although the majority of what surrounds the actual museum was constructed in 1762. This is the best place to catch a glimpse of Brazil's history and heritage. Art, maps, papers, coins, weaponry, and much more are on display here.

Behind Ipanema Beach, discover a quieter Rio, 338 acres of plants, trees and birds. Stroll lanes lined with palm trees, visit the orchidarium, and add to your birding life list with sightings of various parakeets, toucans, tanagers and more. The botanical garden boasts more than 5,500 plant species, including giant water lilies, bromeliads, and insectivorous plants that are sure to delight the kids.

At some point you'll want to order a Caipirinha, Brazil's national cocktail, made with cachaça (a sugarcane hard liquor similar to rum), sugar and lime. "It's for breakfast, lunch and dinner," our Brazilian friends tell us.

Since it is south of the equator, the seasons in Brazil are reversed, with the winter months between December and March being the warmest and best times to go if you want to hit the beaches. Carnival is the most popular time of year in Rio due to its spectacular celebration, which usually some time in February or early March.

Cruise ships dock at the Port of Rio de Janeiro.

Rio's subway system, known as the Metro, is both affordable and efficient. Trains run to many destinations in the city during the hours 6am to 11pm. Taxis comb the streets as well. Rates are cheaper before 8pm and during the weekdays. If you'd like to arrange for taxi service, contact Coopertramo (21-2260-2022) for specific rate information. You can opt to rent a car while in Rio, but be advised that driving here is not for the faint of heart! Contact Hertz (21-2275-7440) for daily rental rates and availability.

There is free public wi-fi on the entire beachfront: Copacabana, Ipanema, Leblon.

Tipping: In restaurants a 10% tip is customary. Taxi drivers don’t receive any tip.

Safety: Although most visitors don't experience difficulties in Rio, there is a history of crime and poverty in Rio de Janeiro. Tourists are often considered easy targets of crime and the city can be dangerous. Make sure to read up on safety precautions before visiting. We recommend that you leave all valuables, including your passport and jewelry, on the ship locked up safe.

Have you been to Rio? What was the highlight? Please share a tip, discovery or anecdote.

“I would spend hours wandering through the center's crazy quilt of streets, meeting friends for a cold beer at the cavernous Bar Luiz on Rua da Carioca, or slipping into used-book stores, taking my discoveries to the Real Gabinete Portugués de Leiture, the ornate but almost always empty public reading room on Rua Luis de Camões. Thankfully, as I walked these streets now, I found many of my old haunts surviving as if frozen in time.”

“A top-flight meal with high-end service can be an elusive combination in Rio. Eureka! Térèze, within the steeply sloped grounds of the Hotel Santa Teresa. The elegant dining room offers peek-a-boo glimpses of the twinkling city, and the cuisine is international but laced with Brazilian touches. ... Dinner with drinks is about 250 reais a person.”

“Vehicles are banned on Ilha Grande, a Robinson Crusoe-style island that's home to Praia de Lopes Mendes, a prized two-mile swath of deserted shore. Hitch a ride in a fishing boat or hike a forest trail, ravines, and serrated peaks to get there (it's worth it).”