A beguiling island that combines medieval architecture with beautiful Aegean beaches, ancient temples, and outdoor markets and cafes, Rhodes is a complete contrast to other Greek Islands. Cruising to Rhodes — just 12 miles off the coast of Turkey — is like stepping back into a medieval world of knights and castles. It’s a delight to wander through the Old Town with its deep moat, cobblestone streets, city walls and palaces built by the Knights of St. John more than 700 years ago.

Rhodes Town bears witness to that long history. The ancient city features a classical stadium and the ruins of the Temple of Apollo. The old city is a walled town with medieval buildings and streets harking back to the days of the Crusades. The Colossus of Rhodes, one of the Seven Wonders of the Ancient World, is reputed to have once stood guard over the harbor.

However, Rhodes also boasts features more commonly associated with other islands of Greece, such as the seaside village of Lindos with its whitewashed houses and hilltop acropolis, as well as inviting beaches and plenty of tavernas where you can relax at an outdoor table with a glass of ouzo and a serving of baklava drizzled with the local honey.

Cruise ships that call on Rhodes

Top things to do & see in Rhodes

Palace of the Grand Masters

Built in the 14th century by the Knights of St. John, the Palace of the Grand Masters in Rhodes Town is now a museum with exhibits tracing  the story of the island from ancient through medieval times. 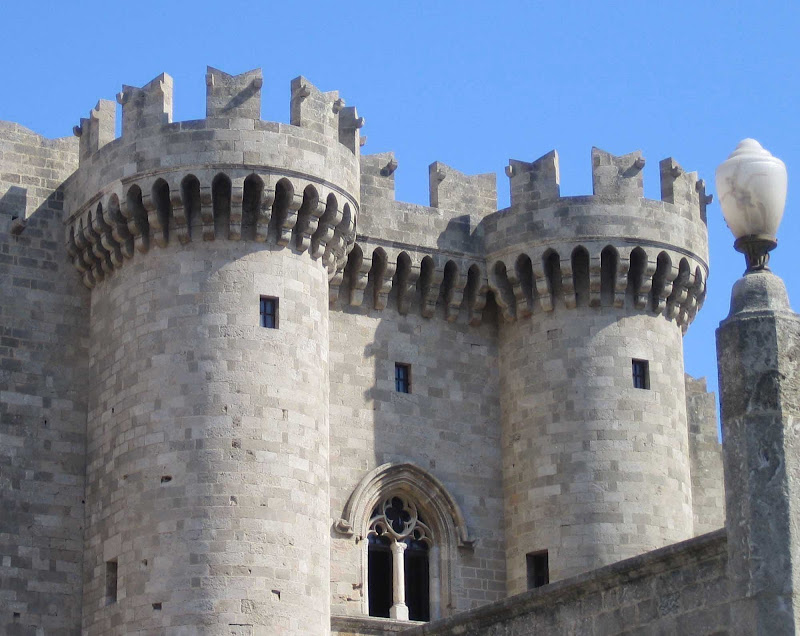 Roberto Faccenda / Creative Commons BY-SAPalace of the Grand Master in the city of Rhodes, Greece.

Poised between the Old Town and New Town of Rhodes, Mandraki Harbor is the place to pick up a boat excursion or to wander through the Nea Agora (New Market) with its shops and cafes.

The medieval Hospital of the Knights is the setting for this Archaeological Museum containing important ancient treasures, including two representations of the goddess Aphrodite discovered on the island.

On the east side of the island, Thermes Kallitheas is a mosaic-tiled bath complex built by the Italians in the 1920s, which is no longer in use but a lovely place to explore. A nearby  beach and café make for a relaxing afternoon.

Gorgeous hillside views, plus the ruins of an ancient temple and a restored 13th-century monastery, make Ialysos worth a visit.

Some 35 beaches of soft sand and sparkling waters ring the island. Among the most popular is Elli Beach, which is just north of the Old Town that has beach umbrellas and other services for visitors. 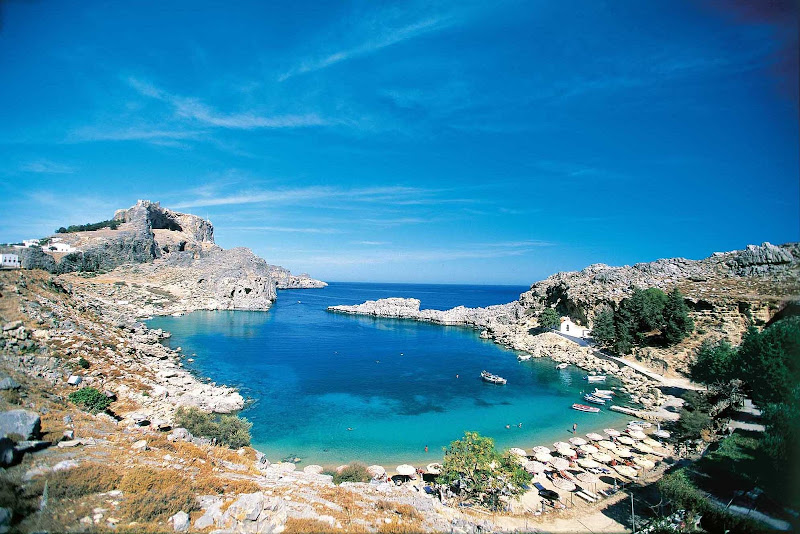 Courtesy of Norwegian Cruise LineExplore the beautiful beaches and rugged coastline of the Greek island of Rhodes.

Rugs, ceramics, leather goods, silver and gold jewelry and local olive oil and honey are among the good buys to be had. Among the prime shopping areas are Nea Agora in Mandraki Harbor and Sokratous Street in Old Town.

The Casino of Rhodes offers slot machines and table games in a 1920s structure of Arabic and Byzantine design. The Nelly Dimoglou Dance Theater performs traditional Greek folkloric dances at the Old Theater during the summer.

Acropolis of Lindos: It’s well worth the hour so drive from Rhodes Town to Lindos, a village of 17th-century whitewashed houses and a crescent-shaped beach. A steep, winding path leads up to the acropolis with its medieval palace, Byzantine chapel and Temple of Athena dating from the 4th century B.C. Visitors can hike up the path or ride a donkey to the top for awe-inspiring views of the Aegean waters far below.

Fresh seafood, locally grown tomatoes and other produce, plus local wines make it worthwhile to have lunch off the ship. At a taverna, try a sampling of small plates known as mezedhes, enjoying olives, hummus, meatballs, fried smelt, garlicky yogurt dip, stuffed grape leaves and other specialties.

In Rhodes Town, Dinoris offers the chance to dine on delicious fish dishes in a splendid medieval building with an outdoor garden courtyard. To Steno, also in Rhodes Town, is a simple taverna known for its selection of mezedhes. Mavrikos, located on the main square of Lindos, is considered one of the best restaurants on the island, especially for grilled swordfish, baked lamb and lobster risotto.

Summer brings hot, dry weather and by far the most crowds. The shoulder seasons bring balmy weather and fewer visitors. 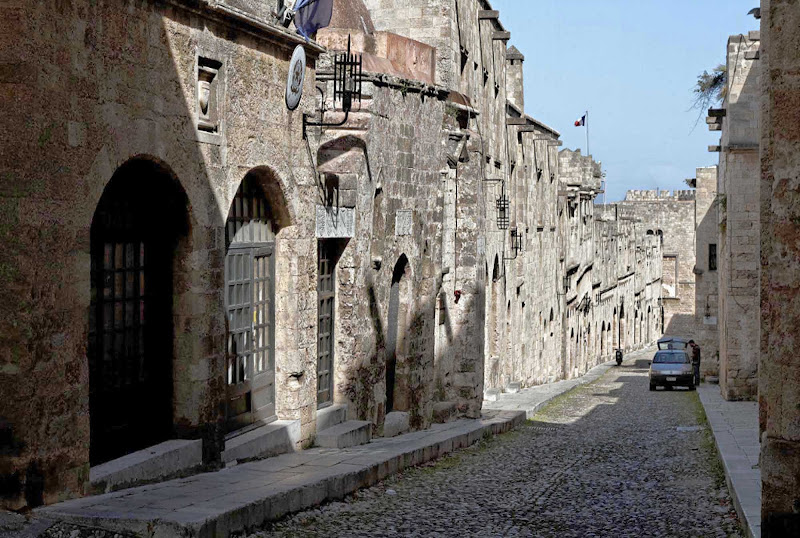 Cruise ships dock in Rhodes Town on the northern tip of Rhodes, about a 10-minute walk to Old Town.

Old Town and its attractions are easily explored on foot, but uneven surfaces and cobblestones make comfortable shoes a must. Taxis are plentiful and can be hailed at taxi stands throughout the island. Fares to various destinations are posted at the stands.

Have you visited Rhodes? Please share a story, tip or discovery. What was the highlight of your experience on this magical Greek isle?

“Just opposite the old Grand Master's Palace in Rhodes Town is Kalogirou Art, an antiques store that is considered to be the island's top destination for ancient furniture, carpets, and decorative pieces. Its mosaic floors and airy gardens are works of art.”

"Parts of the road that runs the 2½ miles along the top of the walls is sometimes accessible for an extra fee to visitors to the Archaeological Museum and to the Palace of the Grand Masters."