The City of Light is a pleasure to behold, whether it’s from the graceful bridges spanning the Seine, atop the Eiffel Tower or among the backstreets and hidden courtyards of the Left Bank. It’s simply the ultimate destination for anyone who loves art, superb food, café life, history, shopping and iconic architecture.

Located in the north of the country on the river Seine (the locals pronounce it Sen), Paris brims with a vibrance and charm that continues to intoxicate visitors. And while you may not associate Paris with cruising, the city is magical when seen from a river cruise ship.

Many river cruises combine Paris and Normandy, starting and ending in Paris. Following the Seine, these itineraries typically include such highlights as the D-Day landing beaches and the seaport village of Honfleur, a favorite of the Impressionist painters. Some river-cruise companies also offer the chance to combine Paris/Normandy cruises with itineraries that include a transfer from Paris to Chalon-sur-Soane for a cruise into Burgundy and Provence. Paris is also included in some multi-country itineraries through Europe.

Cruise ships that call on Paris

Top things for cruise visitors to do & see in Paris

Soaring more than 1,000 feet and containing over 18,000 metal sections, the Eiffel Tower, iconic symbol of Paris, offers three levels of viewing sections open to the public.

Arguably the most famous museum in the world, Musee de Louvre holds an impressive display of art, art history and culture dating back to the 6th century BC. The Louvre has more than 200 halls filled with collections that encompass the ancient civilizations of Greece, Egypt and Rome as well as many important European works of art dating from the Middle Ages up through the mid-19th century, including the Mona Lisa and Venus de Milo. At the entrance, I.M. Pei's impressive glass pyramid has been greeting guests since 1989.

This former train station is a splendid backdrop for the Musee d'Orsay and France’s incomparable national collection of art created between 1848 and 1914. The top floor is filled with famous works by artists such as Degas, Monet, Manet, Pissarro, Renoir and Van Gogh.

Housed in a beautifully restored 17th-century mansion, the Musee Picasso offers an important collection by Pablo Picasso, including paintings, sculpture, ceramics, prints and memorabilia from the artist’s life. 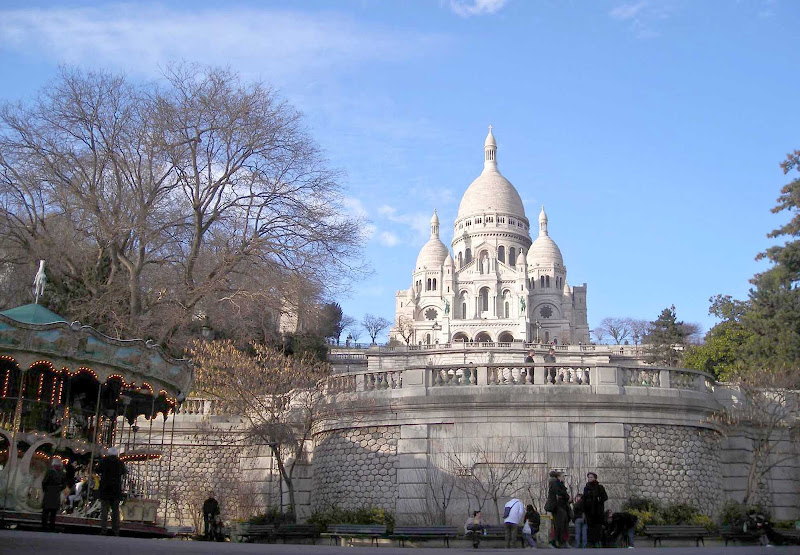 Crowing the top of the hill of Monmartre, the Basilique du Sacre-Couer with its distinctive white dome offers breathtaking views of Paris. Its base can be reached by a tiny funicular train.

Built to honor the military might of Napoleon I, the Arc de Triomphe, rising over the Champs-Elyssées, is the site of the Tomb of the Unknown Soldier, marked by a memorial flame.

It’s hard to tell which is more arresting: the modern art contained within the building or the building itself. Designed in the 1970s, the Centre Pompidou is an amalgam of glass, steel and brightly colored pipes which has caused some critics to call it “the gasworks.”

Musee Rodin holds an impressive collection of bronze and marble sculptures by Auguste Rodin, including The Kiss and The Thinker. It's housed in a splendid 18th-century townhouse with an adjoining garden filled with sculptures and shade trees.

At the Pantheon in the Latin Quarter, you'll find the final resting place of Voltaire, Victor Hugo and Marie Curie. It's a great place to look out over all of Paris.

Want to stay away from the usual tourist destinations? Red Wheelbarrow (22 Rue St. Paul) is a cool English-language bookstore in the Marais neighborhood in the heart of Paris where you can browse through stacks of fiction and nonfiction and call on the knowledgeable staff for help.

A masterpiece of French Gothic architecture, Cathedrale Notre-Dame de Paris dates from 1163 and took nearly 200 years to complete. The magnificent façade is embellished with gargoyles and flying buttresses, while its interior is bathed in light from a spectacular series of stained-glass windows. The tragic fire of April 2019, however, means that it will be several years before it reopens to visitors.

Some other suggestions of things to do and see comes from Paris-based GlamourApartments.

Whether having a meal at a café, patisserie, bistro, brasserie or chic restaurant, you'll find excellent French cuisine all over the city. Paris is a moveable feast, and some possibilities include:

GlamourApartments, an English-language site, has a lengthy roundup of quality restaurants in Paris with good descriptions.

Shopping is a fascinating activity almost everywhere in Paris, whether it’s at the elegant galleries and fashion houses of the Faubourg St-Honore or the little book stalls and souvenir stands along the banks of the Seine. With its beautiful glass dome and wide-range of apparel, the Galeries Lafayette is the grandest of department stores and an attraction in its own right. Open every day, the Cligancourt Flea Market offers acres of vendors selling antiques and collectibles. Paris is filled with wonderful chocolate shops and gourmet food stores at every turn, especially around the Place Madeleine. The most celebrated of these is Fauchon, but even the ubiquitous Monoprix supermarkets offer delectable goodies. Here's a comprehensive roundup of shopping options in Paris.

Benh Lieu Song / Creative Commons BY SA 3.0A wonderful evening capture of Pont des Arts, the pedestrian bridge over the River Seine in Paris. It links the Institut de France and the central square of the Louvre. You can also see Notre Dame and Sainte-Chapelle.

For a close-up look at grimacing gargoyles and sweeping views of Paris, climb the 387 stops to the top of the north tower of Cathedrale de Notre-Dame.

Spring and fall are the best seasons to visit Paris, with its colorful landscapes and peak café culture, but rainy days do occur (it can rain up to 25 inches per year). June and September generally have glorious weather. Visitor attractions are at their most crowded in the sweltering summer and some restaurants and shops close down in August. Winters are cold, with occasional snow – making the city look even more magical. But bring a coat: The average high temperature in January is 43°F.

Most ocean cruise ships dock in Le Havre, about a two-hour trip into central Paris by train. But chances are you'll be flying to Paris and embarking on a river cruise from there.

Many of the major historic attractions and shopping areas in central Paris are within walking distance of each other. The city offers bus service as well as the efficient Paris Metro subway system; one- to five-day metro passes called Mobilis or Carte Orange are available to travelers. Taxis cannot be hailed from the street, but taxi stands are plentiful, especially near Metro stops. A fun alternative is the Batobus, boat service that runs up and down the Seine, stopping at major points of interest.

Language: French is the official language, but many people speak at least some English (if begrudgingly). Tip: Use a few polite French words and phrases to placate shopkeepers and help facilitate communication.

Safety: While Paris is considered a relatively safe city, you should take precautions in public and be especially on the lookout for pickpockets. See our safety tips.

Have you been to Paris? Please share a story, tip or discovery. What was the highlight?

“Bills in bars and restaurants must by law include service, so tipping isn’t required, but it is polite to round your bill with small change, unless you’re dissatisfied. In expensive restaurants, it’s common to leave an additional 5% on the table.”

“To reach the top of the Champs-Elysées, take the Metro to the Arc de Triomphe, then saunter down the grand boulevard.”

“Quedubon — Near the Parc des Buttes-Chaumont, this bar specializes in organic wines and is worth the trek for a chin-wag with the eccentric owner, Gilles Bénard. The traditional French fare — boudin, pâté, duck, steak — is also good (22 rue du Plateau, 19th arr.).”

“The latest must-see attraction in Paris floats like a cloud of glass above the treetops of the Bois de Boulogne. The Fondation Louis Vuitton, devoted to contemporary arts and culture from France and beyond and supported by the luxury fashion conglomerate LVMH, opens on October 27. The building, designed by Frank Gehry, has galleries for its art collection (Daniel Buren; Rineke Dijkstra: Ellsworth Kelly), spaces for site specific works, and an auditorium for music and dance.”