Norway travel guide: What to do & see

Norway offers cruise passengers some of the most spectacular coastal scenery anywhere. And great adventures await by taking excursions along the fjords and up into the mountains and meadows. Oslo is rich in museums and cultural offerings, especially pertaining to art and maritime history.

Cruise ships that call on Norway

We love this drone video showing the natural beauty of the fjords around Stryn on the west coast of Norway, an area frequented by many cruise ships. 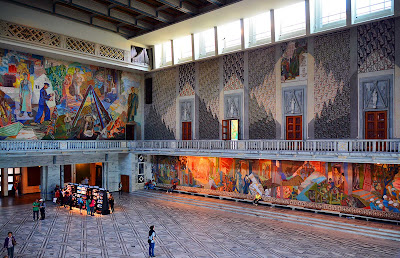 Norway’s capital city of Oslo is more laid-back than the other Scandinavian capitals, but it’s filled with cultural attractions that warrant longer than just a day in port. Among the must-see sites is the Nobel Peace Centre located in a repurposed historic train station just across from the waterfront and near City Hall. The center honors recipients of the Nobel Peace Prize, among them the Dalai Lama and Martin Luther King, Jr., with videos, interactive exhibits and more.

Art lovers will want to head to the Munch Museum, which displays the world’s largest collection of works by the expressionist artist Edward Munch, and the Vigeland Sculpture Park, a fabulous outdoor sculpture garden with pieces depicting the cycle of human life.

Two other unique places are the Kon-Tiki Museum, where visitors can see the balsa wood raft that explorer Thor Heyerdahl sailed from Peru to Polynesia, and the Norwegian Folk Museum, an open-air collection of vintage buildings from around the country.

Conveniently for cruisers, some of Oslo’s most intriguing sights are on or near the waterfront, including the Astrup Fearnley Museum of Modern Art and the stunning Oslo Opera House, built from 36,000 slabs of white marble. The waterfront is also a great place to simply enjoy the outdoor cafes, street musicians and trendy shops. 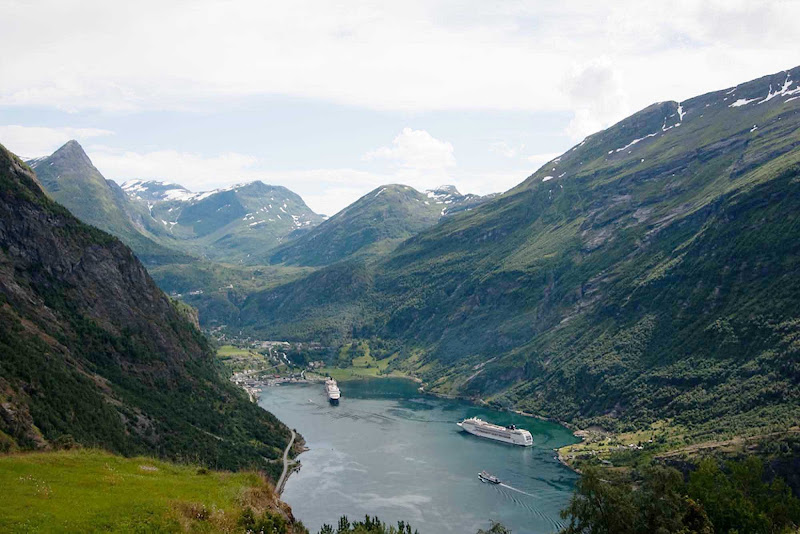 Considered the “gateway to the fjords,” many of the major sights to see in the small port city of Bergen are clustered around its stunning harbor lined with the charming wooden houses of the medieval Hanseatic Quarter. The Hanseatic Museum gives visitors the chance to tour one of these historic structures that belonged to a merchant of the Hanseatic League, a medieval trade organization. For lunch, head over to the Fish Market to sample smoked salmon and other local seafood treats as well as to shop for souvenirs and fresh fruit. For a thrilling perspective of the landscape, take the funicular ride up to the top of Mt. Floyen and wander the hiking trails.

Located at the head of the Aurlandsfjord, the small village of Flam is the place to explore two of Norway’s most stunning fjords, including Naeroyfjord. The Flam Valley is a paradise for mountain bikers and hikers, with its waterfalls and gorgeous mounting scenery. Just outside of Flam, Otternes Farms is a cluster of centuries-old mountainside farms that give visitors a glimpse of traditional rural life.

This small village is surrounded by great hiking trails and the majestic Geirangerfjord, a UNESCO World Heritage Site.

Stavanger offers a pleasing mix of outdoor and cultural diversions. Old Stavanger, the historic district, is an enjoyable place to wander through narrow lanes lined with old wooden houses, art galleries and a 12th-century church. The Norwegian Petroleum Museum has interactive exhibits and a model drilling station kids can climb on. The Norwegian Emigration Center tells the story of emigrants who left Norway for America and is also a good place for anyone researching their Norwegian roots. 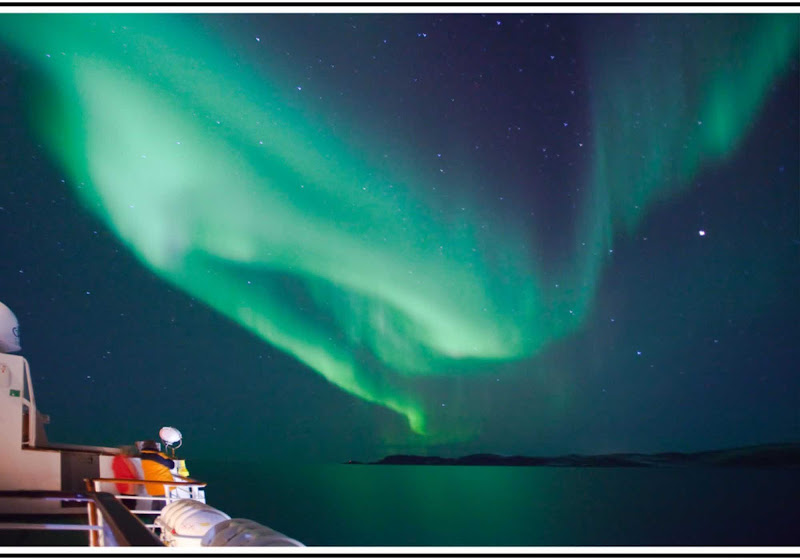 Basemann / Courtesy of HurtigrutenTravel on the Hurtigruten expedition ship Nordlys to see the amazing sky show of the Northern Lights. This aurora was seen over Lofoten, Norway.

Norwegian woolen sweaters and other knitted items and woodcarvings, including troll dolls, are among the popular items to look for. Glassware is another Norwegian specialty. Karl Johansgate is Oslo's main street and its main shopping district.

Seafood is the star of most Norwegian menus, including fresh salmon, trout, cod and halibut. A great way to sample a variety of seafood is to try the popular fiskesuppe, a hearty fish soup. The open-faced sandwiches that are a lunchtime staple throughout Scandinavia are easy to find, as well. Norway is one of Europe’s most expensive countries, but Oslo restaurants like Grand Café, Deli de Luca and Kaffistova offer good value.

Oslo’s Viking Ship Museum displays two finely crafted vessels dating from the 9th and 10th centuries, along with ancient jewelry and other plunder the Vikings gathered during their notorious raids throughout Europe.

For amazing views of Oslo and the Oslofjord, head to the Holmenkollen Ski Museum, site of the 1952 Olympics. The museum traces the history of the sport, which originated in Norway, and also displays artifacts from Roald Amundsen’s trek to the South Pole.

June through August is the peak cruise season for Norway, a time when the weather is at its warmest and the days are nice and long. However, many cruises are available in May and September, times with brisker temperatures but often better values and less crowded ports. Even in mid-summer, temperatures are moderate, averaging in the 60s in ports like Oslo and Bergin. Dressing in layers is always advisable. 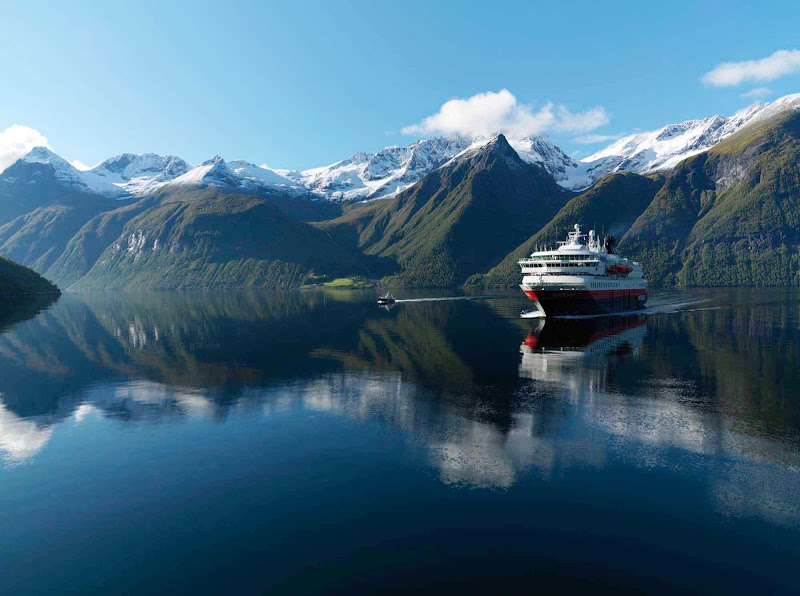 Erika Tiren / Courtesy of HurtigrutenHurtigruten's Nordnorge sailing during an autumn day along the Hjørundfjorden fjord in Norway.

In Oslo, most ships dock at two terminals at either side of the Akershus Fortress, a close walk to downtown and the waterfront area.

Central Oslo and the lively waterfront area are within walking distance of the piers. Taxis are widely available and the city also offers a subway and tram system that is fairly easy to navigate. There is also a hop-on, hop-off sightseeing bus that departs every 30 minutes from the ships. Ferry service from Pier 3 takes visitors out to the Bygdoy Peninsula where the Kon-Tiki Museum, Norwegian Folk Museum and Viking Ship Museum are located.

Documents: U.S. and Canadian citizens will need a valid passport

Safety: Norway has a relatively low level of crime as compared to the U.S. and Western European countries, according to the U.S. State Department, but it notes that pick-pocketing and petty theft are common in major tourist areas.

Have you visited Norway? What was the highlight for you? Have any tips for newcomers? Would love to see your photos and hear about your experience.

“Remember, when you make a purchase of 315 kroner or more, you can get the 25% tax refunded when you leave the country if you hang on to the paperwork.”

“All but one of the original stave churches, medieval Scandinavian wooden churches using the post and lintel technique, surviving to this day are found in Norway. The other one is in Sweden. There are about 30 of them, built mostly in the 12th and 13th centuries.”