Melbourne is Australia's second-largest city, trailing only Sydney, with more than 3 million people residents. Lively and cosmopolitan, Melbourne offers everything most visitors want in a city destination: great shopping, nightlife, entertainment and culture all in a fairly condensed urban package. Located on the southeast coast of Australia in the state of Victoria, Melbourne has long been a center for performing and visual arts. It's also one of the primary financial centers of the Asia-Pacific region.

The city is laid out in a large rectangle, filled with a maze of hidden lanes where visitors can discover bars, restaurants and chic boutiques. Melbourne is made up of precincts, distinct enclaves with their own flavor. Part of the fun is just wandering around to see what lies around the next corner.

Dynamic and diverse, Melbourne has more than enough activities and attractions to keep cruise passengers happily busy while in port.

Cruise ships that call on Melbourne 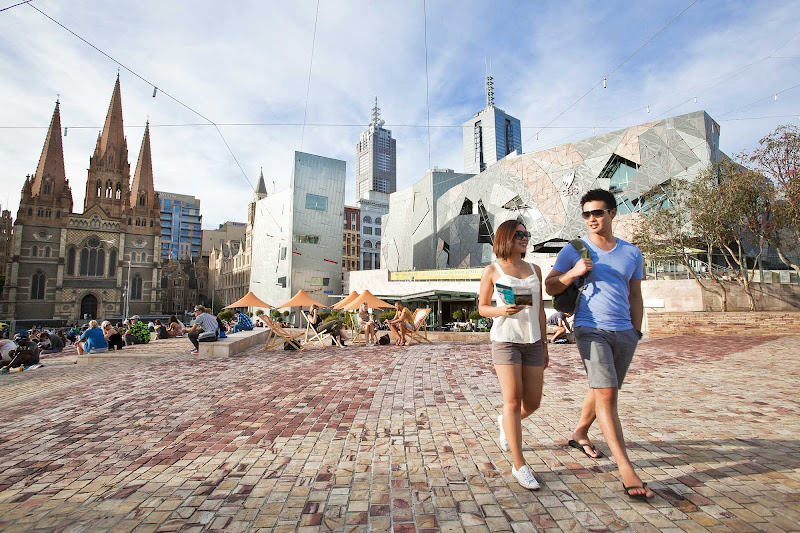 Top things to do & see in Melbourne

Federation Square is the city’s landmark cultural and entertainment center and a must-see, if only to enjoy its bold design. More than 2,000 events take place here each year, including cultural festivals, exhibitions, performances, films, concerts and fashion shows. It is home to a slew of art galleries and worthy places to eat and drink.

Melbourne's boom had its roots in the gold rushes of the 19th century, when gold was found in the city's surrounding hills. The Ballarat and Bendigo rushes fueled Melbourne's rise to prominence, as people from all over the world arrived in hopes of finding a fortune. In recent years, another wave of immigration has transformed the city into an international hub.

To get a feel for the city's center, hop on the City Circle Tram. The burgundy trams are free and stop at points of interest across downtown Melbourne. Another option is City Explorer, a guided double-decker bus that stops at every major tourist destination in the city. A day pass allows riders to get on and off the bus as many times as they like. Melbourne River Cruises offers tours of the city on the Yarra River.

Among the city's top attractions is the Royal Melbourne Zoo. The world's third oldest zoo, it has been around since 1861. More than 3,000 animal species can be found here, including all of the Aussie favorites. The butterfly house is well worth a stop.

Much of Melbourne's history revolves around the gold rushes that fueled its boom. This time period is chronicled at the Gold Treasury Museum. The city's top art gallery is The National Gallery of Victoria. While there are pieces by European artists, including Rembrandt and Picasso, the gallery's best exhibit features Aboriginal artwork. 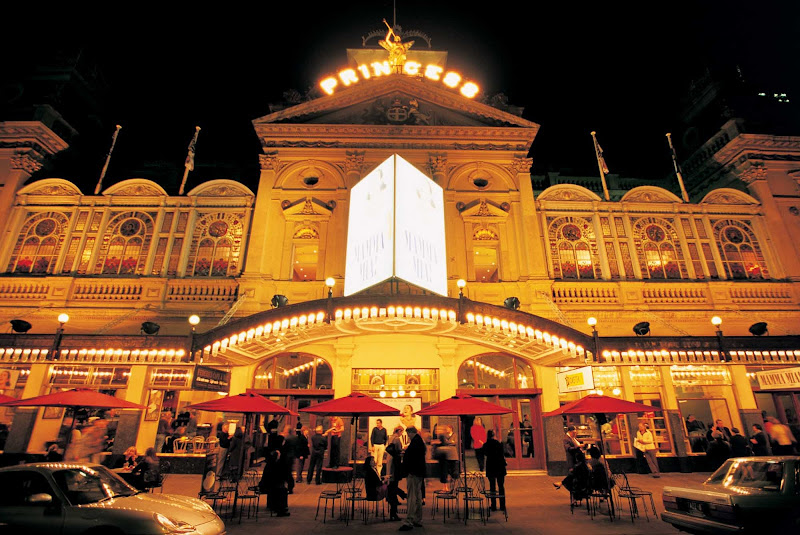 Tim Webster / Courtesy of Tourism VictoriaPeople outside the Princess Theatre on Spring Street in Melbourne, Australia.

Outdoor lovers are drawn to the Royal Botanic Gardens. Over 100 acres and 1,200 species of flora are on display here. Visitors can also learn more about Australia's Aboriginal culture on the Aboriginal Heritage Walk.

The people of Melbourne are crazy for sports, both as participants and spectators. The city has lots of bike paths, tennis courts and golf courses, for example. But for visitors who would rather see than do, there are multiple options.

The Australian Open — the first of four Grand Slam events of the year — takes place every January (midsummer!) at the Melbourne Park National Tennis Center on Batman Avenue in Melbourne. If you want to attend you may want to buy tickets in advance.

Equine enthusiasts in town in November should try and see the Melbourne Cup, Australia's most prestigious horse race.

Australian Rules Football is played from March through September. You may not understand all of the rules, but you can have a great time trying to figure them out. The game is played at Waverly Park on Wellington Road or at the famous Melbourne Cricket Ground on Brunton Avenue. Melbourne Cricket Ground was the main venue for the 1956 Olympic Games and holds over 97,000 people for cricket matches, Australia's national pastime. Tickets are available at the gate for most matches.

Shopping is not just something to do in Melbourne, it is a part of the core vibe of the city. Melbourne's shopping scene easily outclasses the rest of Australia, and there's enough shopping to last an entire day (or more).

The Queen Victoria Market is bounded by Peel, Victoria, Elizabeth and Therry Streets, just north of downtown. This is Australia's version of a bazaar, with hundreds of small stalls and shops selling an eclectic array of items. The Queen Victoria Markets are so large that there are tours available to help shoppers navigate their way through the multitude of shops.

Designer labels can be found on Chapel Street in Prahan or in the historic Melbourne General Post Office, which covers an entire city block. Visitors can go funky on Brunswick Street and grab a real bargain at the Rose Street Artist’s Market.  For those who truly want to shop 'til they drop, Shopping Spree Tours offers dedicated outings.

Melbourne's dining scene is diverse, a reflection of its population. On offer is Chinese food that rivals the best of Beijing, Italian dishes that recall the fine foods of Florence and, of course, indigenous Australian selections, and that's just the start.

From its famed coffee and old-world cafés, to top restaurants, such as Nobu, Botanical and Becco, the city is full of choices for food and drink. Melbourne's culinary renaissance centers on creations by top chefs at such restaurants as Cutler & Co., Attica and Vue de Monde.

Flower Drum serves a succulent Peking duck, along with other Chinese favorites. Grossi Florentino offers elegant Italian dining in a beautiful setting, and Tho Tho is considered one of the best Vietnamese restaurant in town.

Staying in town for the evening? No worries, mate — Melbourne's after-hours scene offers lots of choices. The city is home to the fabulous Australian Ballet. Theater lovers will want to catch a show at the Victorian Arts Centre  or The Princess Theatre.

Only a few cities in the world allow adventurers to fly over them in a hot air balloon and Melbourne is one. Most flights take place in the early morning hours when the air is calm, meaning balloons offer not just views of the city, but views of the city just as the sun rises over it. If you're saving for one spectacular adventure in Melbourne, this is an excellent choice.

Philip Island and the parade of the world's smallest penguins as they make their way to their burrows after spending the day at sea.

Melbourne is a year-round destination, though winter from June to August can get chilly. 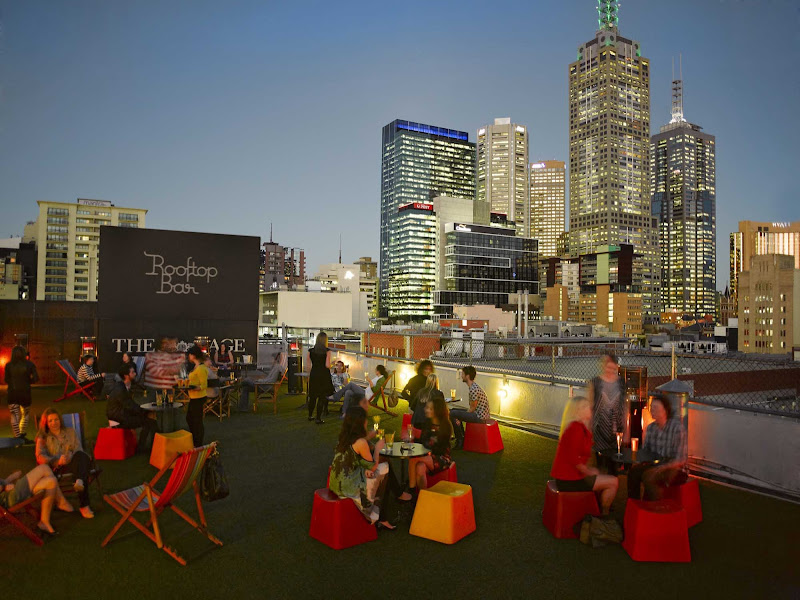 Robyn Lea / Courtesy of Brand VictoriaPeople enjoy drinks at the Rooftop Bar & Cinema at Curtin House at twilight in Melbourne.

Cruise ships dock at the Port of Melbourne. A tram links the port with the city center, located about two miles away.

Melbourne is home to the oldest tram system in the world. It may be old, but it's still highly effective. Buses and trains also do a very good job of getting visitors around town. Taxis are available as well.

Documents: All travelers, other than Australian and New Zealand citizens, need a valid passport, valid visa and completed and signed Incoming Passenger Card.

Language: English with a charming accent

Tipping: Tipping is still a debated topic in Australia. Visitors from tipping cultures, such as the United States, have brought the practice there, particularly in Sydney and Melbourne and areas with lots of tourists, but tipping has not historically been part of the culture. There's no hard and fast rule; however, 10% for good service in high-end restaurants should be fine. That amount should work for taxi drivers as well.

Safety: For a large city, Melbourne is remarkably safe. That said, like any city Melbourne has pickpocketing and other petty crimes, and it's not uncommon to find rowdy and drunk crowds around bars and clubs late at night. It's always best to leave valuables on the ship and to refrain from showing large amounts of cash while shopping and touring.

Have you been to Melbourne? Please share a story, tip or discovery. What was the highlight?