Jerusalem travel guide: What to do & see

Jerusalem conjures up strong emotions and special feelings for people all over the world, and has for thousands of years. Millions of people have engaged in historic battles over the city throughout the millennia, and even today, Jerusalem's ultimate fate is at the center of unrest in the Middle East. But amid all of the turmoil, you will find a destination unmatched for its combination of natural beauty, climate, history, attractions, and meaning.

Jerusalem is the capital city of Israel and one of the oldest and culturally significant cities in the world. Jerusalem’s history dates back to the 4th millennium B.C. and is considered a holy land and spiritual center for Judaism, Christianity and the Islam. Although it is considered to be an epicenter for spiritual pilgrimages and known for its religious significance, Jerusalem is also home to a plethora of cultural venues and a thriving arts scene. Whether visiting Jerusalem to capture a piece of history, eat falafel, climb Mount Zion or hit the downtown club scene, there is something fun and intriguing here for every traveler.

Cruise ships that call on Jerusalem 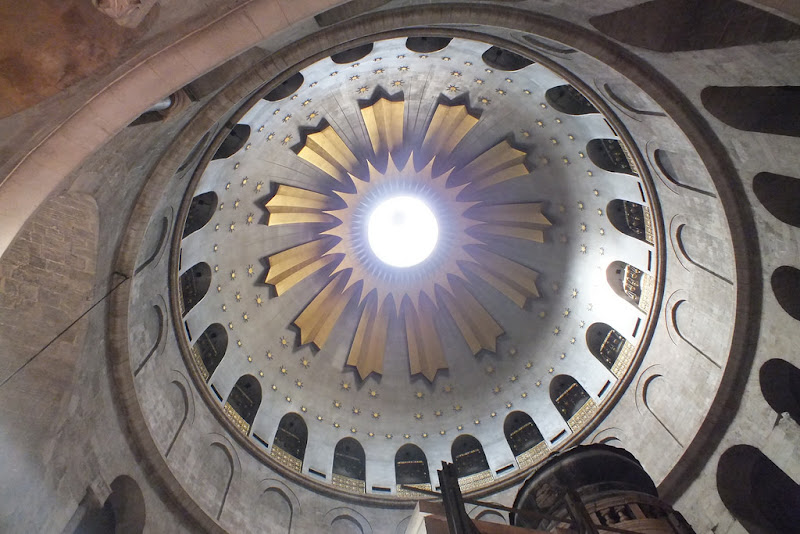 Israel Ministry of Tourism One of two domes in the Basilica of the Holy Sepulchre, or the Church of the Resurrection in Jerusalem.

Top things to do & see in Jerusalem

Jerusalem may seem like two cities: The Old City, which is home to all the major religious sites and is divided into four quarters (Jewish, Christian, Arab and Armenian), and the New City, which is home to the majority of Jerusalem's people and is much more modern. Both are worth visiting and have their own attractions. The Tourist Information Office (Jaffa Gate, 02-627-1422) sells maps and brochures of Jerusalem, which are essential for knowing your way around the city, and for budgeting your limited time effectively.

For visitors in the Old City, modest dress is mandatory if you want to visit any of the religious sites.

The holiest site in Judaism. Jews from around the world come to pray at the Wall, the only remnant of the Second Temple, which was destroyed almost two thousand years ago. It's customary for all faiths to write prayers on slips of paper and place them in the crevices. People of all religions are welcome to pray at the Wall, but men must wear a hat or yarmulke, provided free of charge.

Known in Arabic as Haram ash-Sharif and most notable for its golden dome, this location features the Al Aqsa Mosque and Dome of the Rock, which is considered to be a holy site in Islam. It is said that Mohammed was transported to Mecca from here in the Night Journey. It is open to non-Muslims at selected hours; however, given recent tensions, it is important to talk to your local guides to make sure your safety isn't compromised.

The Church of the Holy Sepulchre

One of most important sites in Christianity, it is said that this church is where Jesus was crucified, but is also known for its breathtaking artwork. The church is divided among the six oldest sects of Christianity, and inside the church is the Stone of Unction, where the body of Jesus was prepared for burial. The marble tomb edifice was constructed in the 1800s to enclose the cave of the sepulcher.

At 45 acres, Yad Vashem's museum and research center for the Holocaust is visited by millions throughout the world. Located in the hills overlooking Jerusalem, it features both outdoor memorials as well as artifacts from the time period. However, be prepared for an incredibly emotional experience while going through the museum.

Founded in 1965 outside of the Old City, the Israel Museum is best known for featuring the Dead Sea Scrolls, which were written between 150 and 70 B.C. However, it also features a substantive art collection as well as a variety of other antiquities and historical writings. 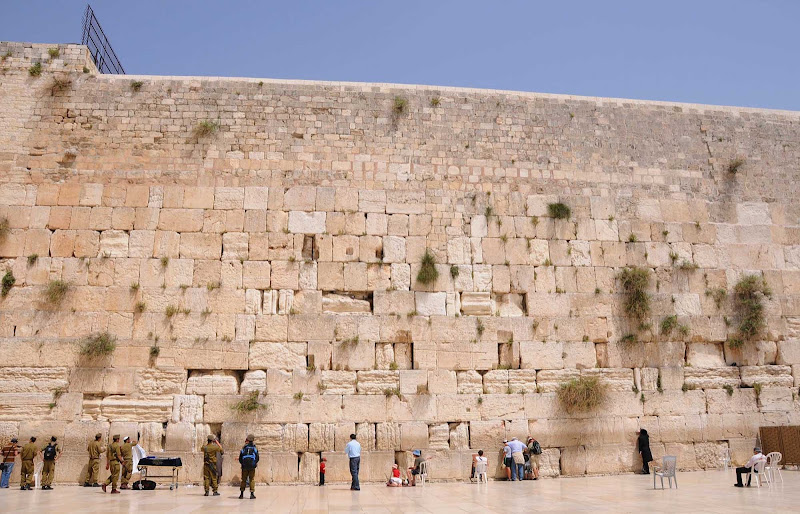 JD Lasica / Special to CruiseableIsraeli soldiers, Israelis and visitors mingle and pray at the Western Wall in Old Jerusalem.

In the Old City, there are lots of little shops, many with no signs or telephone numbers. Depending on which quarter you find yourself in, you will be surrounded by Christmas ornaments, hand-carved camels, jewelry, and much more.

Be prepared to haggle in most stores you visit, both in the Old City and outside of it. Bargaining is an art form in Israel, whether for a taxi ride or a piece of jewelry. The shopkeepers can be strong-willed, and if you are intimidated, you will not get the best price. But if you hold your ground, you can find some great deals. Most of the time, they need to sell it more than you need to buy it.

Almost every type of food is available in Jerusalem, both inside and outside of the Old City. However, Middle Eastern foods are the specialty, so falafel, shwarma, pita and hummus are your best bets. These are available from both sit-down restaurants and sidewalk cafes. Also be prepared to try a variety of salads, from roasted beet salad to Israeli salad (chopped tomatoes and cucumbers with lemon juice and parsley). The latter is so popular it is also served with breakfast.

The marketplace also features a variety of foods, from salty cheeses and olives to piles of fresh fruits and vegetables. Be sure to try a bureka, or a flaky pastry filled with either potato, spinach or cheese. However, make sure to avoid it on Fridays, as patrons are usually busy getting food for the impending Sabbath. And on Saturday, most restaurants and markets are closed until the evening.

Although the summer months are very hot in Jerusalem, it is usually the peak of tourist season. Winter can be a great time to visit if you want cooler temperatures, but the weather conditions can be unpredictable; in recent years, the city has even seen snow. 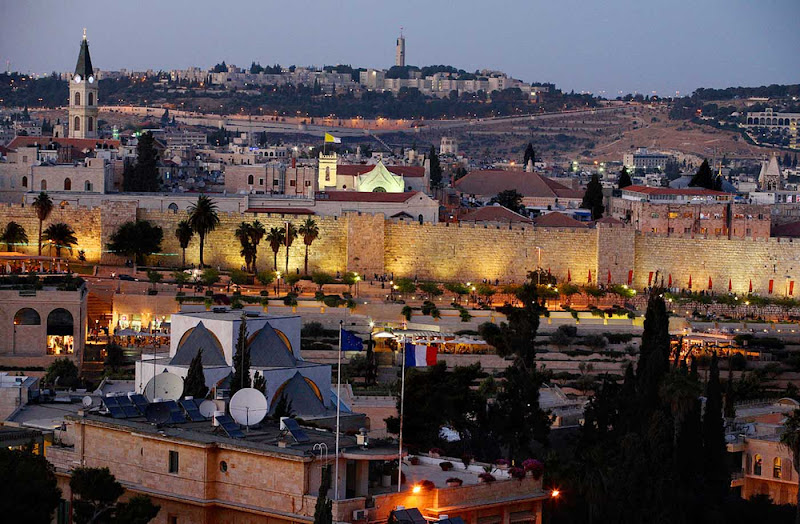 Cruise ships dock at the Port of Ashdod. Buses are available to transport you from Ashdod to Jerusalem, which takes about 45 minutes.

Buses are everywhere, and most of the attractions here are easily accessible. There are many different bus routes around Jerusalem and the numbers may get confusing. But most people speak English, and you are sure to find someone who will be happy to point you in the right direction. Light rail is also available in the newer parts of the city and is very easy to navigate.

Sheruts are small passenger vans that travel along the same route as buses. They are slightly more expensive than buses, but they are more convenient. Taxis are usually pretty easy to spot, but just like in the shops, you may need to haggle for fares. Just head over to a major hotel and you will have no problem finding a cab.

In the Old City, foot travel is probably your best bet. There is a lot to see in a very compact area, so you'll find that walking is the easiest way to get around.

Passports: U.S. and Canadian passengers need a passport. If you plan on traveling further through the Middle East, make sure precautions are taken so that your passport isn't stamped.

Language: Hebrew is the main language spoken, but most residents speak English as well.

Safety: Due to terrorism threats, be prepared to be questioned upon entering Israel. Although Jerusalem security is generally high, due to political volatility, precautions must be taken while traveling through certain areas of the city, particularly East Jerusalem.

How about you? Have you been to Jerusalem, or planning to go? We'd love to hear about your experience.