Crete travel guide: What to do & see

More like a separate country than just another Greek island, Crete casts a spell with its untamed landscapes and ancient sites shrouded in legend.

Cruise visitors will discover an island of ancient treasures, ruggedly beautiful mountain and coastal scenery and the lively port of Heraklion with its outdoor markets, sidewalk cafes and fortified walls built by Venetian occupiers many centuries ago. Chania, Crete's second-largest city, is one of the most picturesque ports of the island. It's lined with coffee shops and restaurants frequented not only by tourists but also by locals who on cool summer evenings stroll up and down. On a walk from port along Chalidon Street, visitors can see the city's famous ancient lighthouse among other landmarks.

While Heraklion and Chania are reason enough to visit, a day trip to wild and rugged Samaria Gorge, the longest gorge in Europe at nearly 10 miles, is well worth considering. The hike through the gorge is an adventure offering dramatic mountain scenery and a photo-op finish at a village set along the turquoise sea.

Cruise lines that call on Crete 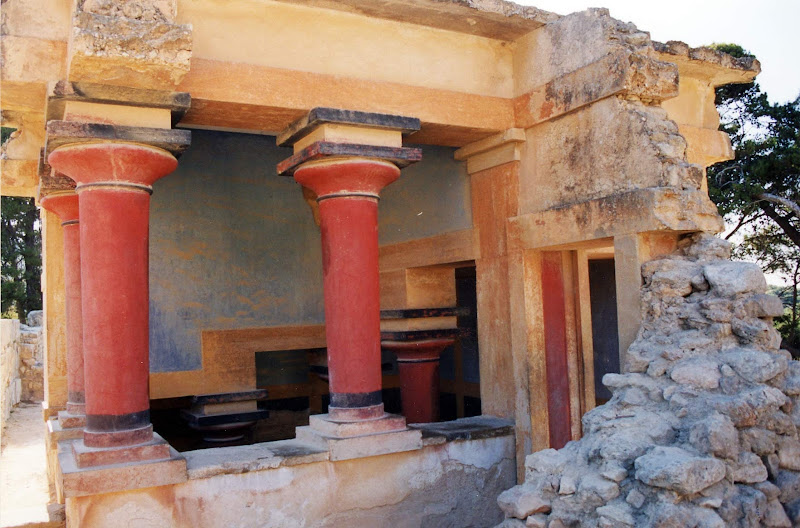 JD Lasica / Special to CruiseableA building at the Palace of Knossos in Crete. The archaeological site dates to the Bronze Age and is considered Europe's oldest city.

Located about three miles south of Heraklion, the renowned archaeological site Knossos Palace is the 4,000-year-old domain of King Minos and the minotaur, a beast with the head of a bull who is said to have lived in a maze beneath the palace. The heavily restored throne room, grand staircase and other sites are a window onto the ancient Minoan civilization.

One of the best museums in all of Greece is the Heraklion Archaeological Museum,  filled with antiquities from what is believed to be Europe's oldest civilization. Artifacts include frescoes and statuary from Knossos Palace as well as jewelry, drinking vessels and the Phaestos Disc, an ancient tablet covered with a mysterious script.

The 16th-century Venetian Walls surrounding Heraklion were built by the Venetian occupiers of the island as protection against pirates from the Barbary Coast. The tomb of Nikos Kazantzakis, author of Zorba the Greek, lies at the southern juncture of the walls.

The central hub of Heraklion, Eleftherias Square, is paved with marble and dotted with fountains. It  leads onto Daidalou, a pedestrian thoroughfare lined with shops and tavernas.

Brilliantly colored textiles, ancient Christian and Byzantine sculptures and several paintings by El Greco, who was born on Crete, are highlights of the Historical Museum of Crete, housed in an imposing mansion. It’s a great way to get an overview of the unique culture and history of the island.

Convenient Heraklion beaches include the popular (and often crowded) Amoudara Beach, which is near hotels, restaurants and other services. Choices also include Paleokastro, a secluded beach close to important Minoan ruins, and Agia Pelagia, a favorite among scuba divers. 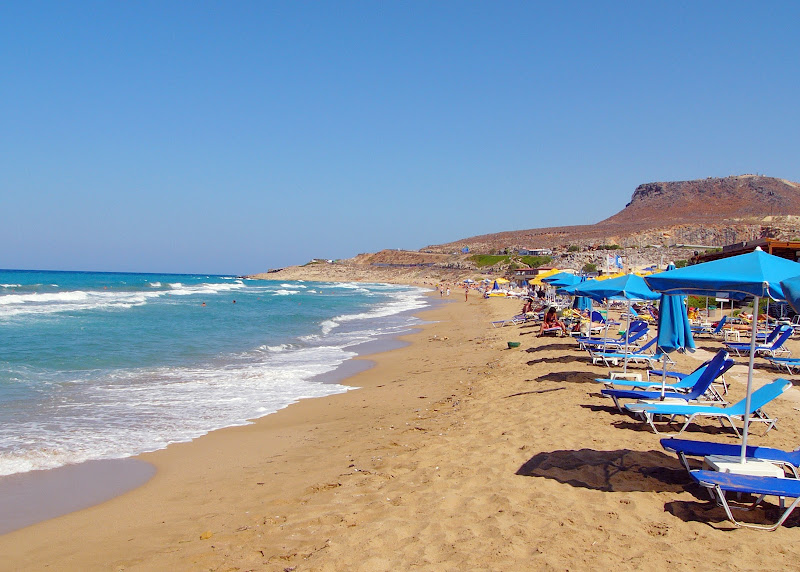 Hand-woven and embroidered textiles, silver and gold jewelry, local olive oil, honey and dried mountain herbs (especially oregano) are among the good buys to be had. A specialty of Crete are reproductions of the Phaestos Disc, an ancient tablet in the Archaeological Museum, often depicted on jewelry.

The 50-acre Acqua Plus Water Park, next to the Crete Golf Club, will delight children with its slides, pools and arcades.

Samaria Gorge, a national park, is a popular day trip from Chania and an extraordinary adventure. The gorge, which starts at an altitude of over 4,000 feet and ends at the sea, is about 492 feet at its widest point and less than 10 at its narrowest. Be sure to wear good quality walking shoes or hiking boots on the five- to seven-hour hike; tourists trying to cross the gorge in flip-flops end up walking barefoot and in pain. Keep an eye out for the endangered Cretan wild goat, and have your camera at the ready: the sea at Agia Roumeli, the village at the end of the gorge, is a dazzling turquoise.

Take a drive or guided tour to the upland plains known as the Lassithi Plateau, about 2,800 feet above sea level and lined with windmills, almond orchards and small villages where you can browse for local weavings and embroidery. Shoulder season: May to June, September to October

Summer brings hot, dry weather and by far the most crowds. Spring, especially May, is when wildflowers bloom across the island. Fall brings golden light and balmy weather, with the sea still warm enough for swimming. Winter, especially January and February, can be rainy.

Cruise ships dock in Heraklion Harbor, a short walk or taxi ride from the main tourist sites in the city.

Heraklion and its attractions are easily explored on foot. Taxis are plentiful, but make sure to agree with the driver on the fare beforehand, as sometimes surcharges are added. If you choose to explore the island on your own, a rental car is the best bet.

Safety: Heraklion is considered a safe city overall. As always, be aware of your surroundings and lock up your valuables. Especially in large tourist areas, keep your wallets and purses close and beware of pickpockets.

Have you been to Crete? What was the highlight? Have any tips? I'd love to know!

“Heraklion is not without its charms. A walk down Dedalou and the other pedestrian-only streets provides plenty of amusements, and the city has more than its share of outdoor cafes where you can sit and watch life unfold.”

“The quintessential public eating house of Greece is the taverna. This is what amounts to an extension of the Greek home table, offered forth to the community.”