As Lonely Planet puts it: "Corsica resembles a miniature continent, with astounding geographical diversity. Within half an hour, the landscape morphs from glittering bays, glitzy coastal cities and fabulous beaches to sawtooth peaks, breathtaking valleys, dense forests and enigmatic hilltop villages. Holidays in Corsica will therefore be incredibly varied: from hiking and canyoning to working your tan, enjoying a leisurely cruise, delving into the island’s rich history and sampling local specialities."

While officially part of France for more than 200 years, the island varies from the mainland in cuisine, customs and language. Ask a Corsican about their culture and you'll hear about the island's holy trilogy of food, wine and local music.

Cruise ships that call on Corsica

Tops things to do & see in Corsica

Corsica's main port and largest town, Ajaccio, accounts for about 70% of all cruise ship visits. The remaining visits are split between Bonifacio (with its towering citadel and buzzing waterfront cafes), Porto-Vecchio (with its yacht-filled harbor) and Propriano. As a result, Ajaccio is the third leading port in France in terms of cruises, behind Marseille and Nice.

If you have entire day or more, Corsica is a beautiful place to scout around if you have wheels. The island's interior consists of stony mountains carpeted in macchia, a low, thick chaparral made up of aromatic Corsican mint, rock roses and myrtle. Everywhere you'll discover traces of the island's long and colorful history, from medieval walled towns to seaside villages guarded by 16th-century towers. At 3,400 square miles, Corsica is about two-thirds the size of Connecticut.

Under the southern walls of the Citadel in Ajaccio, you'll find a pretty little beach called St. Francois. It's a good place for swimming in the cool Med waters and to relax on the white, pebbly sand on a sunny day. You'll also find diving, boating and windsurfing nearby.

Napoleon was born on Corsica, and Palais Fesch (50 rue Fesch) is the imperial Chapel house that serves as his mausoleum. The Fesch Museum, in the palace's first floor, offers a permanent exhibit of more than 1,000 Italian paintings from the 1300s to 1800s, including Renaissance paintings from Botticelli, Titian, Raphael and Bellini. It was created by Napoleon I’s step-uncle, cardinal Joseph Fesch, who used his position to buy hundreds of paintings, some looted by the army in Italy and Holland.

At Place Foch, the city square in the center of old town, you'll find a stately marble statue of Napoleon atop a fountain of four lions. Just steps away, in Ajaccio's market, you can browse vendor stalls offering local delicacies and products. 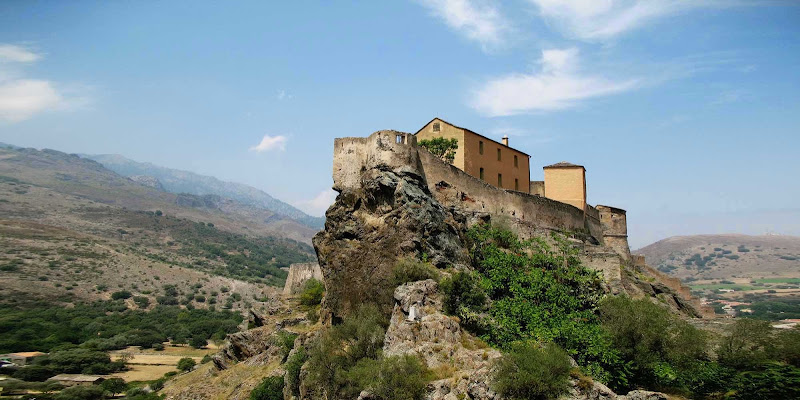 Dino Olivieri / Creative Commons BYCitadelle de Corte (The Fortress of Corte), in the historic capital of Corsica. Corte is the only fortress in the interior of the island.

If you can spare the time (or if your ship docks there), it's worth spending time in Calvi, an upscale village on the island's northwest coast. You'll encounter plenty of shops, galleries and restaurants along its cobblestone streets. Calvi gives off the vibe of a French Riviera resort, with its mega-yachts bobbing in the harbor and upper-end brasseries and cafes while nearby battlements provide reminders of its past as a stronghold for nearby Genoa.

Elsewhere, you can stroll in the countryside or hike in the mountains — Corsica offers more than 100 peaks and scenic trails. Or drive the island's curvy mountain roads along the scenic turquoise coast and stop at any of the more than 350 villages, many with chapels, towers and fields of grazing goats.

On the coastal road toward Piana, Calanches is a UNESCO World Heritage Site featuring an otherworldly landscape of dramatic, weather-carved, red granite rock formations spiraling down to the sea. Cruisers can also enjoy kayaking, aqua hikes (in a river) or tours to Lake Tolla, the Prunelli Gorges, Ocana and Tolla villages and Bastelicaccia for gardens and orchards.

Throughout Corsica you'll find a cuisine informed by French and Italian influences, with the rich flavors of honey, chestnuts, wine and local cheeses. Ajaccio is packed with restaurants. You might sample prisuttu (dry cured ham) or taste artisan cheeses.

The best time to visit is spring or fall. Corsica can get pretty hot in the summer. Average temperatures in Ajaccio range from a low of 46°F ( 8°C) in January to 82°F (28°C) in July with a just-right 69° F (21° C) in May and October. Note that the climate varies, with the North hotter than the South and the East iwetter than the West. July and August are peak tourist times in Corsica.

Ships dock chiefly in Ajaccio port, a short walk from the town of Ajaccio. Cafés and shops can be found immediately outside the port gates.

By far the best way to explore Corsica is by renting a car, though note that car hire and fuel can add up quickly.

Language: French is the official language of Corsica. Many Corsicans, especially in tourist areas, can speak or at least understand English.

Currency: The euro. Be aware that many restaurants and shops in Corsica don’t accept plastic for amounts under 15 euros. ATMs are scarce in rural areas.

Safety: Corsica is considered a very safe place for visitors. Be polite and respectful, and take the usual precautions.

Want to go there?

Contact a Cruiseable travel advocate to travel to Corsica by ship or by air. We'll find you the best bargains — at no cost to you.

How about you? Have you been to Aruba? Have any tips for visitors? We'd love to hear about your experience.

“Take a drive to Calvi. The charming city is located on the northwest coast of Corsica. Down the small town’s cobblestone streets, visitors will find plenty of restaurants, shops, and art galleries.”

“We had an excellent lunch of charcuterie, zucchini beignets and wild boar at the beautifully rustic restaurant U Taravu in Zévaco, a village next to Corrano. ... La Source in Olmeto serves delicious wood-fire pizza. For local charcuterie and cheeses, visit La Cave Sartenaisein Sartène.”