The Canary Islands, a beautiful Spanish archipelago just off the northwest coast of mainland Africa, have been an exquisite getaway for cruisers in the know for some time. The islands are subtropical, and even the winter months are relatively mild, offering travelers virtually perfect weather year-round. The Canaries are especially popular with British and Northern European cruise passengers, and several cruise ships visit on a regular basis, usually calling on Portugal's Madeira and Lisbon on the way to and from the United Kingdom.

By far, the most popular islands are Tenerife, Gran Canaria and Lanzarote, with a collective 12 million visitors each year. Thanks to the warm climate, the Canary Islands offer countless outdoor activities. Explore incredible natural volcanic landscapes in true adventurer style, let your hair down at an adrenaline-filled waterpark or spend a quiet, relaxing day at the beach.

Cruise ships that call on the Canaries 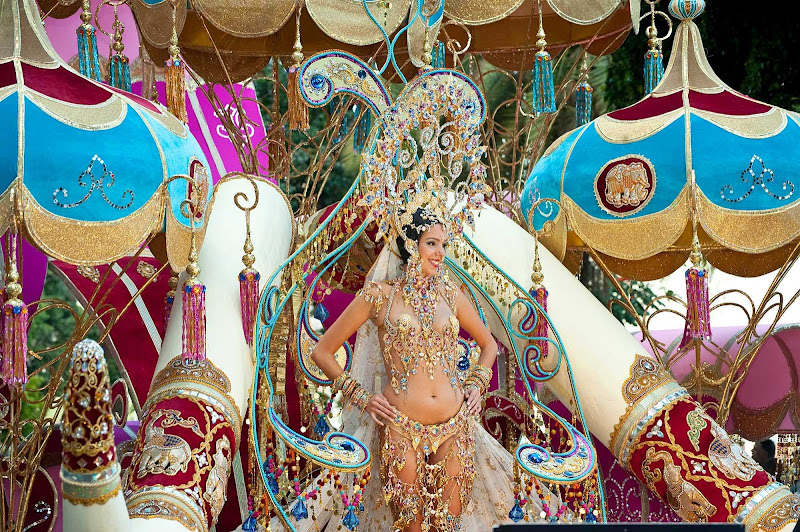 Javier Betancor / Courtesy of Tourist Office of SpainAn elaborately costumed performer at the Carnival of Santa Cruz de Tenerife in the Canary Islands, held each February.

Top things to do & see in the Canary Islands

The biggest attraction on Lanzarote is the Timanfaya National Park, on the southwestern part of the island. The park is made entirely of volcanic soil and is still very much an active volcano, stretching from the "Fire Mountains" to the sea. The craters are dormant, but the vents at Isolte de Hilario still emit superheated air: 752°F to be precise! Local guides will demonstrate Mother Nature's power by pouring water down the small vents, which is instantly superheated and explodes back out just a few seconds later. The park can be explored via coach, camel (yes, camel) or on foot. Don’t forget to check out the barbecue at the main park office. The heat is all natural, and if you're lucky there may be some meat and potatoes cooking that guests are invited to enjoy. 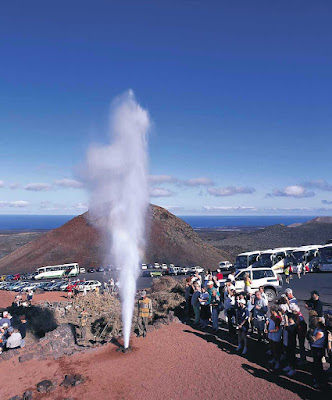 Courtesy of Tourist Office of SpainA geyser shoots off at Parque Nacional de Timanfaya in Tinajo on the island of Lanzarote in Las Palmas province.

Located on the circular island of Gran Canaria, Las Palmas is one of three distinct areas that exist in this region. Home to 370,000 inhabitants, Las Palmas serves as the capital as well as a shipping port and a thriving, fast-paced business center. The south coast is completely different, with glorious white-sand beaches that stretch for miles.

Las Palmas is the largest and most active city in all of the Canary Islands. A multicultural and diverse region, tourists, sailors, shoppers, and heavy traffic make it an incredibly bustling port city. The city is lined on one side with docks that house huge container ships. On the other side, four-and-a-half mile long Canteras Beach stretches down the shore.

Las Palmas connects two waterfronts of the Gran Canaria Peninsula that stretch for six miles. The northern end of the peninsula is the portion, which sees the most action. However, the southern end is where the majority of noteworthy and interesting sights are located. Plaza Santa Ana is a great place to start your tour of Las Palmas. The bronze dog statues in the plaza are intriguing and have an interesting history. Ancient explorers found a rare breed of dog on Grand Canaria Island, and they named the island after these dogs, not after the yellow songbird, as one might assume. This particular breed of pooch is named Canum in Latin, hence the name Canary. Fun fact: Years later the aforementioned birds were, in fact, named after the island.

One of the most popular tourist destinations on Gran Canaria is the Dunes of Maspalomas. The beach itself is isolated and dominated by shifting dunes. Aside from this wonderful natural phenomenon, the area is also known for its old lighthouse, built during the latter part of the 19th century and is worth a visit for its historical significance.

Teide National Park in Tenerife, national park since 1954 and a UNESCO World Heritage Site since 2007, is the largest national park in Spain. It features the Teide-Pico Viejo stratovolcano, which rises 12,198 feet above sea level and is often said to have a surface similar to that of Mars.

Safety: The Canary Islands are considered safe for visitors, but exercise good judgment by not flashing around valuables. 112 is the emergency number used by locals.

Have you been to the Canary Islands? What was your experience like? Have any tips for first-time visitors?

“One of artist/architect Cesar Manrique's most interesting creations is a restaurant, El Diablo, at the top of the active volcano, Mount Timanfaya, on Lanzarote. There Manrique designed the kitchen's barbecue to be heated from the heat of the lava bubbling below the surface.”