Budapest travel guide: The pearl of the Danube

As you enter vibrant and historic Budapest, it's only natural that your thoughts turn to Cold War intrigue, beautiful music and delicious wine. The towns of Buda and Pest, split by the Danube River but connected by eight magnificent bridges, combine to make one of Eastern Europe’s most striking cities. Budapest's evocative natural setting gave rise to its nickname, Pearl of the Danube. The city's culture, history and abundance of good food and wine elicited another nickname, Paris of the East.

From Roman times to the present, Budapest has been an important cultural and commercial crossroad. Spies have haunted its streets gathering secrets, and the music of Liszt and Bartok — Hungary's greatest composers — is known the world over. In 1987, Budapest was added to the list of UNESCO World Heritage Sites for the banks of the Danube, the Buda Castle Quarter and Andrassy Avenue. Today, most historic buildings enjoy protected status, preserving centuries-old charm.

Budapest is one of the romantic cities in all of Europe and to visit without seeing its buildings and bridges illuminated in the evening is to miss the city at its most magical. Stroll along the Danube or stand on the deck of your ship. The Chain Bridge, its lights reflected in the water and the glowing city and monuments behind it, is one of Budapest's most evocative sights. 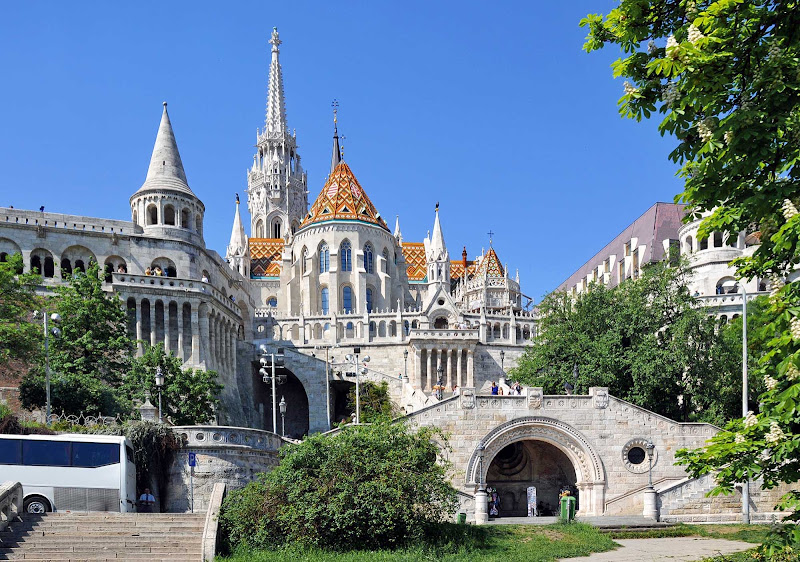 Walking around Budapest is a treat, from centuries-old cultural landmarks to thermal baths and majestic caves.

A walk through Városliget City Park starts at the Millennium Monument in Heroes’ Square. A World Heritage Site, it’s one of the most visited monuments in Budapest. Then ascend Castle Hill, up narrow streets and stone steps to the walls of the Royal Palace and historic and sumptuously decorated Matthias Church. Dating to the 13th century, the church contains a replica of St. Stephen's Crown.

The Vajdahunyad Castle, a massive complex originally built of cardboard and wood for the 1896 world Exposition, became so popular it was rebuilt in stone and brick. Touching the pen on the statue of the Hungarian chronicler Anonymus is said to bring good luck.

Visit Fisherman’s Bastion on a clear day for spectacular far-reaching views. Built in 1905 on the site of a medieval fish market, the white-stoned building abounds with turrets, parapets, curved staircases and other Disneyesque projections. For lighted city views, nighttime entrance is free.

Amble through popular Memento Park for an outstanding outdoor display of communist-era statues of Marx, Engels, Lenin and others. The statues were removed from Budapest after communism’s collapse and placed in the park to inspire visitors to ponder the differences between dictatorship and democracy. 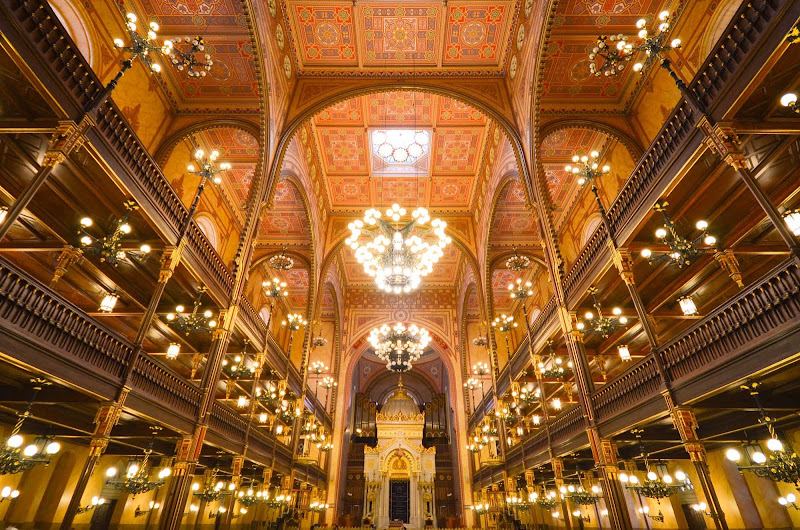 Budapest is rich in architecture. It is filled with beautiful squares, bridges and lush green parks. The buildings span architectural styles from the Renaissance to Art Nouveau.

Construction of St. Stephen's Basilica, named for Hungary’s first Christian king, took 50 years and several architects. The work of many well-known Hungarian sculptors and painters is displayed inside. Ride an elevator upstairs for panoramic views. Evening organ concerts are a treat for lovers of classical music.

One of the most recognizable buildings in Budapest is the neo-Gothic Hungarian Parliament, the largest building in Hungary as well as the oldest legislative building in Europe. Besides its standing as an architectural masterpiece, the Parliament is home to the Hungarian crown jewels, not to mention the half million precious stones and gold used to build it.

The Great Budapest Synagogue, also know as the Dohany Street Synagogue, is the largest in Europe and second largest in the world. Built between 1854 and 1859 in the Moorish Revival style, it stands 174 feet tall and has the capacity to hold nearly 3,000 people. The synagogue is also attached to a neighboring Jewish museum and cemetery.

Budapest also has a great deal of natural beauty. It is distinguished by natural thermal baths and hydrothermal caves with a labyrinth of beautiful stalactite formations.

Budapest is one of the world’s few cities where more than 100 caves can be found in the municipal area. Located in the Buda Hills on the eastern bank of the Danube, many of these majestic caves can be seen on guided tours and are a popular attraction for tourists and locals alike.

Hungary has been famous for horses and horsemanship for centuries. The vast grasslands of Puszta, Hungary’s great plain, are home to the country's powerful horses. Equestrian prowess is a national pride, and horsemanship exhibitions by Csikós wranglers should be part of any visit to this area.

A must-see is Pest’s Központi Vásárcsarnokmarket, the indoor Central Market Hall. As you explore the several levels of indoor shopping, look for Hungarian sausages, peasant embroidery, folk textiles and, of course, paprika, a Hungarian spice created by grinding red peppers into paste. Easy to pack for souvenirs and gifts, paprika is sold at seven levels of flavor, from sweet paprika for stews and goulash to fiery hot.

Follow the market with upscale shopping on nearby Váci Street, perhaps for some exquisite Herend porcelain, an elegant Hungarian treasure.

For a pricey but well-regarded meal, Sunday brunch at Gundel near Varosliget can be a good value. Trofea Grill's four locations are also highly regarded for their all-you-can-eat (and drink) buffets. For traditional Hungarian food and international dishes with a panoramic view, seek out one of the restaurant and bar boats on the Pest side of the Danube. 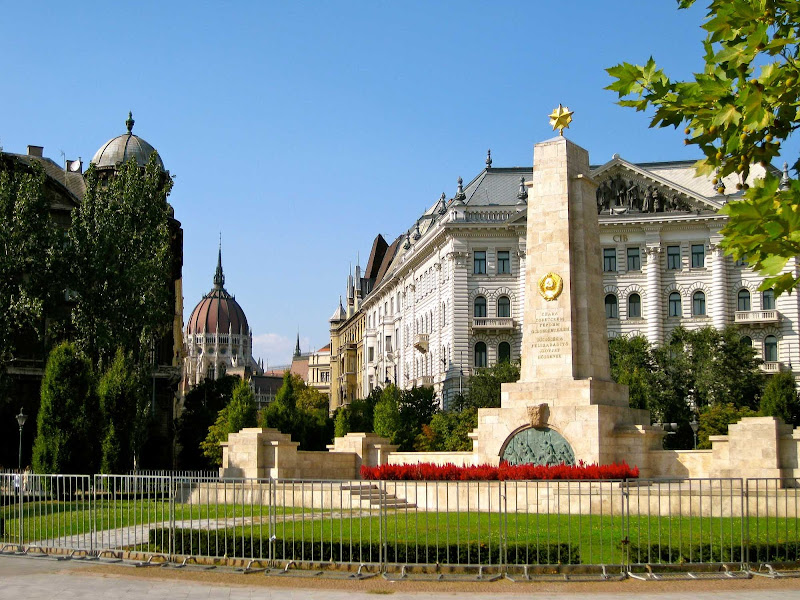 Documents: U.S. and Canadian citizens need a passport to fly in and out of Europe. Passengers on river cruises most likely do not need to carry their passport with them when on shore for the day, but check with your cruise line for its specific rules and requirements.

Tipping: Tipping is expected in Hungary for taxi drivers and servers in restaurants, typically 10%. Many restaurant owners keep tips, however, and don't pass them on to the servers. Giving cash directly to the server is the best way to ensure that he or she receives it. Not tipping is considered rude or the assumption is that the service was terrible.

Currency: The Hungarian Forint. Although Hungary is part of the European Union, it does not use the euro as its currency.

Safety: Pickpockets and purse snatchers are common in Budapest, especially in heavy tourist areas and on trains. The U.S. Embassy in Budapest has reported that passengers on river cruises, particularly older women, have been targets of these types of thieves in the sightseeing areas around the Danube. Several types of scams have also been reported, such as people on the street trying to get tourists to change money and men pretending to be police asking to see tourists' wallets. In both cases the tourists lose most or all of their money. For more on warnings that will keep you aware and prepared, go to the embassy's tourist advisory page at http://hungary.usembassy.gov/tourist_advisory.html

Have you been to Budapest? What was the highlight? We'd love to know!

“Sprawling across the banks of the Danube River, the city is really two towns in one. The west side is stately Buda, with its Castle Hill and remnants of Hungary's glory days. On the flats across the river is Pest, with prickly-spired buildings and the commercial town center.”

“Post-Iron Curtain Budapest has emerged as an animated metropolis. An appealing, youthful energy increasingly arises in the city, at new restaurants like Szimply and Margá Bisztro. Visitors can peruse Hungarian-made jewelry and quirky housewares at Velvet Chemistry and Szimpla Design Shop.”