Bergen travel guide: What to do & see

Bergen is a picturesque city in the western part of Norway. Bergen is a beautiful and diverse city with world-class museums — the Bergen Art Museum in particular is a real gem. The visual splendor of Bergen is remarkable, and you will never tire of this extraordinary city. The fjords are magnificent, including Sogne, the longest fjord in Norway, located just to the north of Bergen. Many of the old buildings in the heart of the city are charming, beautifully constructed and are just waiting to be explored.

The eating and shopping in Bergen are both excellent, as there are a number of high-quality restaurants and stores to peruse. The jewelry and clothing in Bergen shops are extremely nice, and in some locations you will discover great hard-to-find items. A combination of natural and man-made beauty makes the Hanseatic Wharf area one of the most spectacular port areas in the world. Wherever you go in Bergen, you are sure to be amazed, and the waterfront of the city is particularly impressive.

Cruise ships that call on Bergen 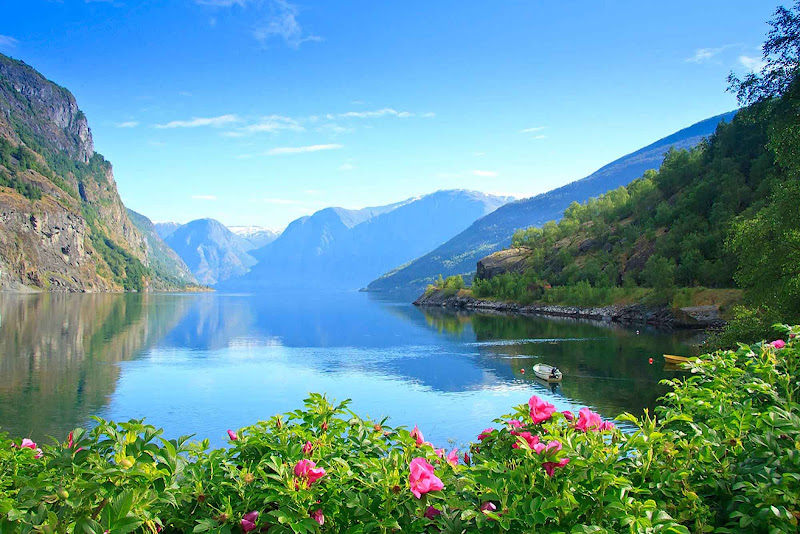 Top things to do & see in Bergen

The Bergen Art Museum is a fabulous collection of galleries that are full of exquisite paintings and artwork. The three primary galleries are the Stenersen Collection, the Rasmus Meyers Collection and the Bergen Billedgalleri. In the Rasmus Meyers are some of the best Picasso paintings found anywhere. Wonderful works by Miro and Braque can be seen here, as well. Paul Klee's glorious pieces are on display in the Stenersen Collection, and Norwegian greats such as Munch and I.C. Dahl are featured in the Bergen Billedgalleri. The Bergen Art Museum is a splendid establishment full of visual wonders, created by the masters.

The Bergen Aquarium can be found at Nordnesbakken 4 (55-55-71-71) and is a wonderful place for the whole family to enjoy. There are nine glass tanks that surround the indoor hallway, full of marine life that is sure to dazzle you. The 42 small aquariums are fantastic, as well, and being only a pleasant 15-minute walk from the heart of Bergen makes visiting the aquarium an absolute must. Among the thousands of animals and plants on display, you will see penguins, seals, piranhas and giant lobsters.

Troldhaugen was the home of composer Edvard Grieg. The ornate Victorian architecture is extraordinary. During the Bergen festival, the house is used as a gathering place, and Grieg's grand piano can be heard once again. Inside, Grieg's paintings, personal items and furniture remain. 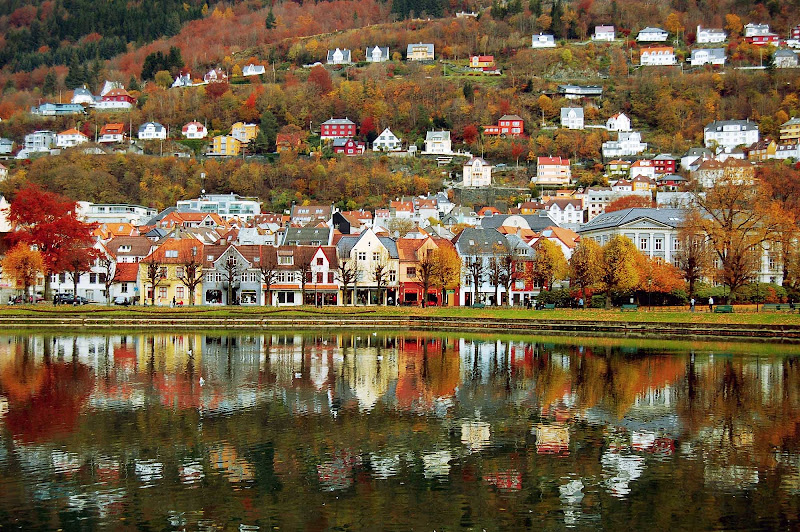 The Den Nationale Scene is located at Engen 1 (55-54-97-00) and is a fabulous theater constructed in the middle of the 19th century, which features performances that range from plays to opera. The Night Spot can be found inside the Hotel Norge and it is a lively dance bar with a great sound system and a slightly older and refined crowd.

For clothes and other merchandise, visit Sundt & Company at Torgalmenningen 14 (55-32-31-00). Galleriet is a great mall complex with over 70 stores.

Finnegaardsstuene serves extraordinary French and Norwegian cuisine. Construction of this great restaurant first began in 1400, and it was first used as a warehouse. Some of the woodwork on the present day establishment dates all the way back to the 1700s. There are four comfortable dining rooms, all of which are all elegant and inviting. The ambiance is wonderful, and the service is top notch. The menu matches the season to some degree, and the ingredients used in the majority of the dishes are distinctly Norwegian. However, the entrees are prepared in the classical French style. The combination is dynamite, and every morsel is wonderful. The turbot is splendid, marinated in lime and served with a caviar sauce. Duck breast with fig and lime sauce is heavenly, and the venison filets with berry sauce are divine. The desserts will never disappoint, especially the cloudberries with ice cream.

Wesselstuen is located at Engen 14 (55-55-49-49) and is designed to resemble an old 18th century tavern. The dinners are great, and this is where you will find the best steak in Bergen. The duck and catfish are also very good, and the fun décor can't be beat.

Fiskekrogen is located at Zacchariasbryggen 50 (55-55-96-55) and features excellent fresh fish and venison. This restaurant certainly has the best view of the harbor, and you'll definitely need reservations for this exclusive spot. The salmon, reindeer and halibut are delectable. 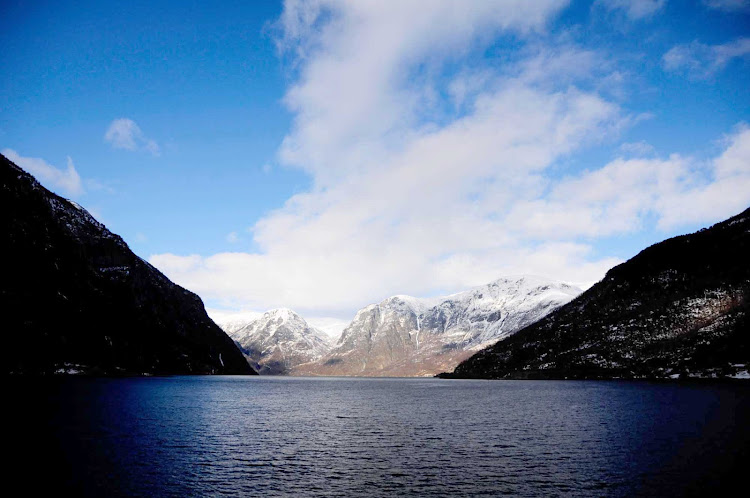 Kamil Porembiński / Creative Commons BY-SAThe Sognefjord is the largest fjord in Norway, and the second longest in the world.

Due to the city's location relatively far north, close to the northern sea and surrounded by mountains, special weather conditions occur, resulting in approximately 240 days with precipitation a year and a mean temperature of 45.7°F.

July has the highest mean temperature, 57.7°F, with August, 57.4°F following close behind. May is usually the month with the least precipitation. Considering the number of local events this month, May is probably the best time to visit Bergen, with the summer months of June, July and August almost as good. April is also a relatively dry month, although cooler than the summer months.

Bergen is a popular cruise destination and the leading cruise port in Norway, with around 330 cruise ship calls bringing more than 450,000 cruise passengers per year. Most ships will dock at Jekteviken, Dokkeskjærskaien or Frielseneskaien; you can walk to the city center in approximately 15 minutes or take a shuttle bus when available from all three of these docks.

By bus: For visitors who plan to explore on their own, Bergen's best bargain is the "Bergen Card," which can be purchased at the railway station, the express boat terminal, the tourist information center at Vagsallmennigen and some hotels. A 24-hour adult card gives the holder free transportation on all city buses and free admission or deep discounts to most of the major attractions; 48-hour cards are also available.

On foot: As mentioned earlier, most of Bergen's attractions can be easily reached on foot. From the wharf area, it's a mere 500-yard walk in an easterly direction to Bergen's other major landmark: Lille Lungegadsvann, a small lake embedded in lush gardens and statuary, surrounded by most of Bergen's major museums.

By taxi: Taxis are readily available in Bergen. Bergen Taxi is a popular local operator, and rates are set per vehicle. In other words, the more people in your group, the better per-person rate you'll get.

Language: Norwegian is the official language.

Currency: The currency is Norwegian kroner (crowns), but euros may also be accepted at some tourist destinations (you should, however, avoid paying in euros as the exchange rates may be stiff). Currency exchange is available in all banks.

Safety: Bergen has, as the rest of Norway, a generally low crime rate. Pickpockets are an increasing problem in the summer season, but it's still nothing like in larger cities in Europe. It is always a good idea to look after your belongings.

How about you? Have you been to Bergen or Norway? We'd love to hear about your experience or see your photos!

“What's not to love about Bergen, a city filled with history and culture and surrounded by mountains and fjords. It's beautiful in any weather, but when the sun shines, it's heavenly.”