Beijing travel guide: History & culture in the soul of China

Though it may lag behind Hong Kong and Shanghai in terms of economic firepower, the soul of China resides in Beijing. It has been this way for centuries. Genghis Khan's grandson, Kublai Khan, established the city of Beijing as his capital in 1267.

While Beijing can be enjoyed by every traveler, it truly rewards the adventurous soul. It's a safe city, with plenty of room for exploration. Although you'll be tempted to spend most of your time near Tiananmen Square and the Forbidden City, don't limit yourself. There is plenty to see around the city's outskirts, and a short trip to the Great Wall is a must.

Cruise ships that call on Beijing

The cruise port associated with Beijing is actually in the city of Tianjin, about 90 miles away. These ships visit Tianjin: Top things to see & do

There is more than enough to see and do in Beijing. Since you're on a limited time budget, be sure to ration your time effectively. The good news is that much of what you'll want to see is centrally located.

Tiananmen Square, site of the 1989 massacre, remains the largest public square in the world is still the city's center. In the center of the square is the Renmin Yingxiong Jinianbei, a Monument to the People's Heroes. The monument stands 125 feet high, with carvings, writings and depictions of the revolution all over it. Despite its past tragedy, the square remains the main meeting place for locals in Beijing. Nearby is the Zhongguo Guojia Bowuguan (East side of Tian'anmen Square, 010/6512-8986), or China National Museum. Ancient Chinese artifacts and tombs are on display here. 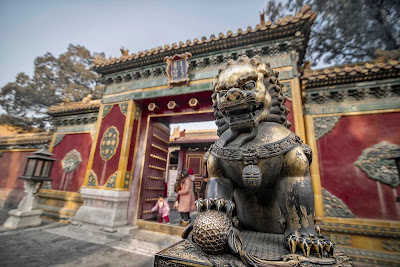 Just north of Tiananmen Square is the Forbidden City. Constructed by Yongle of the Ming Dynasty, 200,000 workers built the intricate series of walls and roads in only 14 years. From 1420 until 1911, through two dynasties, this was the center of the kingdom of China. During this time, no other building in China was allowed to be taller than the walls of the city. Even after the monarchy collapsed, the Forbidden City remained intact.

Today, there is enough to see here to last you an entire day. The Nei Ting, or Inner Palace, was where the emperor would conduct his daily routines. The Kunninggong, or Palace of Earthly Peace, was where royalty would first consummate their marriage. Another royal throne is in the Hall of Heavenly Purity, or Qianqinggong. The Taihedian, or Hall of Supreme Harmony, was where the biggest bashes were traditionally thrown. Bronze and gold adorn the room, used to celebrate birthdays and weddings. The Hall of Jewelry, or Zhenbao Guan, rivals anything you will see at the Tower of London.

Tiantan was constructed by the aforementioned Yongle at around the same time as the Forbidden City. Tiantan, otherwise known as the Temple of Heaven, was built for sacrifices to be performed during the two solstices. Pay particular attention to the symmetry of the temple. The four gates are at the exact north, south, east and west points on the compass. Enter from the south gate and rent the audio tour; it's well worth it. The Echo Wall is acoustically brilliant. Climb the bell tower and ring the bell for good luck. 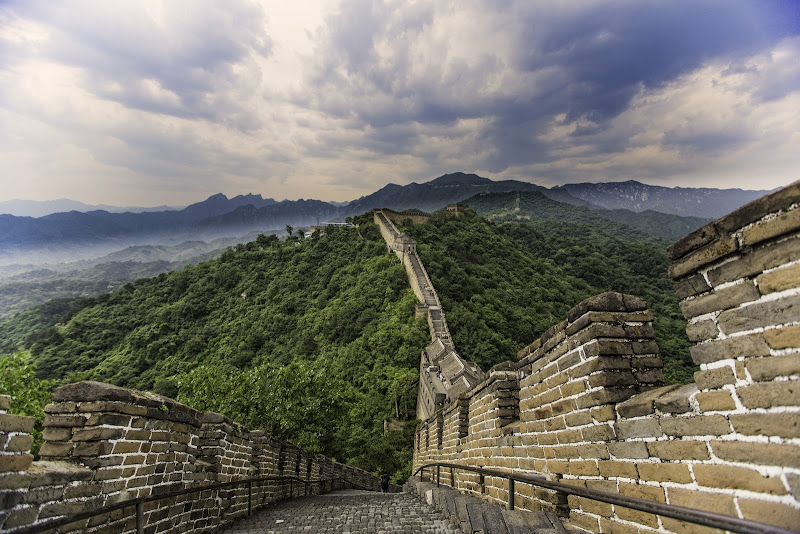 Attit Patel / Courtesy of G AdventuresIf you can make the time, a trip to see the Great Wall of China should be on any traveler's list.

Side trip to the Great Wall

The Great Wall, or Changcheng, was built over thousands of years. Over 2,400 miles of wall were constructed. Most of the earliest walls have disappeared, as they were made of wood, but the brick walls constructed during the Ming dynasty still stand. The Manchu invasion that overthrew the Mings in 1644 proved that the wall wasn't so great after all, at least as a defense mechanism. The Great Wall was looked upon with disdain for some time, with people tearing sections down for use as raw materials, but there has been a surge of wall restoration over the last two decades. If you've got limited time, just go to Badaling Fortress, the essence of the Great Wall, to take your photo.

Other sites of interest include the Temple of Heaven; a marvelous architectural structure, the Sacred Way where 24 stone animal and 12 human statues reside and the Ming Tomb, which is very different from other tombs in the Tan and Sang dynasties.

Tourists traditionally flock to the Beijing Friendship Store, (17 Jianguo Men Wai Dajie, 010-6500-3311) for all of their souvenir hunting. If you don't mind digging a little bit deeper, you can unearth some real shopping gems.

Silk Alley, at the corner of Xiushui Nanjie and Xiushui Dongjie, is a bazaar filled with silks and cashmere. Pearl hunters will find a bounty at Hongqiao Market. The best Oriental rugs are found at Beijing Carpet Import and Export Corporation (Hong Kong Macao Center, Dongsishitiao, 010-6501-2568).

Traveling all the way to Beijing without trying Peking duck is a crime, and you can find the best in town at the Four Seasons in the Jianguo Hotel. Another great Chinese restaurant is Chao Hao Wei (2/F Jianguo Men Wai Dajie, 010/6517-1916).

Of course, Beijing offers much more than just Chinese food. Sushi lovers will delight at Sansi Lang (52 Liangjiu Lu, 010/6464-5030). Moscow Café (135 Xizhimenwai Dajie, 010/6835-4454) was more popular when Communism was still raging throughout Europe, but the restaurant has maintained its charm, serving up chicken Kiev and other Russian dishes. Surprisingly, you can find delicious Mexican food in Beijing at Cabo (24 Jianguo Men Wai Dajie, 010/6515-6826). American tourists nostalgic for a taste of home should visit Frank's Place (Gongrentiyuguan Dong Lu, 010/6507-2617). Travelers with adventurous palettes should try Tibet Shambala (301 Xinjiang Xiao Lu, 010/6842-2631), a restaurant that specializes in serving every part of a yak's anatomy. Literally. 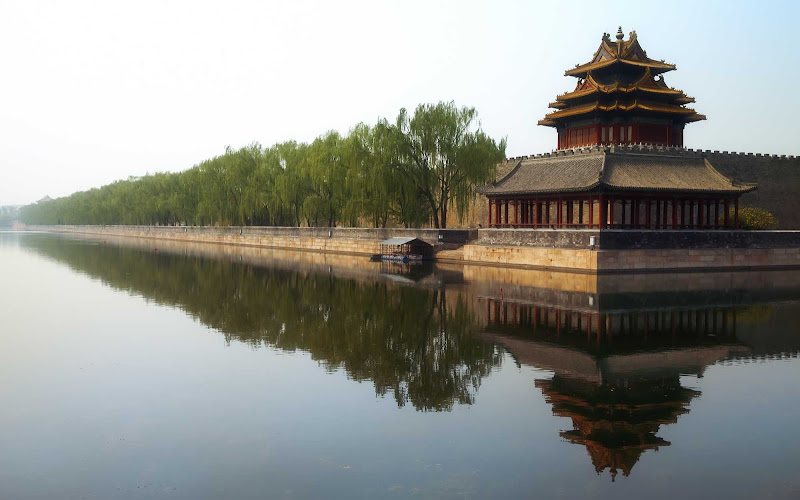 For Beijing's best weather, visit in September and October, when you'll encounter warm, sunny days with clear skies and cool evenings. Springtime is also a great season to visit, unless you're super unlucky and get stuck in a sandstorm blowing down from the Gobi Desert in the north. Beijing is oppressively cold in winter and predictably hot in summer.

If you're fortunate, your cruise line will arrange group transportation to Beijing. Otherwise, the easiest way to get there is by taxi, which takes anywhere from two to three hours, depending on traffic and the deftness of your driver. You'll want to research your options in advance.

Taxis in Beijing are plentiful and usually relatively inexpensive. Make sure that the meter is running to avoid a confrontation about your bill once you reach your destination. Buses in Beijing are neither comfortable nor efficient. Two subway lines run underneath Beijing, with stops at most tourist locations. Beijing's flat terrain is perfect for navigating by bicycle.

Language: Mandarin is the official language of China.

Tipping: Tipping is not practiced in China.

Safety: Despite its size, Beijing is a very safe city, and violent crime is extremely rare. However, tourists are often preyed upon by cheats and touts, who attempt to pull a number of scams on tourists. Be especially cautious in the inner city, around Tiananmen Square, and on the tourist-crowded routes to the Great Wall.

How about you? Have you been to Beijing, on a cruise or otherwise? What was the highlight? Have any tips? Please share some photos!

“The traditional hutongs around the Lama Temple are a fantastic place to soak up Beijing street life. Avoid overly gentrified Nanluoguxiang, a crowded strip of T-shirt and snack shops, and head instead to the maze of alleys around quieter Baochao Hutong to the west. Here, locals gather for nightly mah-jongg games and sip beer at dumpling shops beneath gray-tiled rooftops sprouting tufts of grass. Grab a pint yourself in the tree-shaded courtyard at Great Leap Brewing, a pioneer in Beijing’s craft beer scene.”