Aruba travel guide: What to do & see

The smallest of the Dutch Caribbean islands, Aruba is a tropical oasis 15 miles off the coast of Venezuela that welcomes 1.1 million visitors a year. It's hard to think of a place with more idyllic weather than Aruba, which enjoys nearly perpetual sunshine, balmy trade winds and average daily temps of 82 degrees Fahrenheit.  Wide swaths of silky white sand and warm, clear, turquoise waters along its western and southern coasts make Aruba a to-die-for beach destination. With all that sun and clear water, don't forget the underwater camera.

The island's casinos and boutiques are enough to keep many passengers happily occupied, but it's almost criminal to come to Aruba without slipping into the sea, even if just for a few blissful moments. That said, there are some intriguing land excursions on offer as well, not the least of which is Arikok National Park, which covers nearly 20 percent of the island.

Another bonus of cruising to Aruba: It's outside the hurricane belt.

Cruise lines that call on Aruba

Here are the major cruise lines with ships that visit Aruba. Contact Cruiseable for specific itineraries.

What to do & see in Aruba

The southern and western coasts of the island are where the majority of tourist activity are found, as these regions are sheltered from the strong ocean currents and winds common on the northern and eastern rocky shores.

Located on the western side of the island, Oranjestad is Aruba’s capital and largest city. Pastel-colored Dutch colonial buildings line the main streets, along with a variety of restaurants, bars and markets. There are beaches within the city limits and the shopping is excellent (see below).

Most of the best beaches are on the west side of the island, where calm waters are made for kayaking and windsurfing.

Eagle Beach has repeatedly been voted one of the best beaches in the world, and it's just a taxi ride away from the cruise dock in Oranjestad. Families who rent a car can get some alone time from their fellow cruise passengers by heading south to Baby Beach, a crescent of sand wrapping around a sweet lagoon. The water is calm and shallow, making it perfect for kids. But this is also a decent snorkeling location. Snorkel gear is available at the beach. One place to check out: the area where the lagoon opens out to the sea. The water beyond the opening has strong currents, though, so stay within the marked snorkel area. 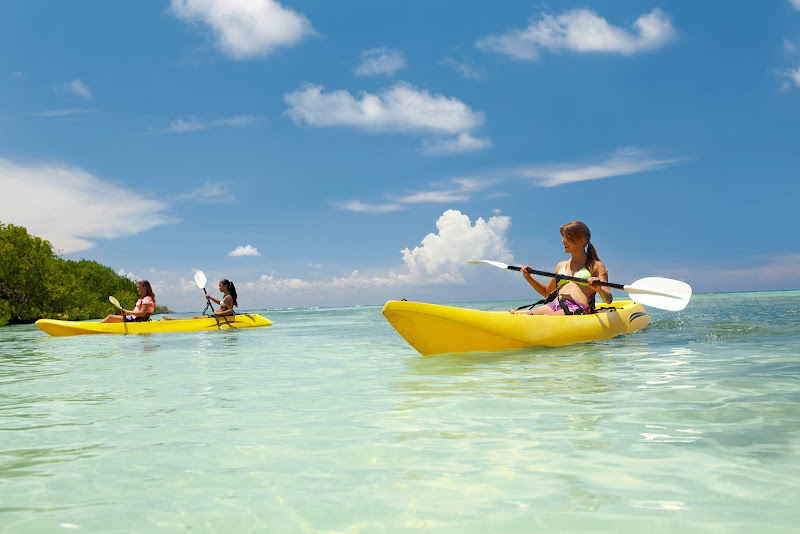 Arikok National Park spreads across 7,907 acres, offering vistas across a desert-ocean landscape and insight into the island's human, geologic and natural history. There are trails to hike, caves to explore and the Visitors Center has exhibits of some of the island's endemic animals, such as the Aruban whiptail lizard. Not endemic to Aruba but well-suited to the terrain and weather is the gangly, flightless ostrich. On tours at the Aruba Ostrich Farm, passengers can learn all about these odd creatures and get up close and quite personal with them. Afterward, check out the gift shop with its collection of items from South Africa.

Oranjestad's downtown area and Seaport Village, not far from the cruise ship dock, are the primary shopping areas on the island, where tourists can find everything from jewelry and clothing to perfume and electronics. Much of Aruba's shopping is sophisticated and upmarket. Designer fashions such as Prada and Gucci, leather goods and fine linens are among the items to be found. Keep in mind that some shops close between noon and 2 pm.

Aruba is well known for its casinos, most located in the large resort hotels. They aren't relegated only to nightlife, however, given that many open at noon and don't close until just before sunrise, and some stay open 24/7. Machines use U.S. coins or tokens of the same value, and many machines also accept U.S. paper currency. 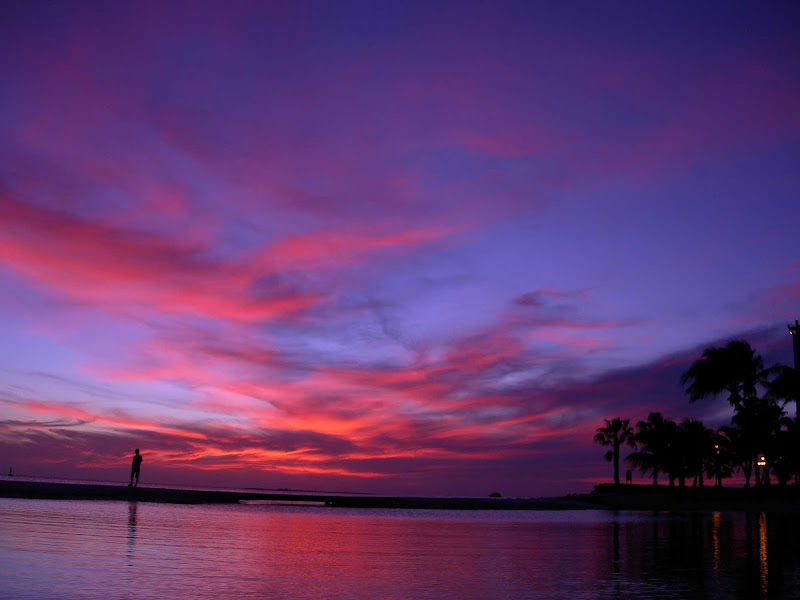 A quick ferry ride from Aruba's western shoreline, De Palm Island is an all-inclusive Caribbean water park/adventure park/island fun zone with white-sand beaches and the aqua sea all around. Everything is available here for active, fun-loving families: banana boat rides, snorkeling, helmet dives, salsa lessons, snacks, lunch, a full bar, hair braiding and, of course, souvenirs. There are also beach chairs to sink into under a shade tree for those who want a quiet spot to relax. Oddly, there are no towels so you have to bring your own.

Aruba is a kitesurfing capital so if you've always wanted to learn this exhilarating sport, here's your chance. Aruba Kitesurfing School, at Hadicurari Beach, can get you started.

Whatever you do, don't fail to get in the water. Aruba is blessed with that quintessential turquoise Caribbean water you see in posters. The island's beaches and sea are its true treasures.

With a distinct Caribbean and international flair, Aruba’s restaurant scene ranges from national fast-food chains to high-end and locally owned dining rooms. For a wonderful open-air restaurant named after the road it’s on, B55 serves up some of the island’s freshest fish, including mahi-mahi and grouper. For live outdoor entertainment along with an inexpensive meal, check out Salt and Pepper where Spanish-style tapas dishes include shrimp in mango sauce and fried brie. For an intimate dinner right on the beach (prepare for some sand between your toes), head to Flying Fishbone in Savaneta. The pesto cream wahoo and spiced pineapple with homemade chocolate ice cream are house specialties.

Aruba enjoys a tropical marine climate with little seasonal temperature variation. It’s this perpetual summer that makes the island a prime destination to visit any time of year. The near-constant sunshine and 82° F weather is coupled with light sea breezes off the Caribbean. The northern and eastern regions tend to receive harsher weather, including occasional harsher trade winds; however, overall, Aruba is considered the perfect destination for dependable island weather. 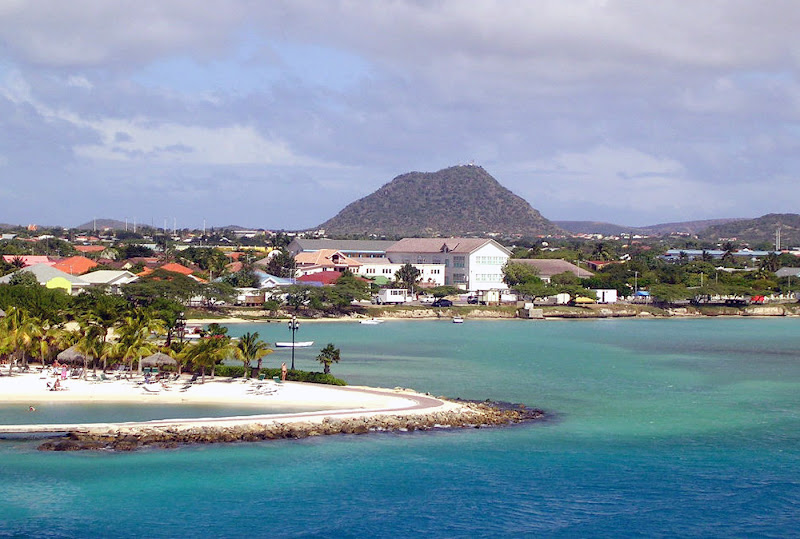 Cruise ships typically dock right in the heart of Oranjestad. You can easily explore the downtown on foot.

Taxi fares range from $10 to $30 for most locations. On Sundays there is a surcharge of $3 to the regular fare. Despite set fares, it's best to agree on the price and currency of the fare before getting in. Taxis are usually available around the cruise port; however, in most other locations drivers won’t stop if you try to hail them from the street so call ahead.

Have the correct change if you ride a bus. A one-way ticket costs $1.50 or two Aruba Florins, and round-trip fare is $2. Stops are marked by a yellow Bushalte road sign. You can pick up a schedule at the Arubus station in Oranjestad or at tourist information booths .

Language: Dutch and Papiamento are Aruba's official languages, but most Arubans speak at least four languages, including English, Spanish and Portuguese. Papiamento has its origins in a mix of African, Portuguese and Creole, but over the years Dutch, English and Spanish have been added into the mix. One Papiamento phrase visitors always hear: Bon bini, meaning welcome.

Store hours: Most stores are open throughout the day between the hours of 9 am to noon or 1 pm and 2 pm to 6 pm, Monday through Saturday.

Traffic laws: If renting a car or jeep, be aware of local traffic laws. There's no right turn on red, for example.

Tipping: Restaurants typically include a 10% to 15% service charge on the bill. If service isn’t included, a 10% tip is standard. Taxi drivers expect a 10% to 15% tip, but it isn’t mandatory.

Currency: The Aruban Florin, but most businesses in tourist areas take U.S. dollars.

Safety: Aruba is generally a safe place, but as in any foreign country, stay aware of your surroundings and your possessions and don't flash money. If you're a big winner at the casinos, ask to have a taxi called to take you back to the ship.

How about you? Have you been to Aruba? Have any tips for visitors? We'd love to hear about your experience.

“A jeep tour through Arikok National Park is a must. So is a sailing tour with Jolly Pirates. We live here, and we love this cruise.”

“Once you arrive in Oranjestad, don’t be put off by the humdrum collection of shops closest to the pier. Head over to the wild Northeast Coast to check out the Natural Bridge and Ayo Rock or take a dip in Aruba’s Natural Pool.”

“Every beautiful beach is know for its white sand and turquoise waters, but Eagle Beach in particular is described as being the widest beach in Aruba. The beach's signature and much-photographed fofoti tree lives here, and has become one of the symbols of the beach as well as Aruba itself.”

“Saddle up at Rancho Daimari for a guided horseback tour over the sand dunes of Arikok National Park to the Natural Pool, known to locals as Conchi, where volcanic rock forms a secluded oasis. Thrill seekers dive from the cliffs above, while snorkelers spot coral and colorful fish below the surface.”