Amsterdam travel guide: What to do & see

Art, architecture, history, canals, ethnic foods and nightlife — Amsterdam boasts big city chops while retaining a certain counterculture charm. Both hip and historic, Amsterdam is an eclectic mix of cyclists, street artists and musicians, stately canal houses, world-class museums and brightly painted houseboats docked along the city's canals. There are endless diversions for the visitor, everything from drifting along the canals to sipping coffee in a “brown” café and hunting for treasures in antique markets.

The main areas for tourists are the Old Centre (Centrum) and the Museum Quarter (Museumplein). Amsterdam's city center includes lively Dam Square with its street performers and vendors, the historic Jewish Quarter and the multihued floating flower market on Singel Canal.

The Museum Quarter is home to three of the most important museums in the city as well as popular Vondelpark and two upscale shopping streets, Hooftstraat and Van Baerlestraat.

Cruise lines that call on Amsterdam

Sonia Gil of Sonia's Travels suggests some five things to do in the European capital of fun.

The place to see the Dutch Masters in their full glory is the Rijksmuseum, with its fabulous collection of paintings by Rembrandt, Vermeer, Hals and others. At the Van Gogh Museum, the pulsating and vivid works of Vincent van Gogh are on display, including a riveting wall of the artist’s self-portraits. At the Stedelijk Museum, modern art takes center stage, with experimental, post-1945 works as well as prime examples from Picasso, Chagall and Kandinski. All three museums are in the city's Museum Quarter.

The Rembrandt House Museum: A reconstruction of the artist’s 1639 home sheds light on how he lived and worked, with a studio, kitchen and gallery displaying Rembrandt etchings.

Anne Frank House: The exhibits in this canal house that sheltered the Frank family before their capture by the Nazis take visitors on a heart-rending journey, evoking the experiences recorded in a diary that touched the world.

One of the city’s oldest neighborhoods, the Red Light District is best known for bordellos where ladies of the evening display their charms in picture windows. However, the Red Light District also offers historic sites such as the Amstelkring Museum, a hidden 17th-century Catholic church tucked away in an attic, as well as trendy boutiques and restaurants.

Some 2,500 charming little cargo boats have been converted into houseboats docked along the canals in the Houseboat Museum. This tiny museum gives visitors a look at what these unique living quarters are like.

Amsterdam has everything from large department stores to trendy fashion boutiques and quirky little shops off the main streets. Local specialties to look for include blue and white Delft china, tulip bulbs, handcrafted pipes, premium chocolates and aged cheese. The plentiful antique markets draw collectors from around the world. An international diamond-cutting center, the city is also filled with showrooms devoted to the sparkling gems.

Amsterdam has a lively and varied club scene, including Paradiso and Melkweg, which draw headliner music acts. Amsterdam’s best-known jazz venue is Bimhuis on the waterfront. The city is also filled with innumerable bars, coffee houses and marijuana cafes proffering a menu of cannabis selections. 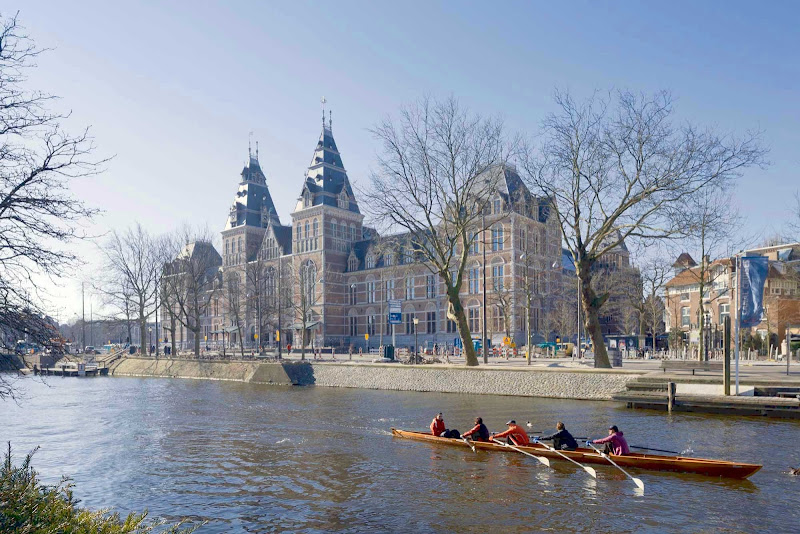 Tiptoe through the tulips: The next best thing to Holland’s famous flower fields is Amsterdam’s Keukenhof Gardens. Its beds of tulips, daffodils, hyacinths and other bulb flowers are a blaze of glory during April and May.

Hermitage Amsterdam: The Imperial Russian collections of The Hermitage in St. Petersburg are so vast that it established a satellite location in a block-long 17th-century building called the Amstelhof. The exhibits are constantly changing, but always fascinating.

Amsterdam has a cool, oceanic climate that is influenced by its closeness to the North Sea. The city remains fairly temperate year-round, ranging from some snow and ice in mid-winter to balmy days in summer. Summers stay fairly mild, with a high temperature of 71.2° F (21.8° C) in the warmest month of August. Winter temperatures are typically cool, with a January average temperature of 41.7° F (5.4° C). Peak tourism takes place in the spring and summer months.

Most ocean cruise ships dock at Passenger Terminal Amsterdam, a short walk or ride to the city center, or Felison Cruise Terminal, located on the outskirts but with bus and taxi service available.

Join Sonia Gil of Sonia's Travels for a ride through true bicycle culture in Amsterdam.

Since Amsterdam is perhaps the world’s most bike-friendly city, renting a bike at Central Station is a good option (see the video above). The old section of Amsterdam is also easily explored on foot. There's an efficient system of trams and buses, many of which leave from Central Station. A fun way to get around is on the many canal boats, some offering narrated nonstop tours and others allowing sightseers to hop on and off at designated sites along the way.

Language: Dutch is the official language, but almost everyone is fluent in English.

Safety: Amsterdam is one of the safest cities in the world. The global consultancy Mercer ranked it 13 out of 215 world cities for personal safety in 2010. Just be sure to ignore anyone in the Red Light District or elsewhere who offers to sell you drugs; they're illegal and probably fake, anyway.

How about you? Have you been to Amsterdam? Would love to hear the top highlights you came across!

“Amsterdam still looks much as it did in the 1600s the Dutch Golden Age when it was the world's richest city.”

“The Netherlands’ three essential museums are all clustered on Museum Square: Van Gogh Museum, Stedelijk Museum of Modern Art and the Rembrandt- and Vermeer-rich Rijksmuseum. … Locals head to Vondelpark – the ultimate people’s park, which becomes the city’s most populated spot on summer days.”

“REM Eiland in Amsterdam, my favorite European city. The setting is spectacular, set on stilts over the river. It was a 1960s off shore pirate radio and TV station. You cannot beat the views.”

“With the Rijksmuseum's 2013 reopening and the Canal Ring's recent designation as a Unesco World Heritage site, Amsterdam— long patronized as a hosteler's party town — is regaining its cultural swagger.”

“Ask about the dagschotel, the daily dish of meat, vegetable, and salad based on what was cheapest and freshest at the market that morning.”

“Many of the diamond dealers offer demonstrations of how a diamond is cut and polished, fun to see even if your budget doesn’t allow for a solitaire on this trip.”

“Lof: There's no menu here — the wait-staff offer you a selection of a few items that change daily — and the focus is on Dutch ingredients. You might get leg of lamb with morels one day, shrimp-filled ravioli another. Most of the produce is picked up at the local market or at an organic farm north of Amsterdam. It's a cozy spot for dinner, with exposed brick walls and water pails filled with flowers.”