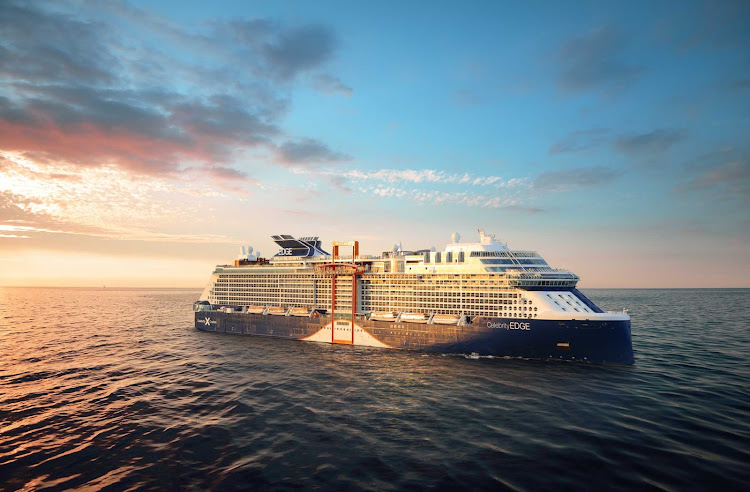 The 2,918-passenger Celebrity Edge at dusk.

I was among a group of journalists and guests invited this week to the Pacific Design Center in Los Angeles for the unveiling of the design plans for the one Celebrity Edge, the bold and striking new billion dollar baby that will usher in a new class of ships for Celebrity Cruises starting in December 2018.

Nearly all of us were bowled over by the amazing, transformational and transcendent designs created by Nate Berkus, design ambassador for the new Edge Class ships, and his team. To call it revolutionary would be an understatement: This futuristic floating hotel has gone over the edge with innovations and features unheard of in the industry.

Above is a Visual List of some top features as currently envisioned.

Defined by cutting-edge features, astounding luxury and dramatic 3-D designs, the 2,918-passenger ship will sail 7-night itineraries from Ft. Lauderdale to both the Eastern and Western Caribbean. Guests are in for a magic carpet ride at sea.

Celebrity made the most of its first new ship class in 10 years, bringing in a design and architectural dream team from around the globe to push the boundaries of ship design and to evolve luxury travel at sea. Participating in the effort were including internationally renowned interior designer Kelly Hoppen, MBE of Kelly Hoppen Interiors and visionary architect Tom Wright of WKK. The team faithfully executed the essence of Celebrity's Modern Luxury style.

Many of the most striking touches seem to be geared to the high roller who opts for top cabin suites on the upper decks, Here are a few highlights:

Revolutionary staterooms go beyond  boundaries of traditional ship stateroom balconies by creating closer connections to the ocean. The 1,000 Edge Staterooms with Infinite Verandas turn guest quarters into a seamless space with windows that retract to the ceiling at the touch of button. With the touch of another button, passengers can take complete control of their stateroom and personalize everything from lighting, shades, temperature and service – even choosing a setting to tuck them in or gently wake them. This feature adds 23 percent more square footage and 10 percent larger bathrooms than Celebrity’s Solstice Class.

The Retreat, billed as the ultimate sanctuary for world travelers, will be the ship's new private utopia with a private pool on the sundeck, butler service and an exclusive restaurant Luminae @The Retreat.

For those looking for high-end digs, at the top of the line are two new Iconic Suites situated above the ship’s bridge that span nearly 2,600 square feet and provide two-bedrooms, two bathrooms and spectacular views from panoramic windows that envelope the dining room, living room and bedrooms. They also sport 700 square-foot verandas with a 270-degree view of the ocean.

The Rooftop Garden is one of many spaces aboard Celebrity Edge that will lure guests out to relax and play. Imagined by celebrated architect Tom Wright, the Rooftop Garden, tended daily by a resident horticulturist, is the perfect place for guests to enjoy games and activities throughout the day. At night, it is home to live music and the outdoor movie-and-meal pairing of "A Taste of Film.”

Rolling out the Magic Carpet

The world’s first Magic Carpet is cantilevered from the side of the ship, ramping up the ship's distinctive profile even more. The size of a tennis court, this incredible engineering feat scales the 16-deck ship throughout the day and evening, positioning at four of the ship’s decks, transforming into a new and exciting experience at each one.

At its lowest position on deck 2, Magic Carpet is a key component to the Destination Gateway, a luxury embarkation station where guests will be whisked away aboard sleek Edge Launches.  (I’ll believe that when I see it, never experienced ‘whisking’ into launches on ships of this size.)

Celebrity Edge has just opened for bookings this week. Contact Cruiseable's travel experts for pricing, itinerary information and to reserve your spot by emailing them or calling 1-877-322-3773. Trust me, the early sailings (to such places as San Juan, St. Maarten, Cozumel and Grand Cayman) will be gone in the blink of an eye.