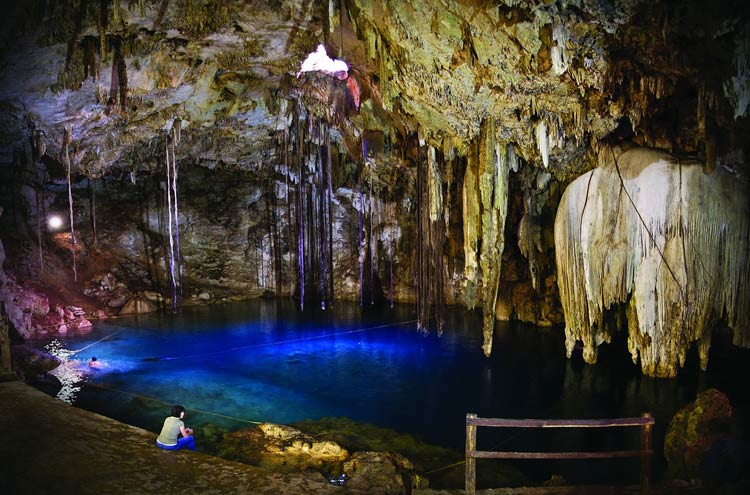 A sacred cenote in Mexico's Yucatan, one of 1,000 in the region.

Eye-popping natural wonders that are the showstoppers of the region

There are about 1,000 registered cenotes in Yucatán, our tour guide proudly declares as he ushers us around Gran Museo del Munda Maya, a museum in the city of Merida that showcases Mayan art and history.

For those who don't know, a cenote is a deep natural well or sinkhole usually formed by the collapse of surface limestone that exposes groundwater underneath.

To the rest of the world, the Yucatan Peninsula may be known for its enigmatic Mayan ruins and history as well as its sparkling beaches.

Yet to those in the know, it’s the cenotes that are the region’s showstoppers. The rich, emerald-blue waters are just the ticket for a refreshing and scenic dip during those scorching hot Yucatan days. Here are 5 scenic Yucatan cenotes that are worth a visit. 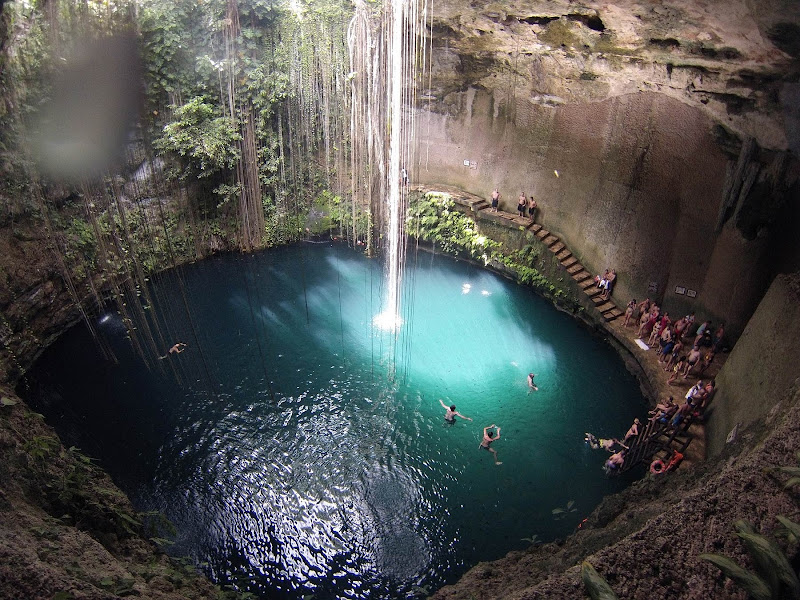 Located about eight minutes from the UNESCO World Heritage site of Chichen Itza, Cenote Ik’Kil might just be the most touristy cenote in the Yucatan. But there’s a good reason for that.

Its clear, 130-foot-deep water is home to a few small black catfish and is set 85 feet below ground level. Above is a massive gaping hole covered in beautiful foliage, some of which hang down just above the surface of the water.

It’s beautiful in a primitive kind of way, but it’s also one of the few with the best facilities and amenities, given that it's the centerpiece of Ik Kil Archeological Park. For fun, visitors have the option to get in the water from a set of wooden ladders or to jump from the stepped platform that was carved especially for that purpose. 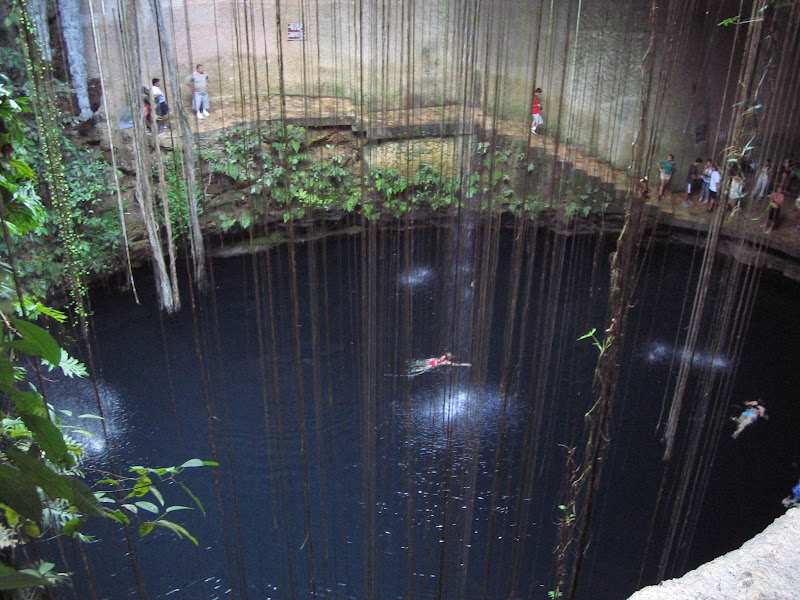 Daniel Morales / Creative Commons BYCenote Sagrado was once the site of Mayan rituals. (Click to enlarge.)

Cenote Sagrado (or the Sacred Cenote) was — and probably still is — a treasure trove of archeological artifacts dating back to pre-Columbian Maya. But its importance extends as far back as the ancient Maya: The Mayans used it for their ceremonies during which they would offer a human sacrifice to appease the gods.

A part of the UNESCO World Heritage site of Chichen Itza, Cenote Sagrado is off limits for swimming or any type of water activity. But it is a sight to behold with its massive size, lush foliage and the beautiful blue birds that constantly fly over it and nest in its outer crevices.

Ask a guide to talk about the rituals that took place here during Mayan rule. 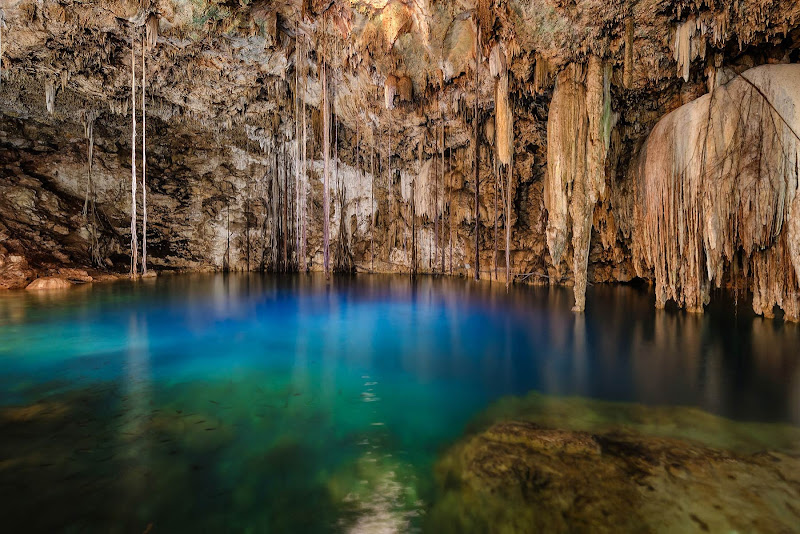 Heralded by many visitors as the best cenote in Mexico, Cenote X’Quequen (or X’Keken) boasts a gorgeous collection of stalactites, providing an epic view for those swimming in its turquoise waters. This cenote just outside the Spanish colonial town of Valladolid is set in a cave, but a small hole in its ceiling allows a beautiful ray of natural light in, hitting the water at a lovely angle.

To make it safe for swimmers and to highlight its limestone formations, there’s ample artificial light installed all around. Since there’s plenty of fish in its temperate water, you can also opt to go snorkeling.

Bonus: It’s not as touristy as Cenote Ik’Kil. 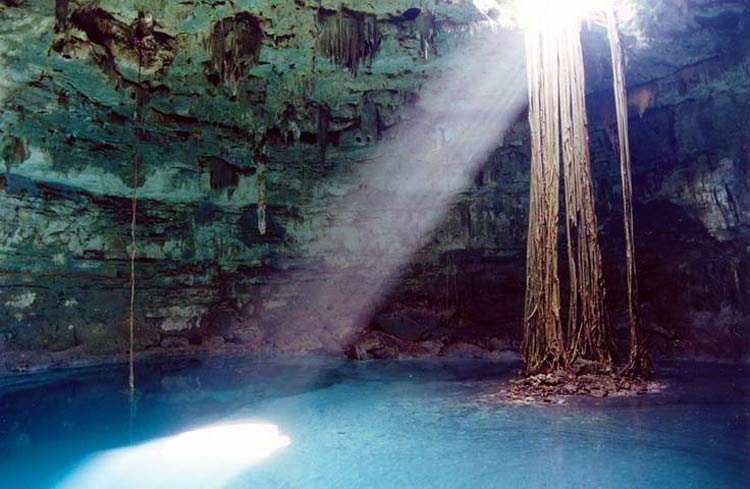 Also set just outside Valladolid, Cenote Samula is a stone’s throw away from Cenote X’Quequen. It might be less epic than its neighbor, but it still deserves a spotlight.

Like X’Quequen, there is a hole in the ceiling that provides natural light. Its best features, however, are the alamo tree roots that run and reach through its ceiling 25 feet down to the water, along with the shallow, island-like area just off the center. Before heading down for a swim, take a photo of the spectacular sight from the viewing platform.

This cenote isn’t that big. Still, for safety reasons, a rope runs across the center for visitors to hang on to if they grow tired of swimming. 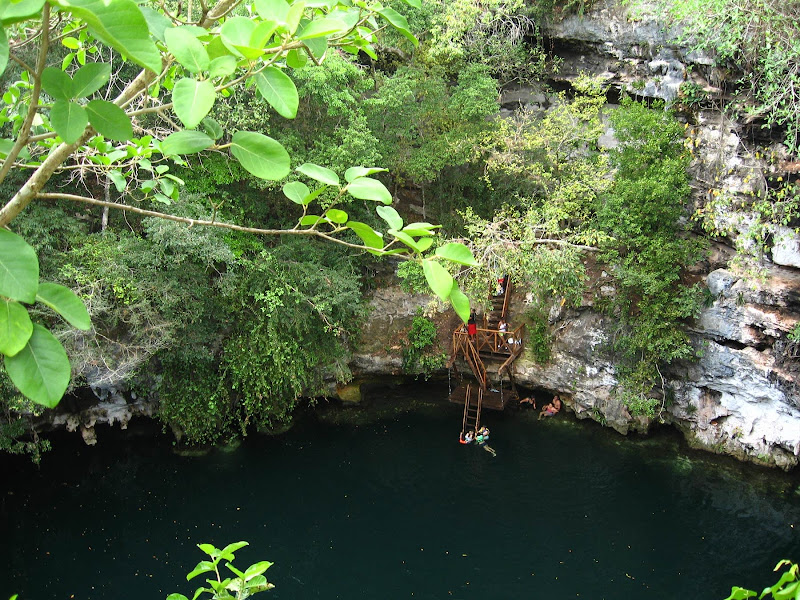 Sure, Ik’Kil has its charm, and it’s definitely a must for those visiting Yucatan. However, its lesser-known neighbor, Cenote Yokdzonot, might just be more enchanting.

Run by a small cooperative of Mayan women, this cenote is just 20 minutes from the Mayan ruins of Chichen Itza. It captivates with its turquoise waters, lush surroundings and the occasional flock of birds that play near its surface.

Tourist crowds never make it here — probably too distracted by the wonders of Ik’Kil—so it’s an ideal, off-the-beaten track stop. It’s so off the beaten path, in fact, that some days, you’ll probably have the place all to yourself. Despite that, modern facilities and amenities are available, including a restaurant, bathrooms and life jackets.