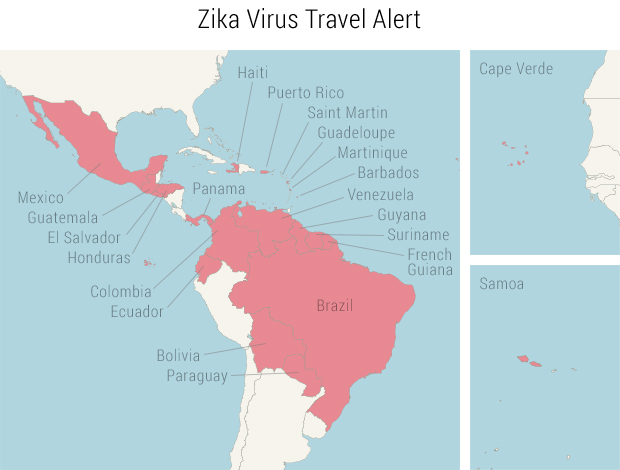 A map of destinations affected by the spread of the Zika virus.

Most cruise lines are now waiving cancellation fees for pregnant women only because of the Zika virus outbreak. If you’re going on a Caribbean cruise and are pregnant, you may want to reconsider, given reports that the virus can cause brain damage in the fetus.

Pregnant or not, everybody should take precautions to avoid being bitten by mosquitoes. Your best bets are to use plenty of strong bug repellent (DEET, Picaridin, oil of lemon eucalyptus, or IR3535) at all times, wear dark, long sleeve clothing and pants when going into port, avoiding use of perfumes and colognes and if you have a stateroom with a balcony, keep the doors closed when in port.

The virus has gone viral and the World Health Organization has declared a global crisis. Recently the Caribbean Tourism Organization and Caribbean Hotel & Tourism Association issued the following information about the Zeka virus:

How is the Zika virus impacting travel to the Caribbean?

It’s too early to tell but all indications are that there are very few cancellations as a result of Zika. The Caribbean set a record for visitors' arrivals in 2015 and all indications point to continued growth and its popularity as one of the world’s most desirable warm weather destinations.

Should I cancel my Caribbean holiday?

4 in 5 people who contract the virus never know they got it, and if you get it once you develop immunity for life.

No. [Cruiseable editors' note: We think pregnant women may want to consider cancellation even if the danger is remote.] However, as always we advise you to travel sensibly and to take the necessary precautions to protect yourself against insect bites, including mosquito bites, in very much the same way you would on any holiday in any tropical country.

The World Health Organization (WHO) and other health agencies, including the US Centers for Disease Control and Prevention (CDC), have said that Zika symptoms for the vast majority of people are mild and last two to seven days. In fact, according to the WHO and the CDC, four in five people who contract the virus never know they got it, and if you get it once you develop immunity for life.

What are some of the concerns?

Concerns have been raised about a condition known as microcephaly and its effects on the unborn children of pregnant women. However, the WHO itself has stated several times that it has no proof of a link between Zika and microcephaly. In fact, there is other research that suggests there is no link and that there are other causes of the suspected rise in cases in Brazil. There are also no reported cases of microcephaly linked to Zika outbreaks in other countries or regions. Also, according to the Caribbean Public Health Agency, microcephaly is extremely rare in the Caribbean and there are no cases linked to Zika.

How worried is the Caribbean that Zika and the extensive news coverage will impact tourism this year?

We take the health and safety of our guests very seriously. Based on the evidence, we firmly believe that the Zika virus does not pose an extraordinary threat to visitors to the Caribbean. We will continue to closely monitor developments and if fresh evidence emerges that suggests otherwise we will advise accordingly.

In the meantime, the Caribbean Tourism Organization (CTO) and the Caribbean Hotel & Tourism Association (CHTA) remain in close contact with the Caribbean Public Health Agency (CARPHA) to monitor and research the Zika cases in the Caribbean and to communicate prevention and control measures to residents and visitors, while the health authorities in our member countries are taking the necessary steps to limit the number of new cases.

Local populations and visitors alike are assured that the Caribbean remains open for business and safe for travel. The CTO and CHTA will continue to work closely with CARPHA to assess the situation, but we encourage visitors to continue with their travel plans to the Caribbean and follow the advice and precautions issued by the World Health Organization, similar to those which are provided to travelers to most tropical destinations.

The tourism organization also stated that the Zika outbreak has been concentrated in Brazil and South America, with about 1.5 million suspected cases in Brazil. By contrast, there have been around 200 suspected cases in the Caribbean, spread across about a dozen of the region’s 30-plus countries. It added that Caribbean countries and hotels continue their proactive measures similar to those used to combat other mosquito-borne viruses. Staff and guests are being provided with the necessary information so they become familiar with how it can be prevented, how it can be transmitted, its signs and symptoms. Insect repellent containing DEET is being placed in hotel rooms, or made easily available for purchase.