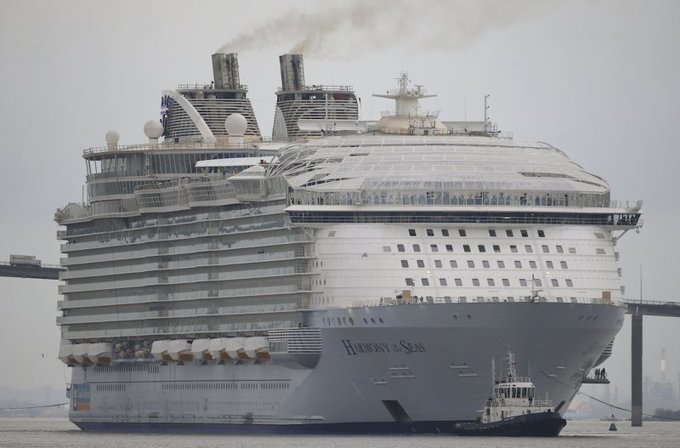 From gcaptain.com via Scoop.it:

The largest cruise ship ever built departed the STX France Chantiers de l’Atlantique shipyard in Saint-Nazaire, France on Thursday for its first set of sea trials.

The Harmony of the Seas is the third ship in Royal Caribbean’s Oasis-class. At 227,700 GRT, the cruise ship will be just slightly larger than her two sister ships Oasis of the Seas and Allure of the Seas, which at 225,282 GRT are currently the largest cruise ships in the world.

Harmony of the Seas is due back at the shipyard on Sunday following three days of trials meant to test the ship’s power and propulsion. The sea trials involve some 500 engineers and technicians, as representatives from the classification society DNV GL.

Harmony of the Seas is expected to make its maiden voyage from Europe in May 2016. The ship is designed to carry a total of 6,410 passengers and 2,300 crew.

I must admit, I do like the very large cruise ships where the ship is a destination as much as the ports of call.  Royal Caribbean's Harmony of the Seas is the third Oasis class ship for the cruise line.  I have been with my family on both the Oasis of the Seas and the Allure of the Seas and we enjoyed sailing on them very much. After dinner strolls through Central Park, the onboard entertainment like the water and ice skating shows were particulary memorable.  And even though the ships hold a lot of other cruisers, I never felt that it was crowded.

The Harmony of the Seas will spend the summer out of Barcelona and in the fall will home port out of Port Everglades.  Seriously considering a family cruise on this ship.