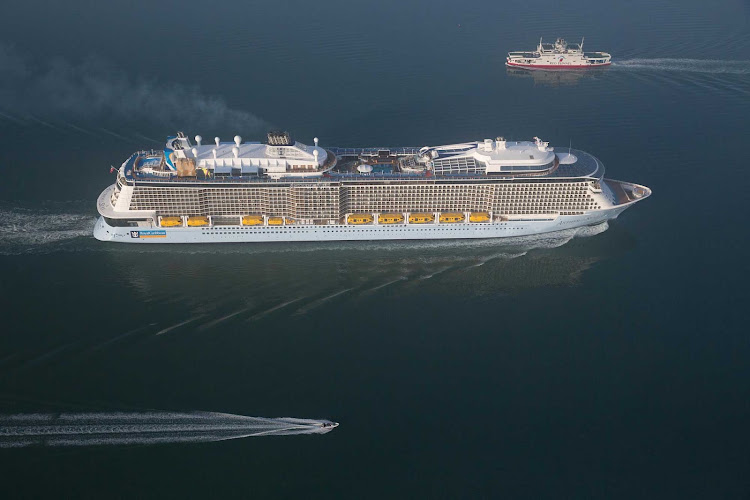 Anthem of the Seas at sea.

With roughly 100 days to go before Royal Caribbean International’s Anthem of the Seas begins sailing out of Port Liberty in Bayonne, New Jersey, the cruise line is working to build excitement around the Nov. 5 arrival in the U.S. of its newest and most high-tech ship.

At an evening event for media and travel agents on July 15 at the New York Times Center in New York City, Michael Bayley, Royal Caribbean’s president and CEO, and Mark Tamis, senior vice president of hotel operations, gave a multimedia presentation on Anthem’s innovative features. They also unveiled even more innovations and plans for the rest of the fleet.

Anthem’s U.S. Debut: The focus for this event was the 4,180-passenger (double occupancy) Anthem of the Seas and its impending arrival in the U.S. Starting Nov. 4 and for the foreseeable future, it will homeport at Port Liberty in Bayonne, just across the harbor from Manhattan.

The vessel, which Bayley and Tamis joked still has a “new ship feel,” since it was christened in April, has been sailing in Europe out of Southampton. As the newest and most technologically advanced vessel in the Royal Caribbean fleet, Anthem has all the features that are already on its sister ship Quantum of the seas, currently sailing out of Shanghai, but the line has made adjustments to make the guest experience even better.

Royal Caribbean has announced a large number of enhancements and additions to their fleet of cruise ships. For me it is nice to see that they continue to move forward and provide new and upgraded cruise experiences to enjoy.

Some of the features of the ship include:

Royal Caribbean also announced some upgrades and enhancements to their other ships, including more virtual balcony staterooms, which are inside staterooms with a video wall projecting a live feed of the ocean outside. Royal Caribbean also will debut more new studio staterooms for solo passengers, new family connected staterooms which can hold up to 10, and a four-bedroom penthouse suite.

Royal Caribbean is also working on a  program to better promote their two private islands Labadee and CocoCay.  I have been to both of these islands and can say there is something for everyone on these islands.  From relaxing in a beach chair to zip lining over the water.

Other ships on the Royal Caribbean fleet will also be upgrade.  Liberty of the Seas is to be upgraded with a new water park and slides, Majesty of the Seas will see a host of new features including water slides, poolside movie screen,  DreamWorks Experience featuring activities and entertainment with Shrek, Fiona and other favorite characters from the animation studio’s movies, and free high speed internet.

Last but not least, Royal Caribbean is also building new Quantum-class and Oasis-class ships to be placed into service over the next few years.