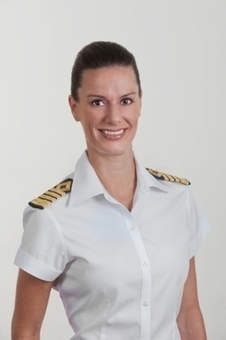 From www.prnewswire.com via Scoop.it:

For the first time in the cruise industry – and in Celebrity Cruises' history – an American female will take the helm of a mega-ton cruise ship. At 37 years of age, San Francisco native Kate McCue will command Celebrity Summit – a 91,000-ton, 965-foot ship in the Celebrity Cruises fleet, sailing between the eastern United States and Bermuda. As Captain, she will be responsible for the safe navigation of the ship and the onboard experience of its 2,158 guests and 952 crew members.

The modern luxury cruise brand, which operates a fleet of 10 ships, has elevated McCue to the position of Captain based on her 15 years of successful experience and leadership in the maritime industry. During her tenure, McCue has managed ship logistics while sailing worldwide itineraries, including Europe, Asia, Australia, the Caribbean, the Pacific Northwest and Alaska, and along the Panama Canal. Captain McCue has also served as a maritime leader while sailing several transatlantic and repositioning cruises, and played a notable role in the revitalization of ships in Singapore.

All that I can say is congratulations to Captain McCue and also to Celebrity Cruises.

The Celebrity Summit was modernized while in dry-dock in 2012.  Carrie Finley-Bajak's insight into this ship can be seen here: